We review the press your luck card game Captain Carcass, from publisher Mayday Games. In this quick playing card game, players are trying to collect as many points as possible from deep sea diving expeditions. 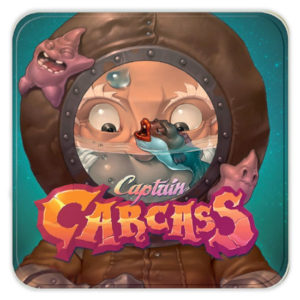 I’ve always been a fan of press your luck games. From heavier the fare like Abyss, to lighter card games such a Port Royal, press your luck games often make it to our tabletop. As someone who can be somewhat conservative with risk in real life, I think it allows me to enjoy “living on the edge” without having to deal with real world consequences.

Today we are going to take a look at Captain Carcass, a re-theme of the already popular card game Dead Man’s Draw from publisher Mayday Games. However instead of a piratey adventure, you are now a deep sea diver looking for treasure. Is Captain Carcass still a fun game? Time to find out.

In Captain Carcass, you are trying to earn the most victory points by going on some deep see diving expeditions. Each turn, you will explore the briny depths by turning over cards from the loot deck. If your luck holds, whenever you decide to return to the surface, you can take all of your loot with you. However should you reveal a duplicate type of card, a diving incident occurs and you lose everything you’ve found this turn.

Once all the cards have been drawn from the loot deck, then game ends and the player with the most points wins.

I’ve heard some rumblings that there were some component issues with the original Dead Man’s Draw. Haven’t never played that game myself, I can’t really comment on if that’s true. I can say though that I found no issues with the components in Captain Carcass. The cards are a nice, glossy card stock and the thematic artwork fit the game well.

The loot deck has 10 suits, each of which has 6 cards, numbered 2 to 7 (except the mermaids). In addition to the loot deck, are 17 diver cards. These give players a unique ability to use during the game and work well when you want to change up the game play a little. Going further, the game also includes 6 variant cards for when you really want to adjust how the game is played.

Finally, the game comes in a metal tin instead of the standard cardboard case. Whether that’s a plus or minus for you depends on how uniform you like your games to look on your shelf.

To setup the game, players need to decide if they are using the diver cards or any of the variant cards. For us, we usually just play the standard mode, and occasionally use a diver card when we want to change things up. We rarely used the variant cards, as we thought the game played well enough without them.

The first player takes their turn and then play continues in a clockwise manner.

On a players turn, they must reveal the top card of the loot deck and place it face up on the table, applying its special effects (if any). After that, the player has 2 choices. Press your luck and draw the next card, or return to the surface, collecting all the cards that were played this turn.

Should a player decide to press their luck, they then draw the next card and apply its effects. However if they draw a duplicate item, they’ve busted out and lose all the cards they revealed this turn.

Once a player has returned to the surface, the next player takes their turn. After the last card from the draw deck has been played, the game ends and players count up their points. A player will score the value of the highest card they have from each suit. The player with the most points wins.

I’ve played Captain Carcass a number of times now and found it to be a really clever press your luck card game. I enjoyed how almost every item card has some kind of power or special effect that you have to be aware of. This helps keep the game fresh as you are moving through the deck.

The items also allow for a good amount of player interaction in the game. Both the knife and the harpoon will have you messing around with cards in your opponent’s “hold”. This also helps keep players engaged even when it’s not their turn. No one likes their stuff stolen and more than once I began plotting my revenge when that happened to me. You also want keep an eye on what your opponents have so you know the best items to steal should the opportunity arise.

The other reason to pay attention to what’s in your opponents hold is to help mitigate your risk. If you are worried about drawing a second anchor, you can quickly scan the table and see how many have been revealed so far.

Captain Carcass also allows some nice combos between the cards. The key and treasure chest allow you to draw a lot of cards if you can get them both in one turn, so I like to try and steal one of the two from my opponent when I draw the harpoon. For a short, filler game, Captain Carcass has a decent amount of decisions you need to make during the game.

Of the two sets of extra cards that come with the game, I liked the divers the best. These give you a special bonus that you can use during the game. Cards like the captain help you negate the squid cards (which suck), or the saboteur that lets you collect cards your opponents drew when they bust out. While some may seem more powerful than others, they are all useful at a times and the game is short enough that we never really worried about it. But to be honest, we mostly just play the game without the extra variant cards as there is enough going on already.

Finally, let’s talk about the game’s predecessor. Captain Carcass is a re-theme of Dead Man’s Draw. If you already own that game, than there is probably no reason for you to pick up Captain Carcass unless you REALLY think you’d like a diving theme over pirate. The gameplay remains unchanged; it’s only the look that’s new.

Captain Carcass is a solid little filler game that will probably turn into one of those “just one more game” types of games. We had quite a bit of fun with it and I liked that it plays quickly, so it’s a good “wait for people to arrive” type of game. While the included variants probably won’t get used all that much, as the game has enough going on already, they are nice to have should the need arise.

Owners of Dead Man’s Draw can safely pass this one by, unless they are really into the theme. If you don’t own either, I’d say get which everyone has the theme that appeals you the most. However I can attest to Captain Carcass’s solid component quality and well-drawn artwork.

If you are fan of press your luck games than Captain Carcass should be on your radar. While not the deepest of games, it fits into the genre nicely and fills its role as a filler game perfectly.

If you’d like to get a copy of Captain Carcass, you can pick it up for $18.

Final Score: 3.5 Stars – A fun little filler game that has enough variety to hold your attention for repeated plays.