We review Cairn, an abstract strategy board game published by Matagot. In Cairn, players are moving their shamans around the board trying to be the first to create 3 Megaliths. 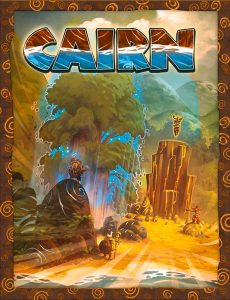 In the past couple of years, abstract games seem to be making a bit of a comeback. Maybe it started with the pretty mainstream success of Onitama and Santorini. And then I was enamored with Shobu at Origins this year. Of course, the exact definition of abstract is one of the many things gamers like to argue about. But suffice it to say, Cairn is a 2-player only game with no hidden information, no randomness, and a pretty pasted on theme. Something about forest and water shamans constructing mini-Stonehenges I think…?

Cairn is played on a 5×5 grid with each player controller five figures, called shamans. You’ll begin the game with three of them in play and two random megaliths—which represent special actions—in the middle row. The goal is to add three additional megaliths to the board.

Adding megaliths can be pretty difficult though. To do so you’ll need to move a shaman in such a way that creates the arrangement on the transformation tile. This will either be having an opposing shaman between two of yours or two of your shaman and then an opposing one. If you complete this arrangement the opposing shaman is banished to their player’s supply and is replaced by a megalith (and the transformation tile is flipped over so the requirement changes).

There is one additional way to create a megalith, simply by traversing the entire board and having one of your shaman exit on the opposing side. They will construct a megalith in whatever spot they occupied before leaving play.

Of course, you need to understand how to move your pieces around the grid to begin with. There are three double-sided action tiles in the game. So each turn you’ll have access to three of six possible actions. Whatever action tile you choose to use, you’ll flip over at the end of your turn. Giving you some control over what options your opponents have. The action tiles are:

If you ever move a shaman onto a megalith you activate its ability as well. These can allow you to move again, move another piece, or move an enemy piece. Some of them even let you move or change the megaliths. These ramp up the permutations you can go through each turn as you can potentially find a combination of moves that isn’t readily apparent on the surface.

Once any player has placed three megaliths, they immediately win the game.

I read the rules for Cairn and I thought, “Man, this is going to be really boring.” All the shamans, despite being unique sculpts, all have the same importance and movement rules. Each turn I’m only going to have three options and they all amount to moving basically one space. I thought Onitama was constrained… this felt like it was going to play itself.

Then we played. And we made some moves. And the beginning is a little methodical. But the first time you use a megalith to move another piece onto a megalith to move something else… it is magic. You’ll feel like the smartest person in the room.

Even when the megaliths don’t come into play right away, there is a lot more going on than you may think on the surface. Similar to Onitama, the action you choose to use changes what is available to your opponent. But unlike Onitama, there aren’t any actions that are obviously better than the other. They are all just situationally more useful. Maybe there is a spot that your opponent seems to need to jump over his shaman. If that action tile is on the jump over the enemy side, they are going to have to do something else or wait for you to kindly flip it over for them.

Most of the time you are moving these shamans hoping to set up the transformation arrangement. Of course, if you successfully do that, the transformation tile will flip over. Depending on how savvy your opponent is, this could be a good thing for them if they’ve tried to set up what they know the transformation requirement is going to be, rather than what it is. Effectively losing the battle to potentially win a war.

And—just to add to everything else going on—if your shaman gets banished by a transformation, the spot they are on has a megalith added to it. But, if they are already standing on a megalith when they are banished, your opponent doesn’t get to add anything to the board and therefore doesn’t get a point toward winning. So you can even sacrifice one of your pieces if it furthers your strategic goals.

Cairn was, without a doubt, a pleasant surprise for me. The rules are simple and the production is gorgeous. As is other the case with the best abstract games, the complexities are emergent as you are playing. It’s 5 minutes to teach and the type of game that as soon as you finish the first game you’ll want to play Cairn again as you will understand things a bit better. And you’ll do that again and again.

The actions are all useful in the right situations. You never feel like you have to be aggressive, there are certainly opportunities to be thoughtful and sit back defensively—especially if you are already down a point or two. And the megaliths in Cairn allow for some really fun turns where you can combo multiple things together in a way that just isn’t normal in abstracts.

Final Score: 4 Stars – Beautiful looking abstract with interesting choices to back it up.

Hits:
• Lots of emergent strategies as you become more familiar with the game.
• Wonderful minis to represent your shamans.
• Megaliths allow for cool turns.

Misses:
• Graphic design on the megaliths leaves a lot to be desired. You’ll need the reference sheet.
• Abstract with a theme that isn’t much of a theme.