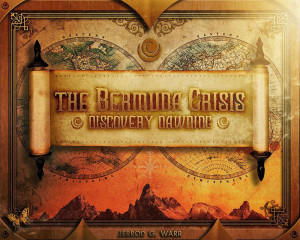 Today we are going to look at a new tabletop game currently in funding on Kickstarter. Bermuda Crisis: Discovery Dawning is a game for 2-4 players that plays in about an hour.

The game uses a resource management system and technology tree for players to explore the island of Bermuda and discover interesting powers and artifacts that can be used throughout the game. The game can also feature a healthy dose of player negotiating if players hope to be successful.

Bermuda Crisis: Discovery Dawning is a resource management game for 2-4 players. As players explore and gather resources, they are able to gain new technology that allows them to do more powerful actions throughout the game. These technology trees can be attacks by other players and there is a significant amount of direct conflict that can throw other players off their plan.

In Bermuda Crisis, you are able to take an unlimited number of actions each turn, but all cost resources that are limited. Most often, you will be buying a Mystique card. The Mystique cards represent the magic that surrounds the island, and will give you a special ability.

There are three flavors of Mystique cards:

The Venture cards are often the most interesting. When drawn, they will give you a positive ability. But often using that positive ability will cause the card to “flip” and now is detrimental. You can do use artifact resources to be able to flip the Venture back to the positive side. And other players can use their artifacts to change your Venture cards as well.

Another action you can take on your turn is to upgrade your camp. Upgrading your camp provides you a new or modified ability you can use going forward, and gives Victory Points. This will be the main use of the resource cards you gather throughout the game.

At the end of your turn, you draw four new resource cards. There is both a common and rare resource deck and you can choose which to draw from each turn.

Bermuda Crisis can end in a variety of ways. When one player has reached 14 victory points, they win. However, there is also a semi-random number of turns. There is a progress track and it moves every time an Artifact is drawn from the deck. If the end of the track is reached, the game ends immediately, and the player with the most nature points wins. Nature points are mostly acquired through having unused Mystique cards. The final end condition is the completion of the scroll. There are 3 pieces of a scroll scattered in the common resources, rare resources, and Venture card decks. If you find all three pieces, you win the game.

Bermuda Crisis: Discovery Dawning is an interesting resource management game. The introduction of the technology tree as your “base camp” allows players to focus on different paths to win the game. There are two versions of the camps, the advanced version gives players more options on how to upgrade throughout the game and allows for a much more interesting experience.

The game relies heavily on trading resources and Mystique cards with other players. In fact, some of the Catalyst cards you need to complete to earn Victory Points are dependent on completing a trade. If you play this game with people who aren’t willing to make deals, it can really bog down. It’s especially hard to make a trade when people believe it will help you complete a card that gives you Victory Points.

The Venture cards are a really interesting mechanic. They seem to be the most powerful abilities in the game, but open you up to be attacked by other players with their artifact resources. The artifact cards can also be used as basically “wild” resources, so there is a definite cost for your opponents in doing so, but it allows for quite a lot of direct conflict in what is otherwise just trying to collect the right resources to upgrade the camps.

Catalyst cards having such a wide range of possible objectives make the game pretty interesting. There are two objectives on each card, one for if you have 7 or less victory points currently, and another for if you have 8 or more. I suppose this is a little bit of a catch up mechanic making the objectives more difficult as the game nears the end, but feels bad when you invariably have someone complete the wrong objective. That said, completing multiple Catalyst cards in the same turn is pretty satisfying and many of the base camp upgrades will make it easier to accomplish.

My biggest compliant about Bermuda Crisis is the end game conditions. The scroll feels like a throw away, allowing a player who has done nothing in the current game to find a few cards randomly and win. Although, it is not the biggest offender, as it happens rarely. However, in about half of my games the game ended because the timer hit the end of the track. In this instance, the most nature points wins, rather than the most victory points. This often also feels random as everyone is focused on victory points but the game ends and we have to find out who just happens to be the winner. If the inclusion of the timer is necessary – and it does help keep the game moving—having victory points determine the winner would feel less random.

Bermuda Crisis: Discovery Dawning offers a medium weight resource management and technology tree game that plays well at all player counts. Despite some end game conditions that didn’t feel right sometimes, often the game plays out to a very tense ending. It’s imperative you play with players who are willing to wheel and deal and make some trades, as trading is really required to play the game to its conclusion without the timer running out.

If you’d like to become a backer, pledges start at $35 for the full game and stretch goals. Bermuda Crisis: Discovery Dawning is scheduled to be in backers hands in July of 2016 and you have until Friday, February 26th to become a backer. Head over today and check it out.