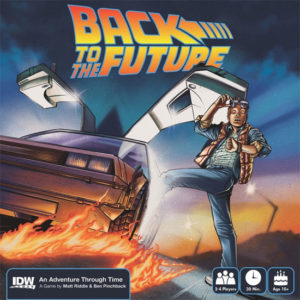 In the mid-80s, audiences were treated to an amazing movie called Back to the Future. If you are one of the six people in the world of haven’t seen this amazing trilogy yet, you owe it to yourself to check it out. Watching Doc Brown (Christopher Lloyd) and Marty McFly (Michael J. Fox) travel through time in a flying DeLorean was an experience that thrilled me as a child.

Today, we are going to be taking a look at Back to the Future: An Adventure Through Time (from here on simply referred to as Back to the Future), a new card game from IDW Games. Designers Ben Pinchback and Matt Riddle, who have previously teamed up to bring us the great fishing game Fleet, hope to recreate the feel of these epic movies.

In Back to the Future, you’ll be traveling through time in your DeLorean, trying to recreate pivot plot points from the movie. Do they capture the adventurous feeling of the movies in this card game? Let’s speed up to 88 mph and find out.

Back to the Future: An Adventure Through Time is a set collection and hand management card game for 2-4 players that takes about 45 minutes to play. Back to the Future plays well with any number of players.

In Back to the Future, players will be moving the DeLorean throughout three timelines (1955, 1985, 2015) from the movies. Each turn, players will be selecting roles, playing character cards to their timeline, and resolving ripple effects. As players place the right characters at the right moments in time, they will earn victory points for completing events before the other players can. After enough events have been completed, the victory points are calculated and the player with the most points is the winner.

For the most part, I was happy with the components that came with the Back to the Future game. The main component is the deck of 80 character cards, each of with that will represent one the six characters featured in the game: Marty, Doc, George, Lorraine, Jennifer and Biff. The cards are illustrated in the usual IDW style, using the look of their established comic book art. Some of the characters look more like their real counterparts than others, but overall I like IDW’s style.

In addition to the character cards, the game comes with six, large-sized role cards. These are used for action selection on a players turn. My biggest gripe with these is that the help text on the role card doesn’t always explain what the roles power actually is. For example, the Jennifer card say that it grants the player a discount of 1 time unit when playing a card. But it also fails to mention that a player can also play any card when selecting that role. That’s a really big omission.

Moving on, the game also comes with a set of location cards, event cards, player mats and a few piles of tokens. All are done with thematic art that fits the game well. For example, the ripple tokens are the classic “Outtatime” license plate from the DeLorean and the first player marker is Marty’s guitar. I really enjoyed the nice thematic touches on the components.

Once the game is set up and the various piles are shuffled, you are ready to begin. Back to the Future is played over a series of rounds, with each player taking their turn in a clockwise manner.

1. Role Selection: Choose one of the available roles. Each role gives the player a unique power for that turn. Players are also limited to playing character cards that match their chosen role.

2. Take actions: There are three different actions that can be taken as many times as a player wants:

If you did not play a card or complete an event on your turn, you gain a clock tower token. These can be turned in later for either three flux capacitor power or 2 time units to spend playing cards.

The game ends when two of the three event piles are emptied. At this point, players total up their victory points and the player with the most points is the winner.

I’m about as big a Back to the Future fan as there is. I’ve seen all three movies countless times and would be the first in line to buy a hoverboard if they were real. So it was with no small bit of excitement that I dove into the Back to the Future card game.

In general, I think that designers Ben Pinchback and Matt Riddle created a good game. The mechanics are very solid and most of our games have been very tight when it comes to the scoring. There are also some nice strategic moments in the game when the character roles are used effectively, especially when combined with the B-Side events.

That being said, I don’t think they created a good Back to the Future game. While the artwork is there and the components thematic, when playing the game I never really felt like the theme was tied into the game. When the box said “an adventure through time”, I was expecting something more than an abstract set collection game.

I was hoping I’d be traveling to the different time lines, interacting with people and locations from each of the movies, and possibly recreating iconic scenes. I wanted to be immersed into the theme and that just didn’t happen here. Everything felt more abstract and really I could have been playing the game with just about any theme. And for me, that’s a big miss, especially with the rich back story that the Back to the Future movies provide.

Unfortunately, that miss on theme is probably going to lead to a lot of disappointed Back to the Future fans. Even with the role selection, only a handful of the components or actions even makes thematic sense. Doc lets you move the time machine for free and Biff stealing cards are about the most thematic. The rest of them all have powers that could really be attached to anybody.

But as I said earlier, if you take away the thematic expectations, Back to the Future isn’t a bad game and there are definitely some mechanics that I enjoyed. I like how each role has a unique power, and using those will really tailor each of your turns. Sometimes you can even predict what role your opponent’s will want to select, and grabbing those before they can choose them is a great way to block your opponents from completing events before you.

The game also has a few different complexity levels. Each character card has a date on them, which specifies in what year they can be played. However, these years can be ignored if you are looking for a simpler game. For players looking for more variety, each of the event cards has a “B side” that will enact a special rule while a player is present in that year. These range from drawing extra cards to giving a discount when playing cards.

Finally, I also wish that the play time was a bit shorter. Once you cross the 30 minute mark, the game starts to feel a little “samey”. You will be repeating a lot of the same actions in the game and by the time 45 minutes have rolled around, you will definitely be ready for the end. I think half an hour would have been the sweet spot for the play time of this game.

I had high hopes for Back to the Future: An Adventure Through Time, especially because I was such a fan of the designers previous game, Fleet. But as someone who really loves a thematic games and the stories they tell, I felt like Back to the Future was too abstract of a game. I never really felt like I was in the Back to the Future universe, and even the time travel aspect was somewhat lack luster.

Which is a shame because the designers actually created a solid set collection and management game here. If you don’t go in with the thematic exceptions that I did, you can definitely have some fun with Back to the Future. The game offers some great strategic moments as you combine roles and event combos, and most plays will be tight when it comes to scoring.

But unfortunately the good isn’t enough to outweigh the thematic expectations that come with making a game based on such a popular license. If you are a fan of the movies, you are probably going to want to give this one a pass. For anyone else, Back to the Future: An Adventure Through Time can have some fun and strategic moments as long as you are OK setting the theme aside.

If you’d like to try out Back to the Future: An Adventure Through Time for yourself, you can pick it up for about $25.

Final Score: 3 Stars – While the game is can have some fun and tense moments, thematically it just wasn’t there.

Misses:
• The theme isn’t tied to the game very well
• Play time is just a little too long