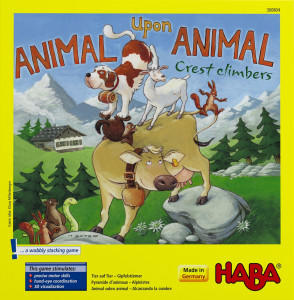 If you’ve got little ones at home, then chance are you’re familiar with games from HABA. Long known for making high quality family games, HABA has even made a few games that we play without the little ones. Earlier this year we reviewed both Rhino Hero and Animal Upon Animal. Both got glowing reviews from our writers for both families and gamers alike.

Animal Upon Animal: Crest Climbers is a stacking dexterity games for 2-4 players (ages 4+) that takes about 20 minutes to play.

In Animal Upon Animal: Crest Climbers, players are trying to get rid of all the animals they start the game with by stacking them on a mountain. Each turn, players will roll a die that determines how many animals they can stack this turn, and possibly in what manner.

Take care though, because if you knock animals of the stack, you’ll have to take them into your herd. Be the first player to rid yourself of your animals and you’ll be the king of stacking.

As usual, you’ll find nothing but high quality components in this HABA title. The main component of Animal Upon Animal: Crest Climbers are the animals themselves. There are six different types: A cow, goat, beaver, squirrel, dog, a pine tree (this counts as an animal for game play), and the snake from the original game. All are made out of colored wood in various shapes and sizes. Unfortunately, our gripe from the original game is still there, the stickers are only on one side of the animal, which seems to annoy some of our younger gamers.

The game also comes with a jagged mountain range to serve as the base to begin stacking. This replaces the alligator from the original game. Finally, players get a custom, six-sided die to roll during their turns.

Each player starts with one of the seven different types of animals. On your turn, you roll a die and the result tells you how to play this turn. These options range from: stack one or two animals, stack an animal of your opponent’s choice, give an animal to an opponent to stack for you, or place an animal next to the mountain range.

Players can only use one hand to stack the animals onto the pile. If any animals fall off during a stacking attempt, the player has to take them into their pile (to a maximum of two).

The game ends when one player has no more animals left and they are the winner.

So now that we know Animal Upon Animal: Crest Climbers plays very similar to the original game, is it still worth owning? If you enjoyed Animal Upon Animal, or just dexterity games in general, then absolutely.

If you’ve never played Animal Upon Animal, it’s actually quite a bit of fun. The rules are very easy (as expected from a family game), yet the game is still entertaining enough to keep even a seasoned gamers attention. Much like we talked about in our review of Rhino Hero, Animal Upon Animal: Crest Climbers transcends the need to play with children because it’s game play can be so much fun. This is especially true if you and your friends are enjoying in some libations. 🙂

There are many tense moments during the game as someone tries to stack an animal on an already rickety stack. If they make it, there will be an audible sigh of relief from one player, just as a groan erupts from the next who realizes they have to make an attempt. It is these kinds of tension filled experiences that help make Animal Upon Animal: Crest Climbers fun to play.

While enjoyable gamers probably won’t see this as much more than a filler game, however it does fill that role quite well. This is easily a game you can play a few rounds of while waiting for others to show up to your game night.

Now if you already own Animal Upon Animal, you might be wondering if Crest Climbers is still worth a purchase. It depends really. If you are looking for new game play, then you might be a bit let down as the rules are largely unchanged. What you do get is a new selection of animals, all in much different shapes and sizes, which alone could make it worthwhile to pick up.

The animals in Animal Upon Animal: Crest Climbers are very much different from those in the base game. The cow and the pine tree alone really make this game feel unique as those shapes get really unwieldy in the stack. In the original game, many of the animals felt similar in size, while in Crest Climbers, each one presents its own challenge when stacking.

Animal Upon Animal: Crest Climbers says it’s for age ranges 4+. I do want to point out that the 4-year-old minimum feels a tad generous. You would know your young players better than I, but if you are looking to play with the rules as written, you might want to treat this game as a 5-6 age minimum. Our 4-year-old tester wasn’t quite getting that the goal of the game was to rid yourself of all your animals.

However, I should point out that he still had a ton of fun, even though his own goal seemed to be collecting as many of the animals as possible. He was quite excited when he collected all four cows. Hey, who am I to tell someone how they should enjoy a game?

Animal Upon Animal: Crest Climbers ended up being another winner from HABA for us. I liked how the game can be either an expansion to the original game or function as a standalone game.

If you own Animal Upon Animal, I’d say it could be worth picking up Crest Climbers if you are looking for some variety in the game without having to worry about teaching your kids new rules.

If you never bought the base game, you might be wondering which version to pick up. I’d give the slight edge to Animal Upon Animal: Crest Climbers, as the increased variety in shapes and sizes of the animals make it a slightly more exciting game in my opinion.

Whether you are looking for an entertaining game to play with your family, or just a casual filler game to play on a game night with your friends, you really can’t go wrong with this best-selling game from HABA. Check it out today.

If you’d like to pick up a copy of Animal Upon Animal: Crest Climbers, you can get it for about $24.99.

Final Score: 4 Stars – A great little dexterity game that’s fun for both families and gamers looking for a quick fix.

Misses:
• Still only stickers on one side of the animals.