We review the set collection and auction game Viceroy, published by Mayday Games and Hobbyworld. In this unique card game, players must build their power pyramid using both character cards and law cards with the goal of scoring the most victory points. 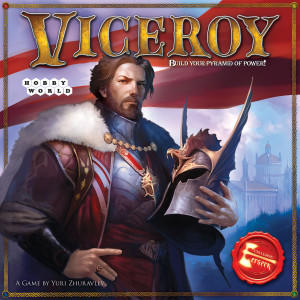 Mayday Games is probably best known for both the massive amount of card sleeves they sell, and for their dexterity games. In fact, Coconuts is a staple here at the BGQ HQ that makes it to the gaming table quite often. Lately though, it seems that Mayday has been branching out into other types of games.

Today, we are going to dig into Viceroy. Published first by Hobby World (in Russia), Viceroy was brought to our shores via Mayday Games’ Kickstarter campaign last year. Did those backers make a wise investment? Time to find out!

Viceroy is an Auction and Set Collection game for 1-4 players that takes about 60 minutes to play. We’ve found that Viceroy plays well with any of the player counts.

In Viceroy, players are involved in an “epic” struggle for control over the world of Laar. During their time on Laar, players must recruit a variety of allies and enact various laws to expand their nation.

In the game itself, players will be building their power pyramid by using character cards and law cards that they’ve acquired from the auction (and sometimes character powers). Each card will give the player a different bonus based on what level of the pyramid it is built on. The card bonuses range from gems (the game’s currency), to victory points, to drawing additional cards. At the end of the game, the player with the most victory points wins.

The components in Viceroy range from stellar to just OK. The main thing you’ll notice when you open the box is the large stack of cards that comes with the game. Each of the character cards contains a unique drawing of the character it represents, which is one of my favorite part of the components. I really enjoyed the artwork in Viceroy and think the artists should be commended.

The card quality itself does feel a little thin to me. Not the worst I’ve experienced, but I wasn’t that impressed. The Kickstarter version of the game did come with a pack of Mayday Sleeves, so sleeving them would probably be the right move if you got them.

Moving on, The game also comes with a pile of tokens to represent various rewards players will earn when building their characters, and also for the gems. Speaking of the gems, Mayday Games also sells an upgrade pack to replace the cardboard tokens with plastic, “realistic” looking gems. If you’ve spent any time here at BGQ you know that I love upgrading my games (see Level Up My Game), so the gem pack was a must buy for me. Others may be satisfied with the cardboard tokens, but I almost never pass by a chance for better components.

The gameplay in Viceroy is actually fairly easy to learn. While the game has a nice level of complexity, actually learning the game goes quickly. Each player starts with a card in their pyramid, 4 cards in their hand, and 6 random gems.

Phase 1: Auction: Each player secretly chooses one gem from behind their screen and reveals it at the same time. There are 4 different gem colors and if each player chose a different one, than they may each take the card that corresponded to their gem color in the auction area.

If two or more players chose the same gem color, those gems are returned to the supply and the auction process is repeated, minus any players that won a card already.

If a player decides not to bid, they may pass and take 3 gems from the supply instead of a card.

After the auction phase has ended, any cards that were not bought, are moved above the auction marker (with any cards already on the top side discarded) and 4 new cards are dealt face-up below the markers.

Phase 2: Building: Each player may build a card from their hand into their pyramid. Character cards have a cost on them based on the level of the pyramid the card is placed into. Costs are also cumulative. So if it costs 1 green gem to put the card in level 1, and it costs 1 yellow gem to place it in level 2, the total cost for the player would be 1 green and 1 yellow gem to place it in level 2. The player than takes the reward for whichever level the card is placed in (and only that level, bonuses are not cumulative).

Law cards work a bit different and are free to play in any level. Their effects range from gaining gems, to ways to earn victory points, to tokens.

The game ends once the character deck runs out (exactly 12 rounds). At this point, players total up their victory points. There are actually 7 different ways to earn victory points, I won’t go into them all here, but you can download the full rulebook if you want the in-depth details. And of course, the player with the most victory points wins.

One of the easiest ways to get me interested in a game is for it to have an awesome theme, especially once that’s tied well to the game. Unfortunately for Viceroy, while it has a good theme, it’s almost 100% pasted on. So if you are looking for a deep, thematic experience (well first I’d ask why you are looking for that in a eurogame…) then Viceroy may not be the game for you.

However, for the rest of us, Viceroy is a really unique game that I find myself enjoying more and more after each play. And that’s saying something because I really liked Viceroy after my first time playing.

In Viceroy there are many, many paths you can take to victory (or in most of my games, loss). With seven different ways to earn victory points, I am constantly wanting to try out new strategies. In one game I might focus on gaining as many gems as possible, but in the next game, I might go straight for collecting magic tokens. I love how each game gives you a lot of freedom to tailor your specific strategies.

Your strategy will also depend on how many players you have in the game. One of the interesting things about Viceroy is how different it plays with two players vs four. With two, the auctions rarely end up with someone losing a gem. Unless you are unlucky or both employing the same strategy, you’re more than likely to get the card you want. This makes it much easier for you to tailor your strategy and not worry about fighting over cards.

When you get up to 3 and 4 players, expect there to be a healthy amount of competition over the cards. This can quickly turn into a game of chicken if two players both really want the same card. Mind you, there is nothing in the rule book that says you can’t discuss which card you want ahead of time. So you tell everyone that “you want the blue card and have the means to back that up.” Or you could negotiate with other players ahead of time to make sure no one is throwing gems out the window. This could add an interesting level of negotiation to the game.

Normally when games scale like this, it tends to mess with the gameplay in a way that makes a specific player count a worse experience (See Elysium). However, that was one of the surprising things about Viceroy. Whether I’m in a more casual game with two players or a cutthroat 4 player game, I still had a ton of fun!

Another thing that I really liked was the amount of variety in the cards. The character cards are built in such a way that you not only have to think about which one you want, but where you want to build it. There really aren’t any bad rewards on the cards, but I usually found myself gravitating towards one type of reward or another during a game (and good luck if another player starts coveting the same rewards you are…).

Finally, I should mention that the law cards were mildly frustrating to me. They range from uninspiring to fairly broken. Two of the cards I’ve pulled out of my game because they just don’t seem balanced with the others. One gives a player a VP for each card in their pyramid (that’s a lot of points for a card that’s free to play) while the other lets you switch any token in your pyramid with another players. I’ve seen one player go from winning the game to losing due to that card. In my opinion, those are just too powerful and swinging to be left up to the luck of the draw.

Even with a few broken cards and a pasted on theme, I ended up really liking Viceroy. I enjoy games that give many paths to victory and Viceroy has that in spades. While the player interaction in the game is fairly light, especially in a 2 player game, the mechanics are rock solid and every game I have played has been enjoyable.

There aren’t many games that I own that are like Viceroy, which is a definite plus in a hobby filled with worker placement and deck building copycats. With its easy to learn rules and fantastic artwork, Mayday Games has created something special here that is going to stay in my gaming collection for years to come.

Final Score: 4.5 Stars – A creative and unique card game that keeps me coming back for more again and again.

Misses:
• Some questionable cards
• Player interaction can be on the low side