We review Unearth, the new set collection and dice rolling game from publisher Brotherwise Games. In Unearth, players are trying to earn the most points by exploring the ruins of an ancient civilization. 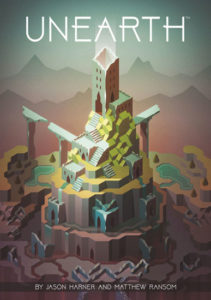 Get ready to delve down into the earth as you explore lost civilizations that your ancient ancestors constructed. You’ll be exploring deserts, islands, mountains and caves as you claim ruins from an age gone by.

That’s the theme of today’s review of Unearth, the second game from publisher Brotherwise Games (Boss Monster). Once again, the brothers have sucked me in with their amazing visuals and the question now is if the game play holds up. Let’s find out.

Unearth is a dice placement and set collection game for 2-4 players that takes about 30-45 minutes to play. Unearth plays well at all player counts.

Each player begins the game with a secret ruin card and a set of identical dice, which range from 4-sided to 6-sided to 8-sided.

There are no rounds in Unearth, starting with the first player, each player takes a turn in a clockwise manner.

A players turn consists of:

1. Delve Phase (Optional): The player can play one or more delve cards from their hand. Delve cards usually are ways the player can manipulate dice, either dice about to be rolled that turn or dice already on ruin cards.

2. Excavation Phase: The player chooses one of their available dice and a ruin card to target. Based on the roll of the dice, a few things can happen:

If the combined total of all players dice on the ruin card equals or exceeds the target number on the top of the card, the ruin card is claimed by the player who has the highest number showing on a die. Every other player may draw a delve card for each die they had on the ruin. A new ruin card is then drawn to replace the claimed card.

If the player collected a stone, it’s immediately placed in that players tableau, connecting to any previously placed stones. Once a player has created a ring of 6 stones, they may claim a monument. There are 2 types of standard monuments (lesser and greater) and a number of special monuments (that usually convey unique powers). The monument type claimed is based on the color of stones used.

Turns progress in this manner until all ruin cards have been claimed. Players earn points for collecting different and similar sets of ruin cards, points from monuments, and by having at least 3 monuments. Most points wins.

I like what Brotherwise did with their dice placement mechanics in Unearth. In many games, you clearly want to roll high to get the maximum benefits. However in Unearth, there is almost a bit of a bell-curve where rolling low will get you some precious stones, yet rolling high might score you a ruin card. Unfortunately, that leaves a middle ground as no-man’s land where you get no stones and a low chance of claiming the card. It does do a nice job of creating tension, as many times rolling above or below a certain number can mean all the difference to you.

And that is one area where Unearth suffers a bit, with the randomness. The obvious move would be to point the finger at the dice rolling, yet I have to give Brotherwise credit that many of the Delve cards can help mitigate that (assuming you can draw the right ones). Yet I can’t tell you how many times I’ve needed a specific color stone to come out of the bag in order to finish a monument and had it not shown up. The other area is with the ruin cards buried at the start of the game. With only 5 of each color, you might be working towards a set and never get access to more than 2 cards.

Moving on, Unearth also does a great job of keeping players interested. Turns go by quickly and most players will be paying attention when it’s not their turn, as someone claiming a ruin can offer benefits. You might even claim a ruin when it’s not your turn if someone completes it. So between that and the delve cards that have you manipulating your opponent’s dice, Unearth actually has a healthy amount of player interaction in a game I wasn’t expecting much of.

One of the highlights for me with Unearth has to be the absolutely breathtaking artwork from artist Jesse Riggle. It captures your imagination and I never get tired of staring at those ruin cards. I’m sure it will also remind plenty of gamers of Monument Valley for those familiar with the iOS title. Yet as much as I love the artwork in Unearth (which is a lot), I will say that the theme is fairly pasted on. Players are rolling dice, playing things, and collecting sets. This is a euro game through and through and I never really feel like an explorer.

Unearth is one of those games where there are quite a few paths to victory. The best way is to collect sets of similar color ruin cards, which exponentially increase in value the more you get. However this is also the easiest strategy to have blocked if your opponents are paying attention. You also run the risk of cards not being there as 5 are secretly buried at the start of the game (10 with 2 players).

But I liked that even if you constantly are rolling low and not claiming ruins, you can still earn a lot of points from monuments, including some with special abilities. I think a lot of thought went into the scoring rules for Unearth.

Unearth was quite the creative endeavor from designers Jason Harner and Matthew Ransom. From the amazing visuals to the unique game mechanics, this one checks off a lot of boxes for what I’d look for in a lightweight euro game.

One thing I didn’t mention above is that Unearth can sometimes feel a bit long, as there isn’t too much variety in the turns. Near the end of the game, it can start to feel like you have been doing the same thing over and over, so I would probably have preferred the game’s play time cap out at 30 minutes, rather than 60.

Yet the game is still fun, has excellent mechanics and the player interaction in Unearth can also be as casual or as nasty as you want to make it. I’ve seen two players use handfuls of delve cards to fight over a single ruin card. I think Unearth will appeal to a lot of eurogamers out there and is worth a look.

Final Score: 3.5 Stars –  A visually beautiful and solid eurogame that’s easy to pick up, just be aware the game can get a bit repetitive near the end.

Misses:
• Pasted on theme
• Game can get a bit repetitive by the end