We review the unique city building game Machi Koro. In this easy to learn, dice rolling game, players are trying to be the first to build all 4 of their city's landmarks. 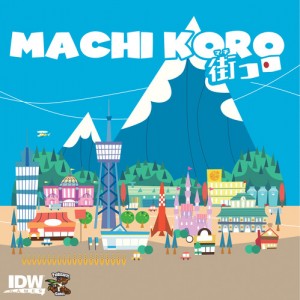 Lately, we’ve been seeing an influx of games first published in Japan. The Land of the Rising Sun seems to be putting out some really interesting titles and I’m glad that they are finally making their way here.

Machi Koro, which according to my random googling, appropriately translates to “Dice Town”. It’s a city building game where players roll dice, active buildings, and earn money. It’s a simple game, yet has some engaging mechanics. However there is no shortage of city building games on the market today. Is Machi Koro different enough to warrant a space on your game shelf? Let’s find out!

Machi Koro is a dice rolling and city building game for 2-4 players that takes about 30 minutes to play. Machi Koro plays best with any number of players.

Machi Koro is a light game that’s easy to learn and play. Each player starts the game with two buildings and must be the first to build all four of their landmarks to win. Each turn, a player rolls 1 or 2 dice, activates any buildings with a matching number, and then uses their money to buy new buildings from the market. This can lead to powerful combos that can ultimately secure them a victory.

There isn’t a whole lot to talk about with the components in Machi Koro. The thing I liked the most with the game is the artwork on the cards. It has an almost cartoony feel to it that works really well for this game. Machi Koro is a light game that has a bunch of randomness to it, so it seems to fit in my opinion. The cards themselves are on a nice stock and should hold up well, especially because there isn’t really much in the way of shuffling or abuse the cards might take.

Also included are a number of cardboard coins in 3 different denominations. I wasn’t too pleased with the printing on these coins as many were printed off center which makes the designer in me cringe. Finally, the game comes with a pair of six sided dice. Personally, I would have liked to see 2 dice per player, so you aren’t constantly passing them around. I fixed this by taking some of my many extra dice and throwing them in the box.

Learning Machi Koro should take you minimal time and effort. For now, we are going to talk about the standard rules that come in the box. I will touch on the variant rules later though.

Each player starts the game with the same two buildings (wheat field and bakery), 3 coins, and 4 unbuilt landmarks. One player is chosen as the start player and turns continue clockwise after that.

1. Roll dice: The player rolls one of the dice. They may roll two dice after they have built their “station” landmark.

3. Build new Establishments: A player can spend their money to buy any of the cards in the building market, or one of their landmarks. If a player buys a duplicate card, they both will activate when their number is rolled.

And that’s it. The first player to build all 4 of their landmarks wins.

If you can’t tell from the rules summary, Machi Koro is a really random and luck filled game. The way the dice fall is going to have a big effect on the outcome of the game. Smart players can help mitigate that by the way they spend their money. The obvious move is to buy buildings so you have all the numbers in the range covered. This allows you to have a nice income system going no matter how the dice fall.

It’s in this way that Machi Koro also has a little bit of engine building to it. Early on, the game most players are hoping for the same numbers to be rolled. However, once you start building out your cities, you can formulate your own strategies. Do you focus on just a few numbers and hope for the windfall roll? Or maybe you try and get a broad spectrum of numbers with the “slow and steady” approach to income.

However, that’s also where one of the flaws of Machi Koro (with the standard rules) rears its ugly head. There are some really powerful combos in Machi Koro and it’s pretty easy to just cheese those over and over every game. This can pretty much kill the game’s replay value. Because every card is available at the same time, once you discover one of these, there is not much reason to move on to a different one. I’ve seen a game finished in 15 minutes because of this.

However, I wouldn’t call Machi Koro dead just yet. There is something called the “10 card variant” (made official with the release of the Harbor Expansion) that makes playing the game much, much better. In this variant, cards are dealt out into the building market until there are 10 different ones. If a duplicate card is revealed, it gets added to the appropriate stack. This changes the dynamic of the game greatly, and much improves it in my opinion. Players now have to be flexible with their strategies and can’t just spam a couple of powerful cards. It also really adds to the replay value of the game because different cards will always be available at different times during the game.

That being said, I still really enjoy Machi Koro. It’s quick, easy to learn and makes a nice gateway or family game. I’ve played with gamers and people who are still cutting their teeth on Monopoly and everyone seems to enjoy it. No, there really isn’t much deep strategy to be had here and luck will play a huge part in the game, but for a light game, I’ve found it can be quite fun.

One other nice thing about Machi Koro is the low downtime in the game. Turns go by very quickly, and most players should stay engaged even when it’s not their turn. The cards lend themselves to a decent amount of player interaction, whether it’s from stealing or just gaining money from the bank.

I will say that I do consider the Harbor expansion to be almost essential if you plan on owning Machi Koro. In addition to the new setup rules, it adds a number of cards that really increases the replay value and complexity of the game. The new cards in the expansion help the game feel a bit more unique each time you play. They also introduce a few new mechanics that are quite unique to the cards found in the base game.

While not without its flaw, I’ve found Machi Koro to still be a pretty fun game. The game plays quickly, is easy to teach, and should appeal to just about anyone. It’s probably a bit too long to be classified as a filler game, but it you are looking for a solid, light weight game that you can play with just about anyone, then Machi Koro absolutely fits the bill.

While the rules as written aren’t the best, the variant rules can help turn this game into a solid play experience that should make its way to your gaming table often. The game is fairly random (but nowhere near the terrible “Fluxx” level), so be warned if you are a heavy strategy gamer. However for the rest of us, Machi Koro can be a good amount of fun.

If you’d like to pick up a copy of Machi Koro for your dice rolling pleasure, you can get it for about $20

Final Score: 3.5 Stars – A light game that’s very accessible, but feels almost like it’s missing something until you get the Harbor expansion.

Misses:
• Needs the 10 Card variant for better play
• Doesn’t shine until you get the Harbor expansion