Home Game Reviews We Need To Talk Review
Review of: We Need to Talk

While I expect that real interventions are pretty serious business, We Need to Talk is a party game based on the idea of staging interventions for… less serious… problems. The lightheartedness of the afflictions makes the game friendly for all ages. But the party game market is a crowded one, so does We Need to Talk belong in your personal collection?

In We Need To Talk, players will take turns being the intervened party and try to deduce what exactly their dysfunction is based on clues from other players. Generally, these are all very silly things like “Uncontrollable Interpretive Dancing” or “Washing Spoons at a Stranger’s House Before Eating”. Unlike a glut of recent party games, We Need To Talk goes out of its way to dial up the weirdness rather than go for adult-orientated themes.

Each intervention is surprisingly very structured. Everyone, except the afflicted, will know exactly what the intervention is about. In the first round, you’ll broach the subject by just giving a word or two description. For that compulsive spoon-washer, you might say, “We need to talk about your dishwashing habits,” or perhaps “germophobia.”

In subsequent rounds, you’ll let the person know how their actions make you feel and then offer a solution to fix their problem. Each time you give a clue you’ll earn some points. If the intervened attempts to guess, you’ll get another token worth more points. The key, however, is to not give away the problem entirely. If the afflicted guesses the topic of their intervention correctly, the last player to give a clue scores no points.

After all, players have had a chance to be intervened, whoever has accumulated the most points is the winner. In a game with more than 6 players, the structure changes a bit so not every player will give three clues each round, but generally, the structure is the same. 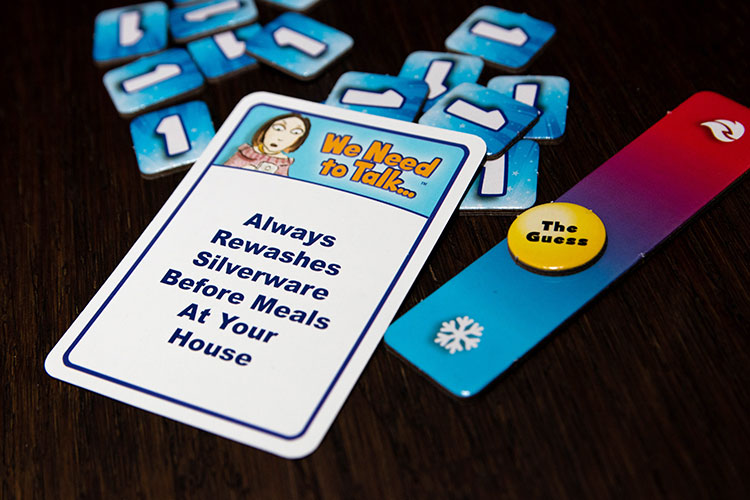 Reviewing party games isn’t necessarily an easy task. They often ask a lot of their players and how enjoyable they are has as much to do with the people in your group than the game in the box. We Need to Talk isn’t significantly different in that regard. From the overview, you likely know if this is something your group can have fun with or if you’ll never be able to get this to the table.

That said, I think We Need to Talk does a few things that make it stand out. Having victory points in party games is always a bit awkward, but the system here works pretty well. The intervened is incentivized to guess their problem as soon as possible, to keep the majority of points for themselves. They can’t just haphazardly guess as each attempt will give additional points to their opponents. Not that most people are (or should be) super worried about scoring the most points in a party game, but it at least feels well thought out. 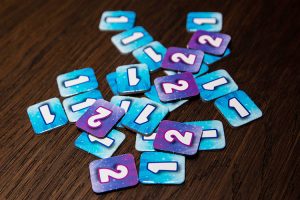 We Need to Talk also has family-friendliness on its side. You can play with grandma without blushing. You can invite your younger nieces and nephews into the game as well. It’s silly and you’ll be laughing a ton if your group gets really into it, but it’s not crass.

On the flip-side, We Need to Talk gives players a framework but those that prefer a strict adherence to rules are going to be frustrated at times. The only hard and fast rules in clue-giving are that you can’t use any of the words on the card itself. It’s up to the players at the table to determine if the clue you give is on-topic enough to be appropriate. The same problem exists with the intervened guessing their affliction. It’s improbable they would ever guess the exact wording, so leeway is required and the group has to determine what is close enough.

We Need to Talk is a fun party game for groups of all ages that are willing to role-play their crazy problems just a bit. For a family gathering or even a game group that just wants to have a couple of drinks and spend an evening laughing this will be a hit.

Rules lawyers, those who just can’t cut loose, and people looking for adult-themed innuendo will be less pleased with We Need to Talk. Maybe we’ll have to have an intervention for them.

Final Score: 3.5 Stars – A unique party game that is family-friendly and generates plenty of laughs.

Misses:
• Lots of gray area in the rules.