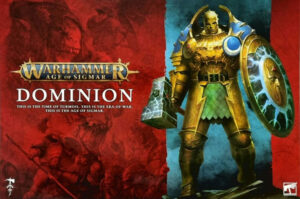 The box comes with a beautifully illustrated core rule book, 60 push-fit miniatures, and stat cards for said minis. If you plan to play a small skirmish game with the miniatures in the box it will require two players for about 2.5 hours.

If you have played Age of Sigmar before or you want to read all about the amazing rules for this edition, I will do a deep dive on them in my next review. This review will focus on what is in the box and my thoughts on what’s included.

With Age of Sigmar 3.0 releasing on July 3rd, this will be the perfect time to jump in and learn the game. As stated above, this box comes with two factions, the Stormcast Eternals in their shiny new armor and the Kruleboyz, a new more cunning type of orc that has emerged from the swamps of the realms.

As a warning: if you plan to play a skirmish game using only the miniatures in this box the game will be uneven points-wise. The Stormcast faction weighs in at 1360 points while the Kruleboyz come in at 1070.

Games Workshop has included the war scroll cards for the units as well as some scenarios in the core rulebook to play through. Each army in the box comes with a multitude of heroes and units for them to lead.

The war scrolls cards included have the points (for the models included) and some allegiance abilities for each faction as well.

The core rulebook with the exclusive Dominion cover is included as well. 70% of the book is dedicated to the lore so far in Age of Sigmar with the last 30% dedicated to the new rules. For new players, I would suggest taking the plunge into the story section and catch up to where the lore is at now. It will make the units in the box come alive.

Game Workshop also included a unit guide that gives backstories to each unit in the box. 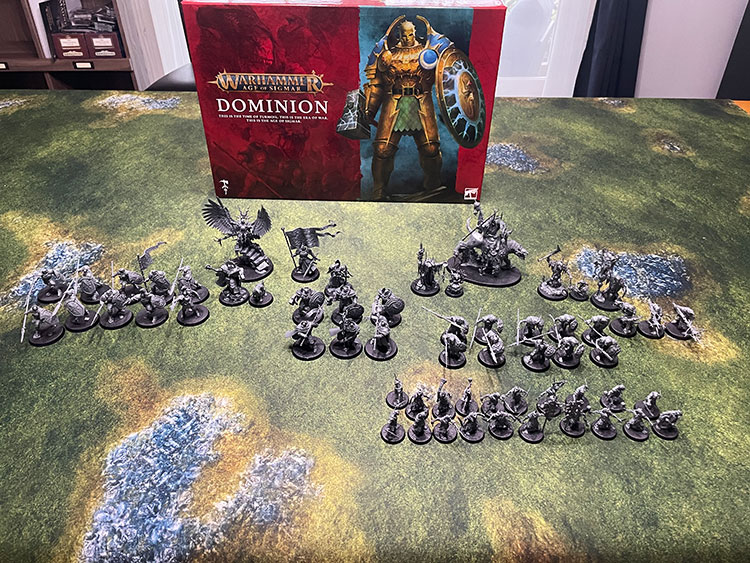 When I cracked into the Dominion box I was blown away by the massive amount of content. It really lived up to the hype that Games Workshop had been building.

Games Workshop is known for pushing the boundary with miniatures in both detail and concept. I would have to say that they have truly delivered on setting the bar even higher. Some models of note are the angelic Yndrasta and of course the ferocious Killaboss on Great Gnashtoof (with an honorable mention for the Swampcalla Shaman with his Pot-grot). You can tell that each miniature was carefully designed and cast, making them not only beautiful but functional with the ability to build the models with push fit only. 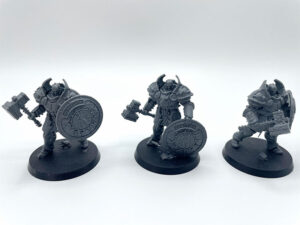 The core rule book included was also immaculately redone for third edition. The lore at the front of the book is an engrossing read with a transition story for old players and a great introduction for new players into the Age of Sigmar. The rules for the game are (mostly) clearly written with reference numbers allowing for a quick lookup. The rules for narrative games have also been rebuilt from the ground up and deserve their own deep dive review to fully appreciate how epic Games Workshop has made storytelling in the mortal realms.

The small booklet they provide to give background on each unit in Dominion is also a quick read and can get you more invested in the models hitting the table. 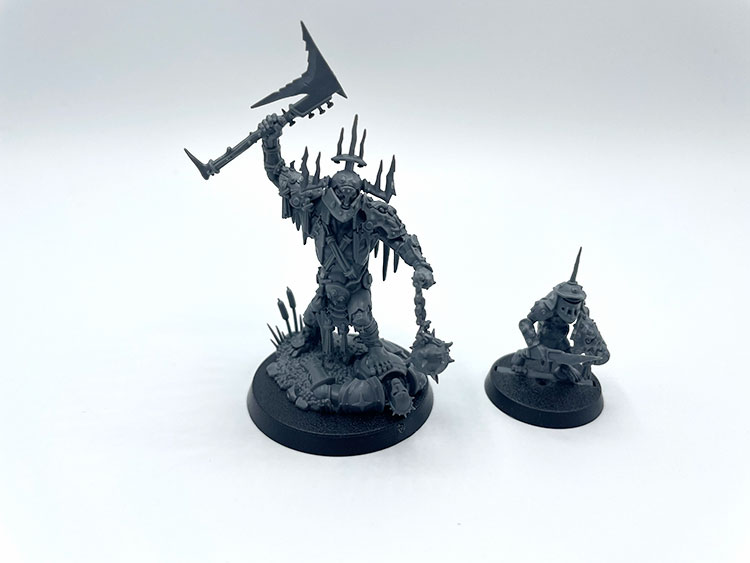 If you have been eyeing getting into Age of Sigmar or even if you have been curious but not sure, this is the box to buy to launch you into the game. With amazing miniatures and a comprehensive rulebook, this box delivers on the value, giving you the core pieces to a Stormcast Eternals force or a Kruleboyz force. As a veteran player, it has prepped me to jump into Age of Sigmar 3.0 ready to fight titanic battles in the mortal realms. It has also gotten me excited to see what the future holds for the models and armies in general.

Keep a lookout for my reviews on the core rules changes for and narrative gaming for Age of Sigmar 3.0!

Final Score: 4.5 Stars – A great starter box with an enormous value that you should buy to start your Age of Sigmar journey.

Hits:
• Models are top notch and push the bar higher for Games Workshop.
• Core rule book is beautiful, and the story is epic.
• Value for money is above and beyond most Warhammer boxes.

Misses:
• The box has a point miss match value that can deter out-of-the-box games.
• Some wording in the rulebook can be a bit confusing for newer players.