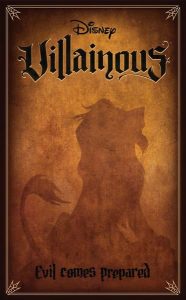 Last year I reviewed the great asymmetrical card game Villainous from Ravesnburger. This game allows you to embrace your inner wickedness and take control of one of a host of Disney villains. As much fun as it was being evil, my chief complaint about the core set was the lack of Scar for a villain. It’s a scientifically proven fact that The Lion King is the greatest Disney movie ever.

Well fret no more because Scar has finally gotten his due in the Evil Comes Prepared expansion. This misunderstood lion joins Yzma and Ratigan as new player options for Villainous.

Evil Comes Prepared is a stand alone expansion, which means if you only want to play these three characters, you can completely ignore the base game and just buy the expansion. Everything you need to play the game is in the box.

As mentioned above, the three villains that come with the set are Scar from the Lion King, Yzma from The Emperors New Groove, and Ratigan from The Great Mouse Detective. Why these choices? When I talked with Ravensburger at Gen Con this year I was told that Scar was the number one choice by fans in a poll for which new villain to add (obviously). But Ratigan was chosen because he was the number one write-in candidate. Interesting huh?

Evil Comes Prepared doesn’t introduce any new mechanics to the core gameplay of Villainous. Everything you love (or hate) about the game is still here. What’s new are the new villains to choose from and their goals.

Scar is the most straight forward of the group, and I’m sad to say, probably the least interesting of the group to play. His objective is simple. Build up a pile of hero corpses. Basically, he needs to first take down Mufasa and then a number of other heroes. Once he does, he rules Pride Rock and wins. That’s pretty much him in a nutshell. Use your hyenas to attack the heroes. He does have cards to help him fish through the Fate deck in case your opponents are being cagey about playing heroes for you. Overall I was a tad bummed his goal wasn’t a bit more interesting.

Moving on, Ratigan is actually one of the most fun villains of the group to play as his objective can actually change during the game. His main goal starts out with him needing to get the Robot Queen to Buckingham Palace. Yet during the game, it can change to needing to defeat Basil instead. I haven’t seen The Great Mouse Detective in forever and a day, but this is along the lines of the plot of the movie if I remember correctly. Regardless, Ratigan has a host of items and tools that will help him achieve his goal. He also has a secret lair that has no icons that the heroes can block, which makes it a good dumping ground for those disruptive heroes.

Finally, Yzma is the most unique of the bunch. Her main objective is to defeat Kuzco with Kronk. However, instead of having a single Fate deck, she has four, one tied to each of her locations. So first, she has to dig up Kuzco out of whichever Fate deck he is hiding in. Then she has to use her Kronk ally to defeat him, However, if Kronk gets too powerful, he can actually turn against you. For what it’s worth, I’ve never seen the movie The Emperors New Groove, so I have no idea if this is thematically accurate or not. Regardless, Yzma was still fun to play.

If you are a fan of Villainous and taking control of these iconic villains, then Evil Comes Prepared is an easy add. It remains 100% true to the core gameplay of Villainous, just more of the stuff you love. If you weren’t a fan of the game, then there is definitely nothing here that will change your mind. I found the new villains mostly interesting and diverse, even if the signature villain of the pack was a tad dull. For those new to the game, you can actually jump right in here if you are really intrigued by one of the villains in Evil Comes Prepared with no need to buy the core game.

Hits:
• Everything you need is right in the box
• Yzma and Ratigan were really interesting
• Art is fantastic as expected