We review Vast: The Crystal Caverns, an asymmetrical board game published by Leder Games. In Vast, players each take on a wholly unique role as they delve into the dungeons to try and achieve their specific victory condition. 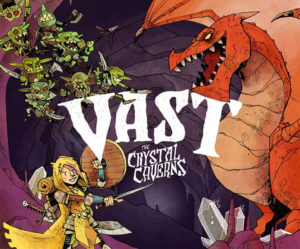 One aspect to gaming which new gamers are not initially focused on is the relative ease of which certain games can be played. The ability to get a game “to the table”, as it were, is a critical judgement factor in deciding whether a game is worth investing time and money. A game that takes so long that players can only schedule a long dedicated evening for it is a good example.

A relatively recent game which tests this concept is from new publisher Leder Games, so named by game designer/publisher Patrick Leder. Vast: The Crystal Caverns (Vast) is a unique experience. This title presents a dungeon crawl with five asymmetric sides. The tropes of fantasy are tested by players who take on the roles of Knight, Goblins, Dragon, Thief, and, last but not least, the Cave itself. Each side has a unique action system and turn structure in addition to having goals that relate to the other players.

Vast supports up to five players at a listed 75 minute play time. This time does not factor in teaching, nor does it consider inexperience with this type of game. Game time will certainly vary higher from group to group. Players aiming for the best player count will only want to play at 4 or 5 players. A good experience can be had at 3 players, and those eager to learn the rules would do well to play a few games at that number.

Explaining the entire concept of the game involves a brief description of each of the five sides in play. In general, various creatures and/or heroes find themselves at odds inside a cave littered with crystals and treasures. Each side has a separate goal depending on which other sides are also in play. The general game structure is one of continuous rounds until one side fulfills their win condition.

Knight: This character’s main goal is to slay the Dragon, which slumbers in a cavern level below the Cave’s main map. Using an action selection mechanism, the Knight’s operation is relatively straightforward. Move around, complete side quests, allocate some actions to attacking with bombs, and the Knight can eventually defeat the Dragon.

Goblins: The main goal of these creatures is to slay the Knight. They can attack the Knight at various points by alternating activation of Goblin tribes which grow and shrink in size. The Goblin player uses cards to enhance their tribes on the map and grant them special abilities with monsters.

Thief: One of the more unique characters, the Thief has a more standard game similar to the Knight’s allocation of attribute tokens. Acquiring treasure and returning it to the Cave entrance progresses the Thief’s mission. As each treasure token is added to the Thief’s stashed treasure (on their player board), new abilities are gained and enhanced. The Thief wins by collecting 6 Dragon Gems and/or Treasure tokens.

Cave: The Cave is not the last player in turn order, but this player has the most unique objective. As other players search and discover items in the Cave, this player places out new tiles. In addition, they also get a turn drawing tokens from a bag which they spend on abilities. The more Treasure and Crystal Tiles that exist in the Cave at any one time increases the rate of Cave actions, including speeding up the expansion of the Cave. Once all tiles have been placed, the Cave player can then start the Collapse by removing tiles. If the Cave player manages to remove all the Cave tiles, they win.

Gamers who have ever cooked a complicated recipe will understand the concept of Vast. It’s an amazing system when it’s all put together. If any ingredient is left out, it can still be good, but it may feel like something is missing. The more ingredients that are left out, the worse and worse the dish becomes.

The negatives on Vast operate from one prospect, and that is the difficulty of putting together a game with five sides which play in five different ways on a board which operates differently based on which side is considered. This necessitates five rules explanations and dependencies that are hard to leave out. Ultimately, if any side of the game is not present, the experience lessens.

Take the above to the extreme with only two players, and readers will anticipate what happens next. Vast becomes flavorless. The attempt at a great soup is visible, but without each side adding their challenges to the other, it feels empty. When players sit down and choose a mix of sides, understanding the game beforehand is overwhelmingly necessary. Otherwise, play will merely have the goal of learning how the sides function and depend on each other.

Now, taken to the other extreme, Vast at four and five player counts is unrivaled in interaction. Each side in the game feels like a seamless expression of the overall picture. Each player feels important and a challenge for others. It’s not deep, but there is definitely strategy. This is the real experience that Vast promises.

Finally, there’s one element that should also be considered. Vast’s sides also offer different personalities of gaming. If a person is the type to not enjoy directly attacking other players, some roles are better suited. If a person prefers to feel like their actions affect many others, another role might be best. Figuring this out and which roles suit which gamer personalities is part of the whole operation. It’s enjoyable, but a necessary trial for new game owners.

Included in this review copy were the full plastic miniatures for Vast. Overall these are exceptional and a joy to play with. They give a comic and three dimensional representation of play that elevates the experience. Gamers looking for the best component experience should strongly consider getting the Vast miniatures.

Vast: The Crystal Caverns can be a tremendous game experience, or a shallow and mostly flat one. Much of this depends on which sides are in the game and how many players are involved. However, when teaching the game, Vast is a difficult project requiring players who can cover the rules for all sides and a group with patience enough to listen through it. In the end, if all these fragile elements align, Vast is exceptional.

Final Score: 3.5 stars – With a committed group and patience to learn the rules, Vast delivers, and it delivers in spades. Even then, it’s best played with three or more players only.

Misses:
• Rules explanation for all new players is long
• Weak play with 2 players
• Various sides in play are better with certain personalities