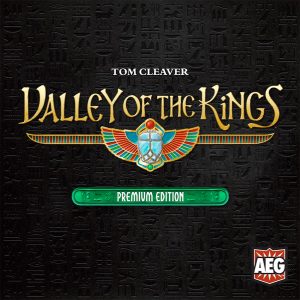 The bright, white room was barren except for a table. On the table sat a copy of Valley of the Kings: Premium Edition and what could only be described as a book.

“Here, review this,” began the manifesto. “I, Andrew, grow weary of this post. The inane games. The recycled mechanics. The dice. The asymmetry. I relinquish this post in order to pursue a more worthy challenge: restoring the sanctity of this industry. To start, I have documented 182 changes that need to be executed. #1: No dice. Dice are-”

I dropped the 63-page manifesto to the ground and went home to play the game.

Valley of the Kings: Premium Edition is a deckbuilding game in which you are an Egyptian pharaoh trying to accumulate the most lavish goods for your final resting place, your tomb. The Premium Edition consists of the three previously released versions of Valley of the Kings, as well as new pharaoh cards that grant players a unique ability, six new never-seen-before cards, and other improvements.

The game is played over a variable number of turns. A turn is made up of four steps in the following order:

The game ends when the following three conditions are met:

The player with the most points in his tomb at the end of the game is victorious.

My review will be divided into two parts: my game experience and a discussion of the premium components for gamers that already own the original game(s).

Similar to other deckbuilding games, a card can be played for either its action or for its gold value to buy cards from the pyramid. The pyramid is the marketplace where players can buy cards and is constructed with one card at the top, two in the middle, and three at the base. Note that only the cards at the base can be purchased. While you can buy as many cards as you can afford, cards are purchased one at a time and no change is provided if you have to overpay.

After purchasing a card, the pyramid “crumbles.” The card above it moves down to refill the open spot. I truly enjoy this mechanism, as you can manipulate the timing of when cards are available in the market. It also lets you see what cards might be available in future turns. However, if no cards are bought during a player’s turn, that player discards one card from the base to the boneyard at the end of their turn, ensuring the game is constantly moving forward.

The boneyard consists of cards discarded from the pyramid, as discussed above, or when sacrificed. Some card actions allow you to sacrifice cards from either your hand or the pyramid to the top of the boneyard while other cards allow you to take cards from the boneyard. What makes this interesting from a strategic perspective is that only the top card is available to take (you cannot search through the entire pile). See a card that you do not need but that your opponent does? Bury it by sacrificing one of your cards. See a card you can use? You better get it before it gets buried!

The final mechanism I want to discuss is entombing. Once per turn you can entomb one card from your hand to your tomb (there are cards that have entomb actions, these do NOT count towards your once per turn limit). ONLY the cards in your tomb score at the end of the game. Entombing presents the most interesting decision point in the game: when to entomb a card versus keeping it for its gold value/action. The speed of the game will impact this as you want to keep powerful cards; however, when the stock is low and the game is concluding, if you waited too long to entomb, you will find yourself behind your opponents.

I liked most of the premium upgrades. I really liked the bigger, tarot sized cards. The card layout is improved and easier to read; however, they are not as travel-friendly as the original. Most of the card art is the same as the original, with only the simpler art being altered. In addition, card sleeves are included in the game. I really appreciated this addition.

The game includes a player guide with explanations of every card as well as ways to combine sets across versions, greatly increasing replay value. It also includes a start player marker, not included in the original games.

It also includes six new unique cards that can be swapped in place of another unique set. We liked these new cards; unfortunately, we did not enjoy the new Pharaoh cards. These cards provide a unique round bonus for its owner. I do not feel that these powers are balanced. For example, one Pharaoh allows you to entomb a starter card each turn. This is great until your starter cards are all entombed. Meanwhile, another pharaoh allows you to draw 6 cards every round and discard one.

I love Valley of the Kings! It is one of my favorite deckbuilding games! Entombing is my favorite deckbuilding mechanism. It drives such a difficult decision point—when do I give up a card to make sure I score enough to win but that I have not hampered my engine too early in the game? I love the use of the pyramid as a market that can be manipulated. Valley of the Kings also plays fast and is enjoyable with two to four players (3 is still the best). I highly recommend this game is you enjoy deckbuilding games!

Final Score: 4.5 Stars – One of my favorite deck building games gets an upgrade with a premium edition.

Hits:
• The entombing mechanism is brilliant
• The pyramid is a great player influenced marketplace
• Easy to teach, plays fast but has difficult decisions
• Significant replay value by combining sets across versions

Misses:
• New Pharaoh cards are disappointing
• While I love the tarot sized cards, this version is less travel friendly