We review the Traveller Collectible Card Game, published by Horizon Games. The Traveller CCG pits players against each other to complete contracts and keep their ship running. 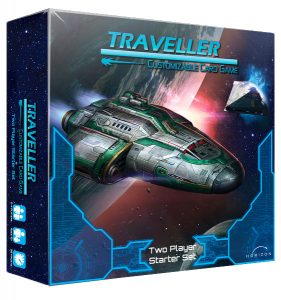 The universe is not unlike an open sea. Vast empty stretches of space pocketed by islands of gas, rock, and plasma. It’s enchanting to imagine that out there are civilizations, cultures, and discoveries that lie beyond the imaginations of even science fiction authors.

But where some writers see the lure of future discoveries to advance the morality of mankind, others seek the cause of pure profit. Undoubtedly, just like the opening of any new market, the future of space exploration and travel will also be the playground of those seeking to make some new money. As humanity advances out into space, this vision will resemble the role players take in this review’s subject: the Traveller Customizable Card Game.

The first iteration of Traveller was a roleplaying game contemporary to the publication of Dungeons & Dragons. Players imagined themselves as future-swashbucklers with a buck to make and friends to betray. Many like to think of D&D as the godfather of fantasy RPGs. If that’s true, then Traveller is undoubtedly the home planet of science fiction roleplaying.

The card game doesn’t stray from that formula. With only a single ship and a player-constructed deck of “Captain’s Cards” players are out to have adventures and earn some victory points. It’s a 1-4 player game that takes roughly 30 minutes for two players but easily an hour (depending on players’ game management skills) for four.

Players familiar with customizable card games will grasp the structure of the game quickly. It’s a 60 card constructed main deck and a 20 card “Adventure” deck. Players will select a single ship card to represent their vessel. Meanwhile, the main deck is intended to provide the primary game cards while the Adventure deck presents Contracts and Complications that will get in the way of players. 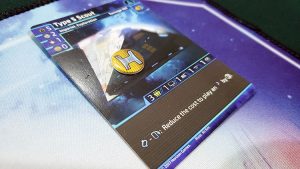 The main concept for card play is that each primary deck card has a money cost and a money value with which to pay for other cards. If a player wishes to play a card with a cost of 4, they must discard other cards in hand with a money value (a separate number) totaling 4 or more. Since a single game does not allow players to recycle their deck, any discarded cards will have a difficult time coming back to play.

Players will move through these phases, round by round, until one of the following things happens: a player acquires 20 victory points or all players but one are bankrupt (when a player must pay for a cost, such as an attack, but can’t from their cards in hand).

First, fan-lads and fan-lasses from the original Traveller will be pleased to know that Horizon Games has nailed the theme and mood of Traveller dead on. In order to capture the nature of adventuring in outer space, players need a certain bit of freedom. The experience of playing Traveller is exactly what players might expect from Xia: Legends of a Drift System as a card game. This will be right up many gamers’ space lanes.

The second item to keep in mind when considering the Traveller Customizable Card Game is that this is not a beginner’s customizable card game. Learning from someone with experience with customizable games with deck construction is recommended. The ins and outs of card combinations are at the heart of the experience and moving beyond the static preconstructed decks in the starter pack will need a certain skill set.

Once the above two items are understood, would-be buyers are assuredly going to wonder if the game is any good. Well, yes, maybe yes, and no. The game does offer a highly strategic and tactical experience with card play decisions, a mind-melting list of options for deck construction, and lots of moments where players are competing against each other to complete contracts. However, there are also a lot of painful analysis moments and a deep, deep economic challenge in the cards. This, in the end, may be exactly what players want from an expert level card game, but it also keeps the core theme of swashbuckling at a distance, especially to new players enchanted with the theme.

This is where the Traveller Customizable Card Game sets itself apart from more popular CCGs like Magic: The Gathering. It’s not a in-your-face slugfest. It’s an economic, throw a pebble in my opponent’s shoe, whittle away at the edges kind of conflict…with numbers… and icons…LOTS AND LOTS of icons. That may be the flavor players are looking for in an advanced card game, but for this reviewer, it led to exhaustion. The sheer accomplishment of learning the game’s mechanisms was such a feat that going further and really enjoying the economics beyond the cards strained most players’ interests.

Traveller is a very good game. It has the depth expected from a 2010’s customizable card game with oodles of theme, but there are moments when it feels like playing dueling spreadsheets with your opponent rather than a swashbuckling adventure on the gravity seas of legendry. Traveller is an expert level customizable card game that seeks serious players. Gamers looking for that with the storied source material will be well rewarded.

Final Score: 3.5 Stars – For those unphased by heavy combo-building, advanced play, and a sea of iconography as far and wide as space itself, the Traveller Customizable Card Game will deliver a deep holds of treasure.