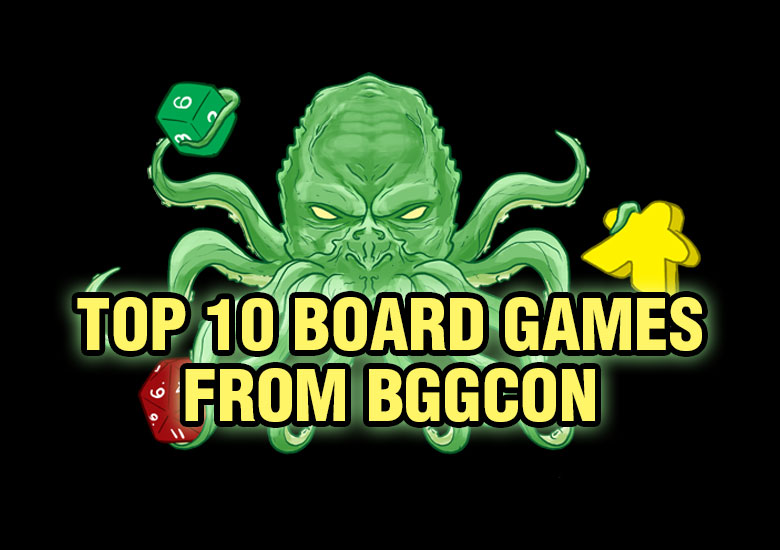 This past week I attended my first ever BGG.Con in Dallas, TX. Most of my convention experiences have been at Origins and Gen Con and while there is plenty of gaming there, it just pales in comparison to BGG.Con. In the 5 days of the convention, I managed to log 45 plays. The fine folks at BoardGameGeek provide a library of games including multiple copies of the newest hot titles from Essen, hard to find games that have been long out of print, and pretty much everything in between. It’s really very difficult to not be able to find a game there you want to play.

So today I’m sharing with you my Top 10 games the I played for the first time at the convention. Normally I try to include games on Top 10 lists that are relatively easy to acquire. This list will break that rule pretty dramatically. But that is the draw to the convention—its vast library makes it possible to play games you would likely otherwise never get to play. On to the games…

Originally released as Wabash Cannonball as a winsome train game, Chicago Express has been reprinted by Queen Games and is easily available but has somehow heretofore missed my radar. It has a stock and train system that is reminiscent of 18XX games, but ratchets down the complexity into a 45 minute package. Each turn you only have three possible actions—auction a new share of a company, place new train routes, or improve a tile to increase the value of companies that run through that tile.

When Grand Austria Hotel was first released, I mostly avoided it based on comments about its large downtime. And that is likely a real problem in a 4 player game as actions are taken in a snake draft order, so the player who picks first will have to wait for six actions to be performed before they can do anything again. But my two player game really hummed along and had a lot of interesting decisions in a beautifully produced package. I’ll definitely be looking to pick this up for nights when I’m gaming with a small group.

Turn the Tide is a small card game somewhat akin to a trick taking game, but not quite. Each round 2 scoring cards will be revealed and players will play a card from their hand simultaneously. The player who plays the highest card gets the lower of the two water cards. The highest goes to whoever played the second-highest card from their hand. Then the player with the highest scoring card loses one of their life preservers. After the whole hand is played out, you pass the entire hand to your left and do it all over again, so everyone will play with every hand throughout the game. You can’t blame the luck of the draw in this one. Not easily available in the US, but a cheap import from Germany!

So I first had Gnomopolis described to me as a game where you have Gnomes and they ride armadillos. I mean… what else do you need to know? But in reality, the cuteness is only secondary to really engaging gameplay. It’s a “bag-builder” in the vein of Orleans. You draw gnomes from a cup and can use them, depending on color, for various actions or to build new buildings. Each building you create adds new gnomes to your new city and also gives you scoring at the end of the game if you have the correct gnomes to fulfill it’s requirements. Published by Brazilian publisher Conclave Editora, I’m unsure if it will get wider release but it’s a great family weight+ game.

Finca has recently been reprinted after a successful KS launch after years of being out of print. On the surface, it’s a really simple collect resources and fulfill contracts type of game. Gathering resources done by a windmill-styled rondel where you farmer moves the number of spaces clockwise equal to the number of farmers already there and collects a number of fruit based on the number of farmers where he lands. The biggest catch is if you try to collect, say, 6 oranges and there are only 5 in the supply, all of the oranges from all players are returned and then you collect yours. Welcome to the cutthroat world of fruit farms.

Funagain’s booth in the BGG.Con exhibit hall was selling plenty of interesting imported games and Essen releases. I personally facilitated the purchase of four copies of Dice Fishing: Roll and Catch. It’s a simple game where players—get this—roll dice to try to catch a fish. Each fish has a requirement of the total value you must exceed and some require other special conditions. For instance you may need to exceed a value of 11 but that needs to include two dice with a result of 4. Players secretly bid behind a screen and the player that bids the fewest dice gets the first shot at it. There are also a special d10 and d20 fishing pole you can use as part of your bid.

This is pretty cult of the very very new, but I had a chance to play the new Fabio Lopiano game Ragusa that is launching on Kickstarter soon. It is a successor to Calimala where players can activate actions that will potentially allow their opponents to take actions as well. There are two new factors at play in Ragusa; first, you must have access to resources first from placing your buildings out in the countryside. Each action placement happens in a hex-gridded city that will activate three different actions. After the first play I immediately wanted to play again and I’m excited to see the finished product after Kickstarter.

Cupcake Empire grabbed me with the theme (because who doesn’t love cupcakes) and made me a believer with interesting gameplay. Players build their cupcake retail stands and bakeries while managing to create new cupcake recipes and deliver to customers whose sweet-eating preference match one of the cupcakes they have developed. You track both sales and production through the actions you take, but must do so in a balanced way as you will score the lowest of those values each round. Although the actions you can take and the power of them is determined somewhat by dice rolls you have plenty of options to mitigate a terrible roll.

Hab and Gut is a stock manipulation game where players will share hands with their opponents on either side of them. Each round you can buy or sell stocks and then you will play one card from each of your shared hands. One of the cards you play at full strength but the other you play at half strength, i.e. only going down 3 with a -6 card. It’s a game of insider trading and reading your opponent. It’s been reprinted with some major tweaks as Divinity Derby in the US, but there are other language versions somewhat available if you can track them down and the game itself is language independent. 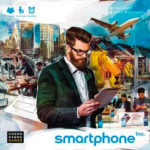 In Smartphone, Inc. players run cell phone manufacturing companies and attempt to maximize profits over 5 rounds. The main mechanism of the game involves arranging icons on the two player boards you have so that you can take certain actions. Each board shows up to 6 actions, but they must overlap by at least 1 square and as many as 4. The more you overlap, the more phones you potentially produce, but the less time you’ll be spending developing new technologies and moving into new markets to expand your sales.

You also have to compete on price with other players. This game had a small Essen release from a Russian publisher but will hopefully get a wider distribution. It has a feeling of a 60-90 minute version of Food Chain Magnate as players have to react quickly to other companies changing their prices and technologies.