We review Tokyo Washi Cops, an abstract strategy game published by Jordan Draper Games. Tokyo Washi cops is literally played on a roll of Washi tape and is quite clever for what it is. 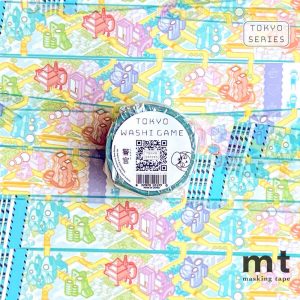 For the crafters among us, some of you may already be familiar with washi tape. For those that aren’t, it’s a Japanese tape that is made of paper, from shrubs and bushes. Often highly decorated or brightly colored, it is used for labeling, scrapbooking, or decorating in a variety of ways.

Leave it to none other than Jordan Draper Games to find a way to make a game out of it. Tokyo Washi Game Cops is legitimately just a roll of tape. Stick it anywhere and it becomes a game you can play with your friends. Peel it off when you are done or just leave it there as a decoration (or maybe you needed to tape something up and just played a game while you were at it?)

The washi tape roll is divided into segments and to start the game you’ll need to rip off a segment for each player in the game. Each individual segment has two zones, each with four locations. Each location has three areas that can be filled in. During setup, you’ll choose one location on your segment and fill in the largest area there.

Your goal is to fill in a largest, middle, and smallest area in the same zone. If you do so, you’ve solved the crime that took place there (you are cops, after all). If a player solves two crimes you win the game.

You’ll have a couple of special abilities to assist you. Twice during the game, you can eat ramen and either visit two consecutive locations or draw a new path between locations that doesn’t currently exist.

Tokyo Washi Game Cops is, ultimately, a pretty simple game. But it works well enough. It might be too simple for some, but we are talking about a roll of washi tape here. So obviously part of the power here is the novelty of it all.

Which isn’t to say the game is boring. The special powers do allow for some creativity. Especially adding new paths between locations. When doing so you can’t cross any existing paths but you can certainly add a path to set up a visit to a crime-solving location that maybe other players didn’t count on you being about to reach so quickly.

While the game is expandable to any number of players—given you have a large enough surface to stick the tape to—it really succeeds with a small group. Crowding more than three people around some strips of tape is uncomfortable, to say the least.

For the small price point (a roll will set you back about 10 bucks) you could certainly spend your money less wisely. It’s a pretty piece of tape to look at, for starters. You can cover a notebook with it and have a game to play wherever you might be. Or just keep a roll of tape in your drawer and show your gaming buddies that a game on a roll of tape is a thing that exists.

And, as a bonus, the game is pretty enjoyable. It’s abstract-ish and simple. But the powers are fun. It’s easy to teach, which is important for a game that is trading on novelty and cuteness as much as the gameplay itself. If someone walks by and sees you sticking tape everywhere and wonders what in the world is happening, you can easily explain and play with them in just a few minutes.

Final Score: 3.5 Stars – The washi tape is well-produced, looks great, and is both a novelty and a fun game to play.

Hits:
• It’s a game on washi tape.
• Stick it anywhere, play with anyone.

Misses:
• Tough to support more than a few players.
• Gameplay is pretty simple.