We review The Ruhr: A Story of Coal from Capstone Games. In this pick up and deliver game, players are trying to earn the most victory points by delivering coal in this new edition of Ruhrschifffahrt. 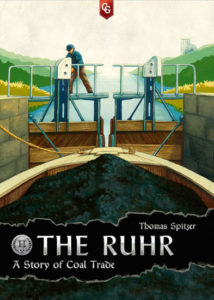 Ruhrschifffahrt 1769-1890 is the name of a game that is as difficult to pronounce as its rulebook is to learn the first time you read it. Designed by Thomas Spitzer in 2012, it is a widely celebrated pick-up-and-deliver game about the budding coal industry in the Essen region of Germany between (you guessed it) 1769 and 1890. Its rulebook, on the other hand, has the reputation as one of the worst English rulebook translations ever released.

For 2017, Thomas Spitzer and Capstone Games have released the game’s second edition as the second game in their Coal Trilogy (the first being Haspelknecht) under the new name The Ruhr: A Story of Coal. As a bonus, the team had also packaged it with a standalone expansion called The Ohio 1811-1861.

The Ruhr: A Story of Coal is a pick-up-and-deliver/worker placement game for 2-4 players that takes between 90 and 120 minutes to play. It plays best with 4 players.

[Note: There are two maps in The Ruhr: A Story of coal: The Ruhr and The Ohio River. For the purposes and the level of detail I’m getting into for this review, I will focus on The Ruhr map. There will be a quick recap of my feelings about The Ohio River standalone expansion later on.]

In The Ruhr, players operate coal barges on the Ruhr river in Germany between Essen and Port Ruhrort. At first glance, one of the most noticeable things about the game is the number of dice on the board. These dice represent the value of the coal available for pick-up (and thus delivery) at that respective location. Delivery of this coal can be to a city, industry, or Port Ruhrort which typically forces the player to cross an “obstacle”. By crossing these obstacles, the value of the transported coal is decreased by 1 upon delivery.

Throughout the game, players build loches and warehouses as a means of optimizing the pick-up of coal from depots and the delivery of said coal to locations along the river. The game takes place over twelve rounds, with each round being broken up into seven phases:

Let me start by saying that The Ruhr: A Story of Coal Trade is fantastic and that is in no small part due to the updated rulebook. Contrary to my lack of brevity in the Gameplay Overview above, The Ruhr rules are easy to reference making the gameplay relatively smooth. Keep in mind that this is a medium-heavy euro, so for the first few games it does require quite a bit of rulebook referencing, but it is not torturous. Try a side-by-side with the original rules and see if it would have hit your table before. Capstone Games and Thomas Spitzer have done amazing things with the rulebook, plain and simple.

The game is pretty simple to play: place workers to pick things up and then put them down. Obstacles along the way (pun intended) and random/fixed events that limit player options add loads of strategy and tactics to the game. However, the combination of the movement of the export marker and the location of the warehouses in Port Ruhrort adds an economic bent on top of things that forces players to examine not only how their actions affect their own play, but how it affects their opponents play.

It is easy to shoot yourself in the foot by oversimplifying an action, so the challenge and “if/then” mental play throughs of your opponents’ next turn can encourage analysis paralysis. I want to play against my opponents’ best version of the game, and the groups with which I usually play are relatively like-minded, but that may not be for everyone. Groups that are unfamiliar with games of this weight may not appreciate this type of gameplay.

As for The Ohio River standalone expansion that comes in the box, anyone who has played a Concordia expansion will be familiar with the relationship between The Ohio River and The Ruhr maps. There are about a half-dozen rule changes that smooth out some of the rougher edges of The Ruhr, but generally, the two have the same feel. Suffice it to say, that it offers replay value, but not any opinion changing advancements.

The Ruhr: A Story of Coal is easily one of my favorite games from 2017, but it is not a game I would recommend for everyone as its moving parts might be a little overwhelming to new players. At about medium heaviness, games become a mental vacation which permits me the luxury of focusing solely on the table and forgetting about all of my responsibilities beyond keeping my victory points up and my dice off of the floor. I would recommend The Ruhr to a group that likes to get lost in its game night and doesn’t mind the occasional A.P. from its players.

I don’t know if players of Ruhrschifffahrt should necessarily trade in their old copy (unless they want to play The Ohio), but to those that didn’t play the first edition (or simply shied away from its rulebook), I do recommend grabbing a playthrough or few of this version. All in all, The Ruhr: A Story of Coal is a much-improved rerelease of a great game.

Final Score: 4 Stars – Perfect game for those who like to pick things up and then put them down again.

Misses:
• Analysis Paralysis is a definite possibility here
• Some of the random events can drag out the game