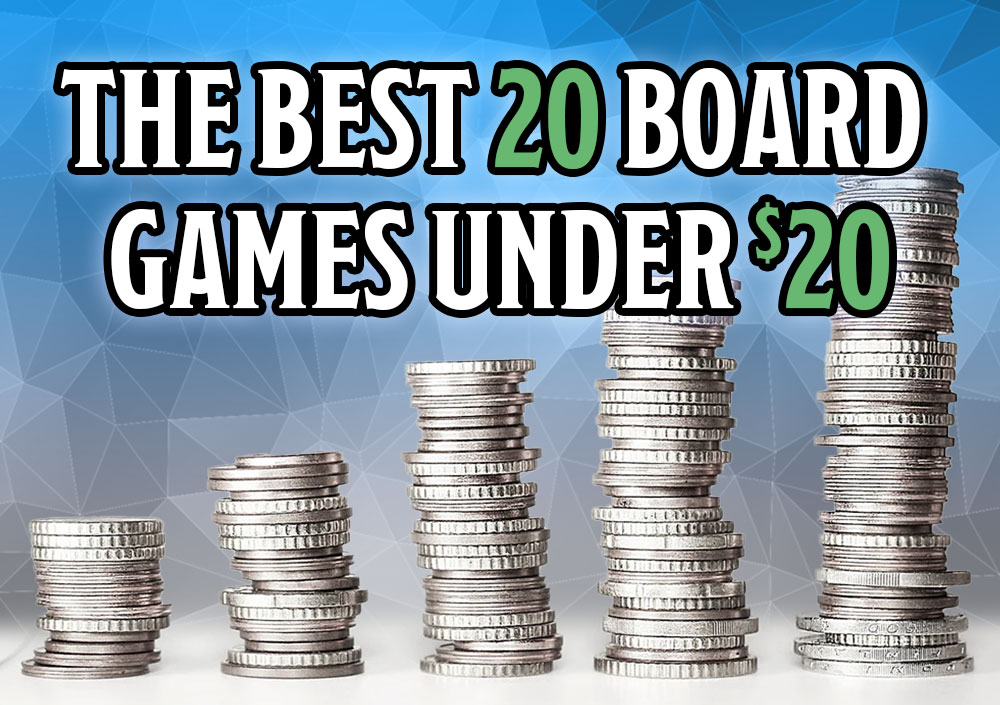 There is no question that games have gotten more grandiose since the rise of Kickstarter. Board games that used to hover around $50 now come with a price point of $100, sometimes even as high as $300 if you want the “all in”. And while many of those plastic-laden games are fantastic, they are also not the only way to have fun at your tabletop. There are actually a wealth of games that you can get for under $20.

And that’s what I’ve got for you today. In no particular order, here are my 20 favorite board games that you can get for under $20. And to keep things simple, I’m going with the current price on Amazon (which can fluctuate) at the time of this writing. So if you are looking for some gaming goodness without breaking the bank, I’ve got you covered.

Point salad is a board game term for a game that gives you a multitude of ways to earn points. And that’s exactly what Point Salad is in a nutshell. Players take turns drafting cards to be used in one of two ways. As ingredients for their salad, or as ways to make those ingredients score points. It’s an easy and quick playing game for anyone that loves set collection.

Letter Jam is a cooperative game where players are helping each other to compose words. The wrinkle is that the letters you control are facing outwards, so you’ll need assistance from other players and some deduction skills to figure out what you have. If you’ve played the game Hanabi before, imagine if that game had a baby with Scrabble and you’ve got Letter Jam. 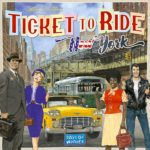 I’m sure you’ve heard of the massively popular game Ticket to Ride by now. It has sold millions of copies and spawned a number of offshoots. One of those offshoots is Ticket to Ride: New York, a version of Ticket to Ride that plays in about 15 minutes, which is about the perfect amount of playtime for Ticket to Ride in my opinion. It’s all the set collection and route claiming fun but in a more streamlined and portable package.

In Forbidden Island, players are working together to secure four artifacts from the board before the island sinks into the ocean. Each player gets a unique role and the game’s simple action system allows players to quickly take their turns. Plus if you enjoy Forbidden Island, there are two follow-up games: Forbidden Desert and Forbidden Sky! Can you rescue all the treasures and make it to the chopper in time to secure victory?

If you like to solve puzzles and visit escape rooms, then the Exit series is a great place to get your fix. Players are dropped into some kind of situation and must solve puzzles to escape/complete their mission. There have been a plethora of different versions of Exit already released, so you can pick and choose which theme sounds the most intriguing to you. While Exit does have a nice variety in its puzzles, many will have you destroying components, so this is definitely a one-and-done type of game.

I love me some drafting games even though they don’t always work at 2 players. But that’s where Tides of Madness comes in. This two-player-only game has players taking turns picking a card from their hand and passing the remainder to their opponent. The goal is to draft cards to complete sets and score points. However, the trick with Tides of Madness is that some cards also give you madness tokens. Get too many of those and you go insane and immediately lose!

Team3 is a take on the old “see no evil” 3 monkeys joke. Players are tasked with working together to build a structure but each person has a specific restriction. One player can see the project plan but can’t talk, the second can talk and must relay the instructions from the first to the third person who does the actual building. But that third person? They have to keep their eyes closed. It’s a really fun game that will definitely test the players’ abilities to work together.

8. The Crew: The Quest for Planet Nine (review)

In this cooperative trick-taking game, players are trying to accomplish specific objectives over the course of each round. The missions in The Crew get steadily harder (of which there are 50) forcing players to really strategize as the game progresses. Sound easy? Not so fast, what’s different is that players aren’t allowed to talk, forcing them to use their deductive abilities to figure out when is the best time to play each card.

Just One is a party game that tasks a player in figuring out what the secret word is. One player will be the active player while the rest must provide clues for the secret word. However, if any players provide duplicate clues, they are tossed out. So players must come up with clues that aren’t so obvious that they might be duplicated, but also not so obscure that they won’t help the active player.

7 Wonders has always been my first love of card drafting games, but sometimes I just don’t have enough time to play it. Enter Sushi Go! This game distills the 7 Wonders experience down to its core elements. Players will take turns drafting a card and passing the rest to the player on their left. The goal is to collect different sets of sushi to earn points over the course of three rounds.

One of my long-loved games, Port Royal is a hidden gem designed by Alexander Pfister (Great Western Trail, Maracaibo). It’s a simple press-your-luck card game that will have you drafting ships and using the coins you earn to recruit people. These people not only provide you victory points, but also a diverse range of abilities. Port Royal is easy to learn and quick to get to the table, yet the gameplay has enough meat to keep it entertaining for the long haul.

Air, Land, and Sea is a two-player card game has you and an opponent facing off to control the three theaters of war: air, land, and sea. Each turn you’ll play a card to one of those theaters, giving you control points or a special ability. The goal is to have the most points in two out of three theaters at the end of the round. You can also drop out of the round at any time if you think you are going to lose. The reason? The earlier you drop out, the fewer points your opponent scores that round! It’s a careful balancing act of knowing when to cut your losses.

Trick-taking games rarely work at two players, but game designer Joshua Buergel somehow made it happen. This two-player-only trick-taking game has players trying to collect a certain number of tricks each round. There are three suits of cards in Fox in the Forest, with all odd numbers cards also having a special ability. The important thing to know is that you want to win most of the tricks but not too many. If you get too greedy, you actually lose points!

Veteran game designer Bruno Cathala took the age-old game Dominoes and turned it into an accessible family game called Kingdomino. Players will take turns drafting tiles into their kingdom trying to match up terrain types while also collecting crown icons. The game is super simple to learn making it perfect as a family game or to play with your non-gamer friends.

HABA Game is known for their excellent range of family games, but occasionally they have a title that straddles the line and appeals to just about everyone. This is one of those games. Rhino Hero tasks players with building a tower of cards and also moving the rhino meeple higher and higher. This dexterity stacking game hits all the right marks of ease of play, cool components, and pure fun.

There are many versions of Codenames out there but this is easily my favorite. It takes the familiar guessing style gameplay of Codenames and turns it into a two-player cooperative game. In Codenames: Duet, you and your partner alternate giving clues to each other in the hopes of guessing all the secret words before time runs out. But you have to be careful, if your partner chooses the hidden assassin card, you both immediately lose!

Another small box game from Alexander Pfister makes the list! In Oh My Goods!, players are European artisans in the Middle Ages who are producing tools, windows, barrels, and other such items. Each of the multi-use cards can be used in one of three ways, as a good, as a building, or as a resource. The main goal for the players though is to make production chains that will score them victory points.

This beautiful-looking game combines set collection, tile-laying, and hand management. Each round players will be drawing cards and potentially adding some to their tableau of trees, creating paths in their arboretum. The trick in Arboretum is that when scoring comes, only the players with the highest value of cards of each tree type in their hand will score the matching cards in their tableau. So players must carefully balance playing cards with saving them to score.

Any easy to learn dexterity game that will have you flicking penguins around a school house. Ice Cool is one of those games that has to be experienced to really understand how awesome it is. Each round one player will be the catcher trying to tag the other players’ tokens while the rest are trying to collect enough fish before they are caught. The weighted penguin tokens work really well in the game, even allowing trick shots for those who are deft of hand.

Probably the smallest game on the list, Sprawlopolis is part of Button Shy’s “wallet” line of games. It uses only 18 cards and tasks players with creating a city to try and maximize their victory points. In each game, 3 of the 18 cards are set aside for scoring objectives, meaning just about every game you play will be a little bit different This gives Sprawlopolis a ton of replay value. While Sprawlopolis works well as a cooperative game, it’s best for those looking for a solo experience. 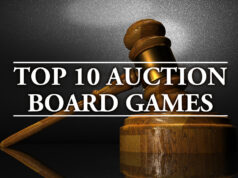 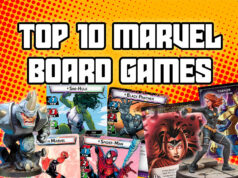 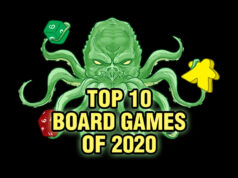