We review the easy to learn card drafting game Sushi Go! This accessible card game will appeal to just about anyone with its streamlined rules and family friendly theme. Check out our full review to see all the ups and downs of the game. 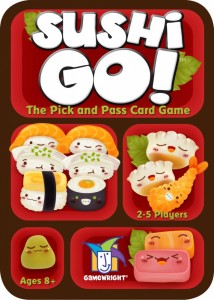 When it comes to card games, one of my absolute favorite mechanics is card drafting. I think it’s the feeling of anticipation when a new hand is passed to me each round. I don’t know exactly what cards will be in there, but I find myself always filled with hope that it will be one of the cards I need. It’s this kind of build up each round that helps keep the game exciting and fresh.

When it comes to card draft, 7 Wonders is the king of the castle. It was the first game to use that mechanic and is also probably the biggest name out there. Since then, a number of games have taken on this mechanic with their own spin (Among the Stars, Fairy Tale). Today, we are going to be looking at Sushi Go! This quick playing card game also has the distinction of probably being the lightest and most accessible game in this genre.

Sushi Go! is a card drafting and set collection game for 2-5 players that plays in about 15 minutes. Sushi Go! plays best with 4-5 players.

Sushi Go! is played over the course of 3 rounds. Each round, players are dealt out a number of cards to begin with. They simultaneously select one card and play it. Afterwards, the remaining cards in their hand are passed to a neighbor. The cards played will give players various amounts of points at the end of the round based on how well they did with their set collection. At the end of the 3rd round, the player with the most points is the winner.

Sushi Go! was originally published by Adventureland Games after a successful Indiegogo campaign. Recently, this causal game has been picked up by Gamewright and given a new look.

The artwork on the cards has been redone, but still keeps a quirky, almost comedic look that fits well with the game. The contents (cards and instructions) come in a portable metal tin that stores the cards well. If I had one complaint it’s that the card stock feels a little thin. I wish they would have gone with something a bit heavier as this game will probably be shuffled and handled quite a bit. Also, players who had the original addition will notice that the scoring cards have been removed in this edition. We just used a piece of paper and had no issues, but I figured it was worth mentioning.

To start the game, all the cards are shuffled and each player is dealt out a number of cards based on the amount of players. Once they have their starting hand, the game is ready to begin. Each turn, players simultaneously choose a card from their hand to play and then pass the rest of their card to the left (or right). There are a number of different cards in the game that have a variety of points or effects. All points are collected at the end of the round and then the cards are discarded (except for pudding cards). The different card types include:

Sushi Rolls: These come in denominations of 1-3 value. The player that has the most points of Sushi Rolls at the end of the round gains 6 points and the second most gains 3 points.

Tempura: A set of 2 Tempura is worth 5 points.

Sashimi: A set of 3 Sashimi is worth 10 points.

Dumplings: Dumplings are worth a number of points based on how many you collect. The more you have the more each are worth.

Nigri: There are 3 different types of Nigiri from 1 to 3 points. You gain that many points at the end of the round.

Wasabi: The wasabi card is worth nothing, but what it does do is triple the value of the next Nigiri card you play.

And that’s all there is too it. At the end of 3 rounds, the player who has the most points wins.

Sushi Go! is definitely the lightest drafting game I’ve ever played. I’m used to playing 7 Wonders where I need to not only figure out which card I want to play each round, but also figure out if I can afford it. All that bookkeeping goes out the window with Sushi Go! Game designer Phil Walker-Harding did a great job of figuring out the essence of a card drafting game and distilling it down to that. As the box says, it’s really just “Pick and Pass”.

That’s also what I think makes Sushi Go! so accessible. Once you explain how the point scoring works, any player should be able to jump right in. One of the hardest parts about teaching 7 Wonders was explaining how resources work (and the science symbols). With Sushi Go! you just tell people how to score points and when to pass, they’ll get it. I do wish that Gamewright had included cheat sheets for the players as it can be hard for new players to remember what all the cards are. Fortunately, the cards do say what they score on them and game plays quick enough that you can easily just play again after a learning game.

Speaking of the rules, one of my favorite additions was the chopsticks card. I have not seen something like this in a drafting game before and it’s a really clever idea. It’s almost as if I’m reserving a spot in my play area for a future card I want, which is also a gamble. There have been a few times when I’ve been stuck with the chopsticks at the end of the round as I kept hoping for a better card to use them on, only to have it never show up.

Another interesting thing about the rules is that you play ever card. Most drafting games have you choose from the last 2 cards, but in Sushi Go! whatever gets passed you, you play. As there are no bad cards, this really isn’t a bad thing. However, a sneaky player will use their chopsticks card on the second to last round, making sure you get passed a useless card when the chopsticks come you. Small strategic choices like that are really fun; however there aren’t too many moments like that in Sushi Go!

While it’s accessible nature is where Sushi Go! really shines, I do think it is probably a bit too light for many experienced gamers. One of the quirks of Sushi Go! is that there is not really any good way to deny cards to your opponents, which is one of the hallmarks of card drafting games. In 7 Wonders you can sell cards or bury them under your wonder. In Fairy Tale you can just discard the 2 cards you don’t want an opponent to have. In Sushi Go!, the only way to deny your opponent a card is to play it yourself. In one game, I had an opponent with 2 Sashimi cards in play. I knew I had the last one in my hand but hadn’t played any Sashimi cards that round. So my options were to play a card that would let me zero points or pass it to my opponent who would gain 10, but would allow me to play a card to benefit myself.

This does make for some hard decisions in the game, but also some frustrating ones. Many times I want to be able to block my opponent from getting a card, but don’t want to have to sacrifice my position in the game to do so. This is where Sushi Go! sacrifices strategic game play for accessibility. I think this is also the reason that Sushi Go! makes a fantastic gateway game. While I do think Sushi Go! is fun, I don’t think it will be replacing the heavier drafting games for the more experienced gamer. But for something to play with your kids or your parents, it makes a fantastic choice. .

In the end of the day, I think Sushi Go! sets out to do what it was trying to do. Create an accessible card drafting game (or Pick and Pass as they call it) that will appeal to gamers and non-gamers alike. I can easily see playing Sushi Go! with my parents when they come to visit or some of my non-gamer friends. The game has just the right mix of accessibility and length that just about anyone can jump right in. I think Sushi Go! can even work with those who have young kids at home. The rules are easy and the theme is very family friendly.

For the hard core gamers in my group, Sushi Go! will probably be nothing more than a random filler game or an appetizer to open up a game night. Still, if you are looking for a casual, yet fun card game than Sushi Go! is worth a look. The game can be played in about 15 minutes and its fun theme and quick rules make it easy to get to the table for just about anyone.

If you are interested in getting a copy for yourself, it’s about $12.

Final Score: 3.5 Stars – A very accessible game that will appeal to a diverse group of people; however it might be too casual for experienced gamers.