We review The Crew: Quest from Planet Nine, published by Kosmos. In The Crew, players are working together to complete an ever-increasing series of tasks through the use of trick-taking mechanics. 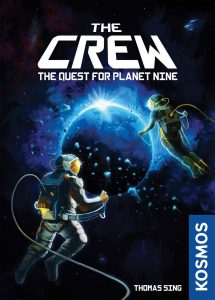 Let me guess, you are here because you found out that The Crew won an award or something (the Kennerspiel des Jahres award for those playing at home) and now you’re trying to decide whether you should buy it or not? Well thank you for including us in your purchase decision-making process. Spoiler alert: yes you should. But why? Read on.

The Crew: The Quest for Planet Nine designed by Thomas Sing and published by Kosmos, plays 3-5 players in about 20 minutes.

The Crew is a unique trick-taking game. Each mission (or round), players face a moving target for winning. While many trick-taking games have an almost wash-rinse-repeat flow to them, for the Crew, this isn’t the case.

The Crew employs standard trick-taking mechanics, such as suits and rules of play (leader plays a suit and all must follow with the same, trump suits beating all, etc…). But it adds some interesting elements that make for tense and satisfying games: cooperation and tasks.

Cooperation may be familiar for some. If you’ve played Fox in the Forest: Duet or even any other team-based trick taker, like Euchre or Gorus Maximus, you should have a general idea. The difference here, though, is the opponent is the game and what it requires of players each mission changes (we’ll talk about how tasks do this in a second).

As is true in team-based trick-taking, table talk is a no-no and the same is true here to a degree. Although you can’t blatantly tell others “hey I have that card”, all players are given communication tokens, which they’ll each be able to use once a round. This is done by revealing a card, using the communication token to indicate whether that card is their highest, lowest, or only card of a suit. You’ll still be able to use this card as the round goes on, but now everyone has additional information to help steer things to victory.

The second item The Crew brings to the table that really sets it apart from other trick-taking games is tasks. Tasks are cards revealed at the beginning of a mission, identical cards to those within the main deck. Going around, players will take these tasks. Whichever tasks players received will be the cards they have to win in order for everyone to complete the round.

The game includes 50 different missions that gradually become more complex. It’s recommended to play from start to finish because of this ramping up, but I think folks who’ve played a lot of trick-taking games could see how harder missions strike their fancy. Earlier missions will ease players in, requiring one player to win one specific trick, but later rounds greatly complicate things by controlling communication between players and the order in which tricks can be won.

As you may or may not know, The Crew recently won the Kennerspiel des Jahres. While I think an award can help point people in the direction of solid games to check out for themselves, it’s worth knowing why it’s good and if it’s a good fit for you.

First off, yes, this game is solid and very fun. It’s dynamic and each game, regardless of the mission or players, will feel new. I am a huge fan of trick-taking games, so I had to check this out to see if it lived up to the hype. If you are drawn to trick-taking games, you owe it to yourself to try this out. I never felt like a turn was boring. I was always engaged, watching what others were playing and seeing what I could play that would hopefully help my team.

I just loved each mission we got through, figuring out how to help others or myself based on our communication and what was played. Even when we failed, it didn’t feel like a chore to try a mission over. I had to refocus and reassess each mission and that really kept me involved the whole time.

The Crew plays three to five players, with a two-player variant included. As has mostly been true to my other trick-taking experiences, three to four is the sweet spot. Two is playable but not ideal and even says so in the rulebook. Also spelled out in the rulebook, playing with five will bring added challenges and difficulty, especially in later missions that add in special rules.

A few other quick things worth mentioning: each suit includes a distinctive shape to be more color-blind friendly. This sort of inclusiveness is something I wish all game publishers considered in their games. The card quality is also sturdy with a linen finish, so I believe it’ll hold up to the many plays. I’d heard the previous German publication didn’t have as nice of cards, but these are solid so no worries here. Lastly, there is a story that accompanies each mission in the rule book. It’s really the only thing that provides a theme to this game, but honestly, it’s easy to ignore it. Even if this game had no theme at all, it would still be just as enjoyable.

If you enjoy trick-taking games, The Crew is one you can’t pass up trying out. I think what you get with this game that sets it apart from any other trick-taking game I have played is near-infinite replay value and varying complexity. That alone makes the under-$20 game a no-brainer. With engaging missions and cooperative play that keep your brain working, The Crew one that will remain high on the list for fans of trick-taking games.

Final Score: 5 Stars – A trick-taking game that’s, shall we say, “out of this world”

Hits:
• No two games will be the same with different tasks that change the play experience
• Highly engaging and complex in a way missing from most trick-taking games
• Under $20 offers great value-gameplay ratio

Misses:
• Two-player variant is not ideal