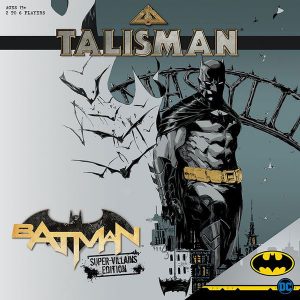 Talisman, first published in 1983, is one of the most prominent adventure board games that now has multiple editions and dozens of expansions. Last year, the fantasy-themed game of wizards, dwarves, and dragons got a couple of makeovers using popular intellectual properties.

Today we are looking at Talisman as it moves into Arkham Asylum and puts players in the role of a prominent villain in the Batman universe as they try to defeat the caped crusader and release all of the convicts from Arkham. This was my first experience with Talisman in any form, so let’s dig in and see how it went!

In Talisman: Batman you’ll spend your time moving around Arkham Asylum trying to find weapons, followers, and other items. These generally give you more power and better abilities, allowing you to ascend to higher levels of the asylum and eventually get to the top of the tower and defeat Batman to win the game.

During setup, you’ll be given two villain cards to choose from and you’ll take the matching miniature. The art on these character boards is straight from the “New 52” comics and really brings the world to life. The miniatures aren’t the most detailed, but get the job done.

From there, it just kind of… happens. You roll a die and you can move either clockwise or counter-clockwise that number of spaces. You’ll resolve whatever happens in that particular room, which almost always means drawing some number of random encounter cards. These may be enemies to fight, items you can take with you, or followers to tag along with you on your journey. If another player happens to be in the same spot, you can instead attack them. If you are successful, you can damage them or steal items they’ve found.

As you get more items and experience from defeating enemies you’ll be more powerful. You can move to the second level of Arkham and eventually start climbing the tower to the security room. Each level has its own unique deck of encounter cards available. If you have the key card to enter you’ll battle Batman and, if you defeat him, disable the security system and set the criminal world loose on Gotham.

Talisman: Batman is not my usual type of game I enjoy. It’s not strategic. There are next to no decisions to make. It’s an experience that happens to you. That said—I didn’t hate it. In fact, I really even kind of had fun. That isn’t to say everything was perfect, but it was at least entertaining. But I don’t expect it to entertain anyone more than once or twice.

For starters, the various rooms and encounters can be pretty fun. In some ways, they remind me of things that happen in Betrayal at House on the Hill. When you visit the kitchen, for instance, you’ll roll a die and then deal with the outcome. Maybe a guard will sneak you to the 2nd level of Arkham. Or a fight will break out with the cook. Or you’ll grab some tainted food and pass out for a turn.

The encounters can let you team up with other villains of the Batman universe which gives you additional abilities. Hush will increase your “cunning” skill. Man-Bat lets you skip potentially taking damage in dangerous rooms. And you’ll need their help as you may run into Robin or Batgirl and have to fight them as you wander aimlessly through the rooms of Arkham.

All of this helps Talisman: Batman feel like it tells a story. Which is let down a bit by how little is in the player’s control. The main mechanism is literally roll and move. You roll the die and you move that many spaces. You basically have a choice of two different rooms to land on and that’s that. And the encounter decks, especially for the third level, are outrageously thin. You’ll see every card in it every game. And then reshuffle it. Multiple times. The mystery of what is going to come up just is completely gone by your second play.

The game also can just drag on a bit too long. It’s entirely within the player’s control on when they progress but if they roll poorly (or are too timid to risk advancing) it can bog things down. If the whole game can be completed in an hour, as the box suggests, it would be a very fun experience more often than not. Unfortunately, it seems to bleed closer to 2 hours much too often. It even boasts up to 6 players which seems like an experience I would never wish on my worst enemy as there is nothing for players to do on others’ turns and the encounter decks would be exhausted in the blink of an eye.

Also worth noting—the rulebook is atrocious. There are plenty of things that just aren’t addressed at all in the rulebook. Can you go down a level if you want to? Some encounter cards say “if your cunning allows…” is there a requirement or is that flavor? You can turn in defeated enemies to upgrade your villain, but it doesn’t say which number of the card represents their “value” for that upgrade.

When Talisman: Batman gets a chance to spin up a narrative and give the player’s a story to experience in Arkham, backed up with great comic art, it can really shine.

Unfortunately, it can drag on too long at times and I wouldn’t often want to experience it with more than 3-4 players. The encounter decks are far, far too small and it really is detrimental to the game as a whole. Maybe there is room here for more expansions to flesh it out a bit, but as it currently sits you’ll see the same minor characters basically every game. While the rooms themselves can have fun narrative outcomes they are obviously static—the board doesn’t change—it would have been nice to have more variety in encounters.

If you love Talisman or Batman you could certainly do worse. The fact that I enjoyed, even a little, a thematic roll and move game is a small miracle. But it’s hard to recommend Talisman: Batman widely based on the length, lack of variety, and terrible rulebook.

Misses:
• Too few encounter cards, especially are higher levels
• Rulebook is the worst I’ve seen in years
• Best when it all finished in about an hour.