I’m going to take a break from my usual board game reviews to talk about Tabletop. If you are not familiar with it, Tabletop is a webseries hosted by Wil Wheaton (Star Trek, Toy Soldiers, The Big Bang Theory). Each episode, he reviews and plays a board game with a variety of different people. I’ve never actually seen a full episode of Tabletop, so this will be my first time actually watching a full show.

For their eleventh episode. Wil Wheaton played the board game Elder Sign 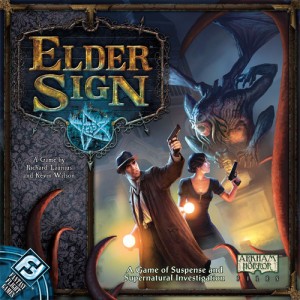 is a coop board game set in the Arkham Horror universe. Players take on the role of investigators trying to defeat one of the ancient gods before they can wake up and devour the world. I’ll avoid giving you the full run down of how to play like usual because:

The webshow is about 34 minutes long and it takes you through their full playing of the game. Now, normally, I’d say watching a group of people play a board game would be about as much fun as sitting in traffic, but the brains behind Tabletop do some interesting things to keep you engaged over the half hour of the show. Some of the notable things I enjoyed were:

So that’s my thoughts on the very first full episode of Tabletop I’ve seen. I’ve heard of the show in the past and enjoyed bits of it, but never sat down and watched a full 30 minute episode. I’m glad I did though. It was a lot more interesting then I expected and I think they’ve got something good going here. I’m looking forward to when they play a game I don’t own just to see how it’s different from a viewer’s perspective. Not an easy task when I own over 200 board games.

So give it a watch below and let me know what you think: