We review Shaky Manor, a dexterity board game published by Blue Orange Games. Shaky Manor, formally know as the KDJ nominated Panic Mansion, will have you shaking a box to try and get pieces into a specific room in the manor. 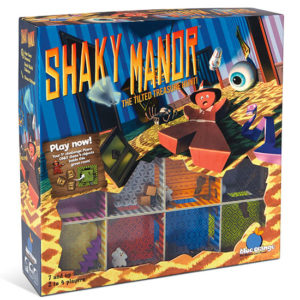 Next to card drafting games, one of my favorite genres has to be dexterity games. I think I love not only the skill involved, but how unique the game play is. Even ones that share mechanics can stand out on their own and providing a completely new and entertaining experience.

Shaky Manor (formally known as the KDJ nominated Panic Mansion) is a dexterity game that will have you shaking a board to try and move random pieces around. Sounds easy enough right? Let’s find out.

Probably one of the most unnecessary rules overviews ever, because you can literally walking into a game store and pick up any copy of Shaky Manor to try it without even opening the box! Publisher Blue Orange Games smartly made a windowed box with a demo right under the cover. But for those shopping online, there are essentially three ways to play Shaky Manor.

The basic game will have players racing to be the first to get the adventurer into a specific colored room with the three treasure chests. They must do this while also keeping the ghost out of that room. First to do that earns a point.

The second way to play has players flipping over a card, and then they must try and get all the pieces pictured into a specific colored room.The final way to play is the opposite, where everything but what’s on the card must be in the room.

In all cases, players are racing each other to be the first to accomplish the task. They do this by shaking the box, trying to move the pieces through little doorways.

Blue Orange Games has been doing a nice job with their speed dexterity line of games and Shaky Manor falls right into that group. As you can tell, the rules explanation should take only seconds as the gameplay is rather intuitive.

When it comes to the gameplay, I think Shaky Manor is definitely going to mostly appeal to a younger crowd. While there is some skill involved here, Shaky Manor is very much a one trick pony and most adults will probably be ready to move on after a game or two. However most kids I tested the game with have enjoyed it quite a bit, with those on the younger side being most enthusiastic (under 8).

What helps the game is the great variety in pieces. There are standard meeples and cubes, but also really unique pieces like a wavy snake and a round eyeball. Those last two in particular can really cause you fits as the snake can easily get caught on a doorway, while the eyeballs seems to fly everywhere in the board.

Finally, I thought that it was really clever of Blue Orange Games to include a clear plastic overlay on the box cover, so people can pick up the game in a store and try it out. It somewhat reminds me of those old marble games I played forever ago, the ones where you tilt the board trying to get tiny marbles to fall into recessed circles.

Shaky Manor isn’t going to be for everyone. There just isn’t a ton of depth here and after a play or two you’ll have seen all it has to offer. While the gameplay is fairly unique, in our games, the younger kids where the ones that wanted to spend the most time with it. Most gamers enjoyed a game or two if Shaky Manor and were ready to move on.

That being said, the component quality is great and the game is very easy to learn. It does make for a nice filler game that can be played in just a few minutes. If you are at all curious about Shaky Manor, head over to your closest FLGS and try it out.

Final Score: 3 Stars – A unique dexterity game that, while fun, doesn’t really have a lot of staying power.

Hits:
• Easy to learn
• Solid components
• Can try before you buy

Misses:
• A one trick pony
• Not enough depth for adults