We review Scout!, a ladder-climbing game published by One More Game. In Scout!, players are trying to shed their hand of cards to earn points. Scout! is one of the most unique trick-taking games you'll ever see. 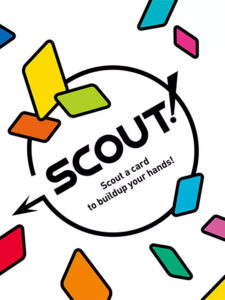 Living in the age we do, getting games from across the largest ocean in the world is no problem at all. Late in 2020, I placed an order with Amazon.jp for two Japan-only games (as of my writing this they are Japan only). The first is the dice-rolling, area majority game Rumble Nation, and the other is a small card game by the name of SCOUT! (which from here on out I will be leaving off the exclamation point).

I ordered SCOUT for many reasons. For starters, I have spent a lot of 2020 finding the right card games to play with my family. We grew up playing Euchre, so card games feel familiar to them. SCOUT is not a trick-taking game, but is a close cousin: ladder climbing. The other huge reason I picked up a copy is because of its simple, but genius design choices.

SCOUT has a very simple objective: be the first to run out of cards. You do this through playing cards in gradually stronger sets like in other ladder-climbing games (ex. Tichu, Haggis, Custom Heroes). There are some major catches to make SCOUT different. Cards are unique in that there are different numbers on the top and bottom of the card. When a hand is dealt out, you pick up the hand and cards may not be moved once that hand is picked up. The numbers on the bottom aren’t visible, but you can see what they are through a smaller number beneath the number on the top. At the beginning of a round, if you don’t like your hand, you may flip it, keeping the cards in the same order, but using the bottom part of the card instead.

On your turn, you can choose one of two actions. The first is playing cards, and the card(s) played must be stronger than the arrangement that is already on the table. If that is done, you may take the cards that you beat and put them face down in front of you for points. When playing more than one card, they must be adjacent in your hand.

This is where the second action comes into play: scouting. Instead of beating the cards on the table, one of the cards may be taken from that set (from one of the ends if there are three or more cards, meaning there is still a legal play) oriented for either number, and added anywhere in your hand. The player that had their card taken receives compensation of a point token. All players receive a single-use “Scout + Play” token, where they may do both actions on their turn.

Play continues until a player runs out of cards or all but one player has scouted consecutively, then the round is over. Cards that are face down in front of them (ones they beat) are worth a point, along with every token being a point as well. But for every card remaining in the hand is a negative point (unless you triggered the end game). The points are written down, and another round is dealt. Play the same number of rounds as the number of players and whoever has the most points wins.

SCOUT is so smart in its design, and for many reasons. If a player needs to scout instead of playing cards, they are setting up their hand for future turns, giving the player with the leading cards a point, and weakening that set for the next player. Scouting a card can be used in many ways due to cards having different numbers on the two sides. There is a timing for when to play larger combinations, because playing early can get you points and bait out the “Scout + Play” tokens, while playing it near the end of a round can cause the round to end outright.

The first time playing SCOUT, there is confusion galore. “Wait, I can’t move my cards?” “Why are there numbers on both sides?” “Can I flip my hand now?”

But once a practice hand or two have been played, players tend to get it. One of the biggest hurdles is remembering that sets of the same number beat runs. So as an example, if I played a three, four, and five, that would be beaten by a trio of fives. Luckily there are two reference sheets that may be shared about the table if new players have trouble remembering.

There can be luck of the draw that can lead to a huge point differential in a hand or two. One hand that was dealt to my brother, he played a run of five cards to open, we scouted three times to give him more points, then he played another huge set of cards to go out and score loads of points while everyone else scored negatives. The scoring system can also result in large swings. One round, two or three players may score ten or more points, while in the next, the player who caused the round to end scored four and everyone else lost points toward their total score.

Maybe the biggest problem with SCOUT is the component quality. Unfortunately, the cards are incredibly flimsy and with lots of play, they will show wear. If you plan on getting this game (which I recommend you do) be quick to sleeve them. Also, you have to go through unconventional routes to acquire the game, seeing that it’s only being published in Japan thus far.

SCOUT really is one of those “why didn’t I think of that” designs. So much of it makes for a thinky filler that can be taught to family, while also giving long-time gamers a 15-30 minute experience with thoughtful decisions. From the moment a player looks at the cards in their hand, they are asking themselves how best to shed their hand, including committing to their cards as they are or flipping it entirely. It doesn’t overstay its welcome and could be played in between longer games, or carried anywhere in a pocket for travel play.

Final Score: 4 stars – A filler that distinguishes itself through smart decisions and innovative gameplay.

Misses:
• Can be luck dependent
• Swingy scoring
• Thin cards
• Hard to acquire due to Japan-only release