We review Sarah's Vision, a cooperative board game set in a dystopian future. In Sarah's Vision, players must work together to survive all event cards using a plastic Jenga tower as the resources in the game. 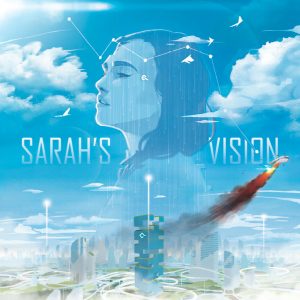 In the not so distant future, technology runs our lives. Unlike the dystopian fantasies our fathers told, this new society thrives. Knowledge is shared, humans see better and better health as medicine advances, the world becomes united. As our planet speeds towards singularity, shadow agents seek to tear apart this tranquility, returning it to the chaos of the early 21st century. Only the Agency stands in their way.

Players take on the role of Agency operatives, working through a series of story-driven events in an attempt to prevent the crumbling of this utopia. Players will have to choose wisely what resources to use and when in order to succeed.

Sarah’s Vision is cooperative game strategy and resource management game for 1 to 4 players. Game time is about an hour. It plays best with 4 players.

Sarah’s Vision is played on a large grid representing the city on which the three characters move to collect inspiration and avoid danger. A Jenga-like tower of resource blocks is constructed to one side. A deck at the top of the play area will produce a tableau of events, and a final area contains a grid from which players can earn additional resource blocks. The object of the game is to advance through the event cards, successfully getting through the entire deck before a character’s danger level reaches five.

On their turn, a player can manipulate the currently available event cards, spend resources (blocks drawn from the tower) to cover spaces on the event cards, or draw directives (additional, more powerful actions that can be used after the event card triggers). Once the player completes their action, an event card triggers. Event cards place danger and inspiration cubes into the city. Danger cubes can damage players or effectively block part of the grid from movement. Inspiration cubes are added to the tracker on the board to assist in collecting resources.

Players continue in this fashion, moving characters around in an attempt to avoid danger cubes and collect resources. If the tower falls, all 5 events currently in the tableau are triggered. If the players can reach the end of the event deck without losing a character, they win. If any character receives 5 danger cubes the players lose. The box contains a few different scenarios, and more experienced players can start games by shuffling together events for a new, random deck.

Steady hands make Utopian societies. Or something like that.

I generally like games that use Jenga towers, such as the RPG Dread. I think it’s a fun way to build suspense via a dexterity mechanic. While it works in Sarah’s Vision, there were a few issues. The blocks are made of hollow, snap together plastic. Many were not as flat as could be hoped, and they frequently wanted to ‘grab’ others in the stack as you attempted to move them. Also, without the weight from others, the tower’s stability is compromised much earlier.

Another issue with the tower is its placement. It has a designated spot on the board. As such, at max player count at least one person is going to have to move any time they have to pull blocks. Additionally, if the tower comes crashing down there’s a really good chance its going to wipe out at least part of the board, and there’s no easy reset unless its fairly early and you have a REALLY good memory. If you’re giving it a try, I’d highly recommend moving the tower somewhere easily accessible and away from the board.

The story is fun. It’s nice to see a future that isn’t filled with nightmare creatures and the fall of civilization. The design follows that – bright and techy with a clean, “tomorrowland” type aesthetic. In general, things are easily visible and the most important cards (the events) are large enough to see across the table.

Although there are scenarios, once you’ve played through the story you’ll just randomize the events. This adds to the replay value, but it would benefit from more story cards to really flesh out the world. Additionally, it starts to feel a little like a one trick pony without the benefit of story.

The block tower mechanic in Sarah’s Vision adds a unique dexterity element to cooperative strategy gaming. A few missteps in implementation of that mechanic can hamper the gameplay though. Sarah’s Vision also has an interesting story that, unfortunately, is played out too soon. A little more polish could have gone a long way in helping this become a better game.

Hits:
• Incorporation of a block tower as a board game mechanic.
• High visibility
• Interesting story

Misses:
• Tower placement can wreck the board.
• Plastic tower pieces just aren’t as compatible as wood.
• Once the story is complete you’re not compelled to return.