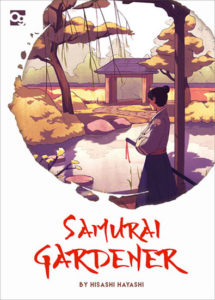 Asian and Asian-inspired gardens always seem to promote a sense of calm and tranquility in me every time I am fortunate to visit one. The careful placement of the rocks, the care of the trees and bushes, and the lush colors of the flowers all create an experience that is greater than the sum of its parts. Wish that I could create that sense of wonder of nature in my own backyard, instead of constantly fighting off the never ending clover in my own lawn.

Fortunately, Samurai Gardener by Osprey Games promises a means of getting away from my own horticultural stresses to create my own impressive garden. Whether it flourishes into bloom or withers away will be revealed below.

Samurai Gardener is a tile-laying game for 2 to 5 players and plays in under 15 minutes.

The goal of Samurai Gardener is to create the layout of a garden and score points by lining up rows of 3-5 of the same type of tile. This is accomplished by playing cards comprised of 6 tiles in varying combinations and orientations. By selecting and adding cards to their layout, players continue to grow their garden and score points over the course of the game.

Samurai Gardener provides two rules variants for card selection. For players who enjoy a dexterity-based approach, players have a short time to examine the cards before slapping the card they wish to select, while a simple draft rule is permitted for players not interested in that type of game.

After cards are selected, they are added to a player’s garden following placement rules regarding overlapping, diagonal placement and breaking up established rows, and placed in a way to extend rows and columns of like tiles. After placement, points are awarded based on the length of the tile string and whether multiple types of tile strings are created. After scoring a particular type of tile, that type cannot be scored again until all other types have been scored. The first player to get to 25 points wins!

Samurai Gardener has a low barrier of entry, with easy rules to learn and teach. Admittedly, Samurai Gardener could be considered to be too simple for some, but adding the restriction on scoring by tile type until all types have scored adds a layer of strategy to the game that provides slightly more depth.

We were gratified by the addition of the rules variant for drafting opposed to dexterity selection, as that type of gameplay does not necessarily appeal to us, and allowed us more time to evaluate our choices for card selection.

The most gratifying part of gameplay is determining the optimal selection and placement of a card to generate multiple tile strips for scoring in one placement. In our plays, we found that players that were able to create combos of scoring early on in the game were the ones that went on to victory. Fortunately, despite the early indicator of victory for a player, the short playtime ensures that a group can squeeze many plays into one session.

While the rules are relatively straightforward, one quibble we found was that the rulebook could use a bit of improvement to deliver those rules in a clearer manner. The simplicity of the rules should be aligned up with a rulebook just as simple.

Samurai Gardener delivers on its promise of a simple, straightforward and fast tile-laying game. It is a good game to throw in a travel bag to bring with you to a game night, or a great game to play with family.

Final Score: 3.5 – Solid game. Delivers on what it promises.