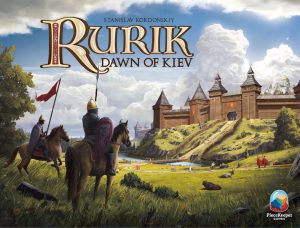 Russian board game designer Stan Kordonskiy may not quite be a household name. Not that many households make it a habit to memorize board game designers…but if there was a shortlist of up and coming designers to keep your eye on, he should be on it. In the last year, his name has graced the front of the box of well-regarded games: Dice Hospital, Old West Empresario, and Lockup: A Roll Player Tale. Today we are reviewing Rurik: Dawn of Kiev which is possibly his most ambitious and unique board game to date.

In Rurik: Dawn of Kiev, players will be controlling a faction attempting to claim the throne of the Kievan Rus after the death of Valdimir the Great. To do this, you’ll have to earn victory points by controlling regions, building structures, and collecting goods for trade.

While that sounds like, more or less, every other area control game on the market, Rurik sets itself apart with interesting mechanisms. You’ll perform actions by placing workers on a central board. The workers (the game refers to them as advisors) can be assigned to a variety of actions: move, attack, tax (to collect goods), build, or scheme.

Each worker you have is given a different value. If you place a worker on the move action with a higher value than the workers already there, you go to the top of the column and get the most powerful action—sliding the existing workers down. The trade-off is that all the workers will activate in numerical order so generally the weaker actions will get performed first and that 5-power worker you placed will be the last thing you get to do for the round.

What really drives this mechanism from interesting to amazing is that you can spend your coins to modify the worker’s power (but not their activation order). So, if you really need a powerful move action at the beginning of the round you can use your 1-power worker and just add a pile of coins with him so he can claim a more powerful action.

The actions themselves and how they execute are pretty straightforward. The buildings give you the most interesting decisions as you have three different types. Fortresses which can add to your presence when determining who is ruling, churches that convert opposing troops, and markets that will give you additional goods when taxing that region.

The scheme action lets you draw some number of scheme cards and keep one, for use on a future turn. The actions from the scheme deck more or less match the actions your workers are bidding for. But because they are hidden and can be used at any time they can be very powerful if your opponents are planning the order of their actions only to have an important troop killed by an attack or converted by a church being built that they didn’t count on.

After everyone’s workers are activated, the round ends and an intermediate scoring happens. You’ll move up the claim board based on your current progress. For instance, if you rule four different regions at the end of the round, you’ll move up to the 3-point spot on the claim board. If you rule more regions at the end of a subsequent round you can move up farther, but you’ll never go down. The points on the claim board for ruling regions, building adjacent structures, and filling your boat with goods are the primary ways to score points in Rurik.

After four rounds the game ends. Points from the claim board are added any points you’ve claimed through bonus cards throughout the game and whoever has the most points claims the throne!

Rurik: Dawn of Kiev’s use of programming actions, especially using money to get stronger actions, is one of the most interesting twists on worker placement in recent history. You can place your workers in any order—so you can save your 1-value guy for the end and send him with loads of coins to take the most powerful attack to begin the round…if you want.

Alternatively, maybe you’ll just add a coin here and there, helping all your workers get a slightly more powerful actions or saving your coins for future rounds. Really each round you may only be focused on one or two of the claim board objectives. If you can score a decent number of points from ruling regions in the first round, you can forego ruling and concentrate instead of goods or buildings.

The only downside—and it can be major, depending on your group—is that trying to program 4-6 actions (you get additional workers in later rounds) in advance can be an analysis-paralysis inducing nightmare. Especially as you may need to consider what everyone else is doing. Perhaps you just want to build a market in Smolensk, tax the goods that are there, and move your troops out of the way. You can certainly program your workers in a way to take the build, then tax, then move action. But if someone else is also taking the tax action maybe that good will be gone! Or what if your opponent is attacking early in the round—you may no longer have a presence in the region to tax anything.

It’s this level of depth that makes Rurik great. But players must accept some amount of chaos when setting their actions as things will likely not develop exactly like they want them to. And that’s not even accounting for the hidden scheme cards that can throw a wrench in your plans regardless of what you can see on the worker placement board.

Once all players have placed all their workers, the activation of them is the stuff of traditional area control games. It becomes a tactical battle to react to the positioning of everyone else as there is little long-term strategy to employ here. In that way, the claim board scoring is probably the most unique element as you don’t have to even rule regions to win the game as you can take different approaches to scoring points—although it costs fewer actions to tax and build in regions you rule.

Everyone also gets a unique leader with a special ability. Importantly, the ability only impacts the region where the leader currently is located, so moving them around can be a drain on your actions. But sometimes it is worth it to really push the advantage that your leader can give you. I appreciate the bit of added depth and asymmetrical powers these give and can help new players feel like they have some direction for their first couple of actions. While I do have some concerns about Rurik having a ton of staying power after a few plays—there isn’t much else different from game to game—these give you a little bit more to explore.

Rurik is worth mentioning for its off-the-charts production quality. Unique leader miniatures. Smaller plastic troops minis. Nice wooden resources for the goods. And molded plastic inserts to hold everything perfectly in place and make setup a breeze. My favorite innovation here is the leader minis have a small number stamped on them that matches a number in the insert so you can see exactly which spot each mini will fit back into.

So long as everyone can sit down and place their advisors to the board in a timely manner, you are likely going to enjoy the experience Rurik: Dawn of Kiev has to offer. The tight economy and the usefulness of coins to claim more powerful actions is a great change to the normal worker placement mechanisms where you just place a worker and immediately do a thing. Just try not to get too caught up on all the permutations of what everyone could be doing.

I appreciate how tactical the actions in Rurik: Dawn of Kiev have felt. Even if the actions themselves are pretty straightforward trying to program them in advance and having to make the most of unexpected situations after you’ve programmed the entire round is really what makes it shine. There may not be a lot to keep you coming back over and over it certainly has some innovation you don’t see in other games. I’ve played it a handful of times and it seems like the type of game I’ll pull down a couple of times a year now that I’ve seen the mechanisms at work.

Final Score: 3.5 Stars – A unique take on worker placement that adds an auction element to an area control game.

Hits:
• Having different valued workers who get stronger abilities but activate later is a simple but incredibly effective mechanism.
• Scoring each category every round allows for changing tactics each round.
• Production is top-tier quality.

Misses:
• Analysis paralysis is real here
• There isn’t a lot to explore after the first handful of games other than new leaders.