We review Reichbusters: Projekt Vril from Mythic Games. The Nazis have discovered a mysterious power source, Vril, that they have turned into horrible, supernatural weapons. This cooperative game pits players as international allied commandos who are trying to put an end to the Nazi’s last hope for victory. 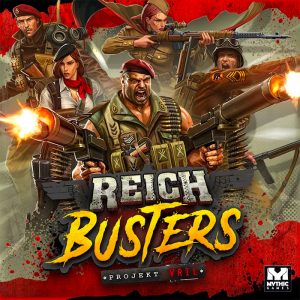 I really enjoy cooperative games. I’m not sure if it’s because you all can savor the win together or have productive table talk about what went wrong in a loss. Either way, it’s usually a fun collective experience for my gaming group and me. Yes, there can be “quarterbacking” at times but it’s usually at the start of a game when players are learning the rules. This typically fades once players become more confident with the rules and it then leads to constructive discussions about what to do that then lead to good (or bad) group decisions.

This brings us to Reichbusters: Projekt Vril from Mythic Games. The Nazis have discovered a mysterious power source, Vril, that they have turned into horrible, supernatural weapons. This cooperative game pits players as international allied commandos who are trying to put an end to the Nazi’s last hope for victory.

Players will need to decide whether to run a RAID or campaign mission. RAIDs are one-off games and the campaign is on-going with character and plot advancement. Once the mission is determined, the setup will be determined by the RAID card or campaign mission. Each hero comes with set weapons, equipment, skills, two feat cards and a custom action deck of cards.

After each hero’s turn, there will be an Enemy turn and it’s made up of 4 phases:

End of Round Phase: when all heroes and enemies have completed their turn, players will draw a card if they have fewer than 5 and the mission tracker will advance a step.

Things to note: Noise is a key element to gameplay that can raise enemy awareness and trigger the alarm. When the alarm is triggered, (aka mission tracker) many enemy units will spawn increasing the likelihood of death to the heroes and making mission objectives much more difficult to achieve.

End game: Heroes will win if they meet the RAID or campaign mission objectives or lose if they do not. Otherwise, the game can also end if the Mission Tracker reaches the end.

I will say that the amount of materials that come with Reichbusters: Projekt Vril is somewhat intimidating when you open-up the core box. But what you will see are the amazing and rather impressive production values of all the components. The miniatures are eye-catching and top quality. Plus, all the other bits, cards, and map tiles all have excellent art and are very detailed. The rule and mission book both use great illustrations and all match the bits for easy reference.

However, there is a significant learning curve to Reichbusters: Projekt Vril because there is a ton of rules, bits, cards, iconography, and keywords to absorb. You should really think of your first and maybe even second playthrough as learning games because you will need to constantly reference the rule book and look up keywords until you become familiar. The rules are not hard to pick up, there’s just a lot to learn until your group hits their grove.

Since players will be running heroes, they should know that the action card decks are key to player success and enjoyment. These cards can be played as free actions and give heroes additional actions outside of the 2 basic ones. Most of the cards except for the feat cards have multiple options for the heroes to choose from. So, depending on what the player wants to do on their turn, these cards provide plenty of options for players to feel like they’re in control. The feat cards are more powerful and one-time use, but like the other action cards, they give heroes nice advantages when needed.

The one key mechanism in Reichbusters: Projekt Vril is noise checks. Just about everything generates noise and, as noted above, noise raises the awareness of enemy troops and can eventually trigger the alarm. I didn’t have an issue with the noise checks when reading the rules but the application in gameplay gets extreme. You will be making noise checks on every hero’s turn… possibly multiple times. Also, the noise checks seem unbalanced like picking up a top-secret folder for an objective having the same noise check as firing a pistol. I get that certain weapons and actions can cause a significant amount of noise but others just seemed excessive and overall it became really fiddly.

The last big plus for me was the option of the mission types. I really liked that RAID card are one-offs and if you want a campaign-style game that the mission book gives you that option. The core box comes with 4 RAID maps, objectives, and enemy factions to mix and match. The Mission Book includes 6 missions plus a bonus one in the Cargo Hold expansion box. So, players looking for different play styles have two to choose from depending on what they or their groups want to tackle.

The last point I felt was a negative were the Post-Alarm rules. The gameplay for the missions, as you can guess, starts off with stealth and for the most part, you want to achieve the object and get off the map without setting off the alarm. I mostly don’t mind how noise rules become more limited (somewhat relieved, to be honest) or how the gameplay becomes more chaotic—those made sense and added to the gameplay. What I didn’t like was how you seemingly spawn a ton of enemy units on the map tiles that the heroes are occupying and the map overall. It was too much too quick. If it took at least 1 more turn it would make sense but it was like the enemy units were hanging from the ceiling and the alarm goes off and poof they drop on top of you.

I said it in the opening and lucky for me Reichbusters: Projekt Vril is another fun coop for gamers to enjoy. The amazing production values of all the game components, multi-use action cards that give players great options and a sense of control, and the two different mission types that give great play options. All these elements make Reichbusters: Projekt Vril another fun coop dudes on a map game for you and your group to try out.

What holds Reichbusters: Projekt Vril back from being a great game is the significant learning curve to get this to the table quick and play it right, an extreme amount of noise checks that bog the game down, and post-alarm unit swarms that are simply overwhelming. All these elements add more frustration than fun to the gameplay.

Misses:
• Significant learning curve
• Noise rules are extreme
• Post-alarm too much too quick