We review Reef Route, a family friendly race game published by Brain Games. In Reef Route, players are trying to be the first to get their fish to the reef or to be the last fish left alive. 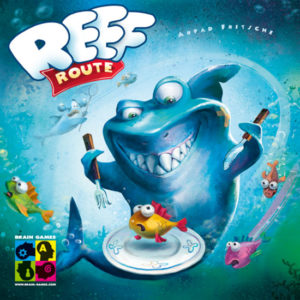 There are some games that kids somehow become familiar with by the time they are about three years old. Tag, and all of its varieties, is one of those. At my son’s preschool they play a somewhat modified game of tag called Sharks & Minnows, which is basically tag where you try to be the last minnow standing.

Reef Route might as well be Sharks & Minnows: The Board Game. It plays 2-4 players, aged 5 and up, in about 15 minutes.

In Reef Route, players will take small fish in their player color and line them up on the left side of the board. Predators are placed on the right side. Each turn you will roll dice to determine what can move. Your goal is to try to be the first to get a fish to the reef or be the last fish standing.

Regardless of how many players are playing, you use fish from all four colors; some of them just won’t belong to any of the players. You can also adjust the difficulty based on the size and number of predators you use. The more and the larger; the harder the game will be.

Each die has two predator faces and one side of each player color. You will move whichever fish or predators you roll on your turn. If a predator lands on a small fish, it is eaten and removed from the game. When moving your own fish or a predator, you can move them up, down, or forward. If you roll an opponent’s color, you move one of their fish forward only.

The game ends when only one player has fish that haven’t been consumed by the big-bad sharks or when a player reached the reef.

Reef Route is basically a racing game, but you have to dodge the nasty predators that are getting in your way. For kids around 5 years old it is appropriately challenging but plenty approachable. My 4 year old struggled a little bit with making the right decision to move up or down to avoid a shark, but was able to understand exactly what to do when prompted a little bit. Playing with kids a couple years older they got along fine and didn’t seem especially bored with it. It certainly isn’t the type of game you’d play after the kids go to bed, but it has enough longevity to not be quickly outgrown.

When you roll a predator, you get to choose which one to move and how. So you will be directly attacking each other throughout the game. Some kids will certainly take this fine but I’ve run into times where it’s a bit of a bummer for everyone involved to be attacking a young child’s fish. Players can also be completely eliminated. Although Reef Route is pretty quick, it does give one more opportunity for your kids to really lose it.

Moving your own fish is by far the most interesting part of the game. Moving forward is always the fastest way to win, but you have to be careful to not get stuck behind a slower fish or run into something that is going to eat you. I think the tactics involved here are plenty interesting for 5 year olds to be exploring.

The illustrations are cute in a kid-friendly cartoon type of way. There are some issues with the rulebook as they don’t particularly explain a few key rules. For instance, it says you “may” move your opponent’s fish when you roll their color. I assume that you must, otherwise you’d almost never do it. Unless there is a shark right in front of them, of course. Which also isn’t a scenario covered by the rulebook, but we assumed it would eat you.

Reef Route is fun enough as a kids game, but makes a couple of odd choices. There is a lot of direct interaction where you are choosing to eat the fish of other players. This may be a bigger problem for some kids than it will for others, but be warned. For a game geared toward 5 year olds, it can certainly lead some unhappy moments. That said, my son also really loved eating my fish and got quite a kick out of that part.

I was able to play Reef Route with a couple different kids in the 4-6 year old range and their engagement was very different. Not so much with age, but with interest in fish and sharks. If you think your kids will dig the theme and isn’t too bothered by being attacked in a game, Reef Route is worth checking out.

Final Score: 3 – Reef Route is quick and fun kids game, but hampered by its direct conflict.

Hits:
• Plays quick and looks great
• Lots of kids will be attracted to the theme

Misses:
• Player elimination and attacking other players directly
• Simple rules but rulebook is missing some info