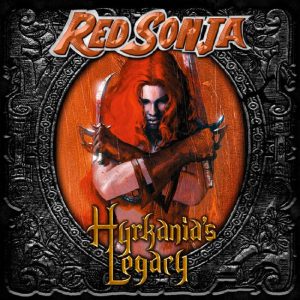 Back in 1973, the Marvel Comics creative team of Roy Thomas and Barry Windsor-Smith brought us Red Sonja, a female warrior in the world of Conan: The Barbarian. Over the years, this Hyborian fighter, eventually went on to star in her own series (the Gail Simone issues were one of the best runs for those interested.)

But enough of the history lesson, most people now probably know who this heroine is, and Dynamite Entertainment has brought the lore of Red Sonja to a board game titled Red Sonja: Hyrkania’s Legacy. Funded on a Kickstarter in 2017, this cooperative game has players trying to defend the realm in a handful of different scenarios. So let’s dive in and see how it plays.

Red Sonja: Hyrkania’s Legacy (simply Red Sonja from now on) comes with 4 different scenarios, but they all usually involve you exploring the realm, bolstering your castle, and trying to defeat a big bad evil guy. Each play controls one of the iconic characters from Red Sonja’s history, each with their own unique ability.

Every round has a player phase and an enemy phase. During the player phase, each player gets 3-6 actions (depending on player count). These can be used to move, explore, heal, or gain destiny (rerolls). When you encounter one of the game’s many enemies, you must fight (free action) as no other actions can be taken while on a tile with enemies.

Combat is easy. Each enemy has specific symbols on their token that the player needs to roll to defeat it. There are 6 symbols in total on each D6, with one of the symbols being a wild. Defeated enemies are kept as trophies to be spent upgrading equipment and items. Some items will grant permanent symbols to be used. Failure to defeat all the enemies on your tile results in a wound. Three wounds and you are knocked out.

After the players have used all of their actions, the enemy phase occurs. Each enemy sharing a tile with a player will activate. Usually these will deal wounds or force the discard of destiny tokens. Finally, one despair token is added to the castle. If the castle ever gets six despair tokens, it’s game over.

Players win when the accomplish the scenarios goals. Usually this will involve a showdown with an arch villain, such as Loki or Kulan Gath.

While there is a lot of combat in Red Sonja, the game isn’t just about swinging a sword. Players will be forced to juggle a lot of balls if they hope to even have a chance to win. They must spend their time exploring, recovering, fighting, and also trying to keep the castle from falling. Exploring will probably be happening constantly, and thanks to the many terrain tiles, each game is going to play out a little bit different. The large combination of tiles and explore cards help to give Red Sonja a decent amount of replay value, despite only having 4 scenarios.

However, I feel that the exploration rules feel somewhat fiddly. Each type of terrain not only has rules on what you can explore from it, but also positioning rules. A good two pages of the rulebook are taken up just on how to place a new terrain tile. Once you get a game under your belt, it becomes a bit more natural, and it is fun watching the world build as you play.

Yet that’s probably where a lot of the fun will stop, because Red Sonja is somewhat crippled by the inherent randomness that’s baked into everything the game does. From the dice rolling in combat (2 in 6 chance of success), to what tiles you draw, to the encounter cards, to the market, Lady Luck is going to be a huge factor in the game. In fact, it’s entirely possible to lose the game in round 6 through no fault of the players.

Every enemy phase, a despair token is added to the castle (6 tokens for a loss). The only way to remove those is to find the terrain tiles that let you bolster the castle. Each terrain type has 1 or 2 of these tiles. Should they be shuffled into the bottom of the stack, you might not ever see them in time. And even if you find one, you need specific enemy trophies to activate them, buying you one extra round. So players must hunt for these very quickly with no guarantee that they will find them or even be able to use them.

And the problem with exploring so much is that almost every encounter card will be damaging you or dumping enemies on the board. And since you can’t do anything else while in a tile with an enemy, you have to fight. Fighting is simply rolling 4 dice and hoping you get the right symbols. Destiny tokens can be used for a reroll, but failure to kill all the bad guys result in a wound. Once you get 3 wounds your character is knocked out (which is all too easy to happen). Overall, I just felt like I was constantly dependent on either the dice or random draws in the game, which just sucked the fun out of it. Red Sonja is supposed to be a fearsome warrior feared through all the lands. In our games, she would die early and often.

Getting items does help with the combat, but to shop, you first have to find a market tile in one of the stacks. Then you have to hope one of the three cards in the shop will match the trophies you have. If not, then you are stuck drawing from the item deck which are minor, one time use items (heal, gain a destiny, etc.)

Finally, let’s talk about the components. The art in the game is…not great. For a IP with the history of Red Sonja, it was a huge letdown for the art to look how it does. They could have drawn from the huge catalog of comic art, instead, what little art their is feels uninspired. And the rulebook is not great to learn the game from. Important rules are easily missed (such as one die side being wild), and the entire rules about what happens when you are knocked out are missing. This rulebook is badly in need of an experienced tabletop proofreader.

As much as I always enjoyed Conan and the Red Sonja comics, Red Sonja: Hyrkania’s Legacy was a huge miss for me. The gameplay was punishingly random and prone to wild swings of luck. You could be doing fine one round, and then failure to kill a bad guy can end up killing you a moment later. The game is severely lacking any control by the players.

While not all is bad in Red Sonja: Hyrkania’s Legacy, the game does offer some nice replay value and attempts to tell a story with the exploration cards, none of that outweighs the poor rulebook, artwork, and subpar mechanics. Unfortunately I can’t even recommend this one to even the most die hard of Red Sonja fans.

Final Score: 1.5 Stars – A game that had some good ideas, but can’t seem to get out of its own way when it comes to the randomness and poor production values.