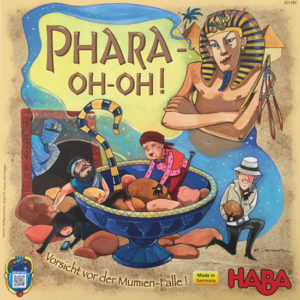 When I think about the classic movie monsters, Frankenstein’s creation, Dracula, Creature from the Black Lagoon, and the like, the one that I never found particularly interesting or scary was the mummy. He wasn’t very fast and had extremely flammable clothing that I’m surprised didn’t smolder when they shambled across the floor. It took adding superpowers and star power of Brendan Fraser to make the late 90’s classic The Mummy worth watching.

Today, we will be looking at a children’s game that features one of these creatures in Pharaoh’s Gulo Gulo. Players will be tasked with moving their characters through a pyramid without causing the Pharaoh’s wrath and break the curse. Let’s get to the review to see if this is a game to add to your family game night rotation.

Pharaoh’s Gulo Gulo is a game for 2-6 players to complete in under 45 minutes. In my experience the game plays well at all player count and can be enjoyed by kids aged 5 and up.

Robbers raided pharaoh Anopheles grave long ago and stole the treasures buried with him, including his precious scarab beetles. Since that time, the mummy of Anopheles has been roaming the halls of the pyramid scaring away anyone who dares enter.

In order to move around the board, players will need to pull the appropriate boulders from the snake trap bowl without causing the Pharaoh’s staff to fall out. They will need to use a combination of strategy and nimble fingers to do this successfully. If this wasn’t difficult enough, they will have to avoid the mummy while making their way to break the curse and win the game.

Every time I get a HABA game, I know what to expect in terms of components because their commitment to high quality is almost unmatched. Pharaoh’s Gulo Gulo continues this trend. However, it is the subtle elements of the art and components that make this one stand out. The board is gorgeous and manages to paint an amazing picture both out and inside the pyramid. What I like most is the small details that are used to add a little extra to the board. A hidden nest in the status, the hieroglyphics sprinkled throughout, or how the boulder tiles make eyes when put together. These little touches go a long way to make the components memorable.

I admit I was concerned about the Pharaoh’s staff used in the snake trap. The staff part seems that it could be easily broken. Thankfully through many games, mine has made it through without incident but I remind my kids to be careful with it.

The components overall are great, but there is one glaring oversight that I just can’t understand. While the game box looks about the size of a standard game box, unfortunately it isn’t. It is slightly larger and just big enough to not fit on my main gaming shelf. I wish they could have shrunk the board just half an inch to get the box to a standard size.

Each turn consists of two phases, exploration and movement.

Along the path towards the pharaoh’s tomb there are markers depicting one of the four boulder colors in the snake trap. At the start of the game, the colors of boulders on the tiles are not exposed. During the exploration phase, player must decide to either flip over the next unexposed tile or choose a color to pull from the snake trap.

You then have to pick that corresponding boulder with one hand out of the bowl, without causing the Pharaoh staff to hit the game board or cause another boulder to fall out. If you fail to pull out a boulder successfully, you have caused a landslide and have stopped your progress. Players will then reset the snake trap by placing all the removed boulders back into the bowl and place the Pharaoh staff back in the center.

Then movement phase starts. If you caused a landslide, your character moves back to either the starting tile or to the opening of the pyramid depending on their current location. If you don’t spring the trap, you will move your adventurer to the next space with that color boulder you removed, either forward or backward.

Once you are inside the pyramid, there are a few other things you need to know about. On certain spots are scarab icons. Players will need to find their way to these spaces at least twice a game because two are required to enter the tomb. Also, wandering the halls of the pyramid is the mummy. It moves when players move to a location where the tile has small mummy icons on the tile. If the mummy moves into a space with a character, that player will give the mummy a scarab token or be forced to go back to the opening of the pyramid.

Players will continue to move around the pyramid until one player gets to the opening of the tomb. If the player has two scarab tokens, they can flip over the two boulder tokens in the room and attempt to pull both boulders from the trap. Failure results in being transported back to the front door of the pyramid. If they are able to do this, they break the curse and win the game.

What I enjoy most about playing dexterity games is that they tend to level the playing field. Years of experience isn’t required to be successful at a game that employs this mechanic. However, in Pharaoh’s Gulo Gulo that is not the case, because the dexterity element makes the game much more difficult for the adults playing the game.

Every adult that has played, with a varying hand sizes, has struggled with the removing of the boulders from the trap. This is due to the small size of both the boulders and bowl, and how easy it is to cause the stick to fall over. This doesn’t mean that you can’t win the game, but you have to use a little more strategy with the boulder removal each turn.

My four year old on the other hand, can reach into the bottom of the bowl and grab the piece he needs without moving anything else. Maybe that is a slight exaggeration, but it’s still way easier for kids to pull from the trap. I love this. I admit it is a frustrating to know that you are at a slight disadvantage and almost a dead man walking trying to pull the boulder out, but the kids get such enjoyment from your struggle. The amount of tension and laughter from parents failing to stop the staff from hitting the table is some of the joy that comes out of playing the game.

Outside of the dexterity element, there is a little more strategy in the movement then just to go the furthest you can. The requirement of scarab tokens makes players think about how they want to proceed through the pyramid. The location of the mummy might make you decide where you want to move as well. Players can choose to move to tiles that allow them mummy to move through other players spaces, causing them to give up a scarab or be force back to the start of the temple. This is more for the adults to use because my kids never used this element. It is a little advanced for them. However, they are able to get the ideal of optimal movement for each turn.

My kids always wanted to flip over the next tile on each of their turns. Sure it is exciting to see what is there, but not always the smart play. This is due to the rule that you move to the first tile of that color on the path. I was able to show them that if all four colors are in between you and the exposed tile, you should move as far up as you can, rather than flip the tile. This isn’t much, in terms of teaching game mechanics, but an important one to teach. They also do a little risk assessment as more and more boulders get taken from the bowl. At times it isn’t the smartest play to take the boulder color that moves you the furthest. There is a lot of decision making in the game rather than a reliance on die rolls to move the game along.

On slight negative for the game is what happens when you fail. Moving back isn’t the biggest deal when you are outside or moving through the pyramid, however, it is when you are attempting to break the curse and end the game. If a player fails to remove the two boulder requirement they are sent back to start. This basically means you have lost any chance of winning. The scarab requirement and the distance make it very difficult to get back into the game. It isn’t the biggest deal for adults, but it was quite devastating for the kids I played with.

Besides adding time to the game, playing up to the max of six players isn’t an issue. The pace of play is extremely quick that the game doesn’t bog down. Plus, the extra time can give you a chance to look at the wonderful art on the game board.

Pharaoh’s Gulo Gulo is a wonderful dexterity game for kids. It adds a little more complexity than HABA’s other dexterity offerings. While the choice of box size will force it off my main gaming shelf, it isn’t forgotten by my kids. They often ask to play it because of the tile discovery and the enjoyment of watching adults struggle slightly with the boulder removal.

Pharaoh’s Gulo Gulo teaches kids about optimizing movement and risk assessment as they evaluate each move. I love that this game is driven by choice rather than dice rolling and kids enjoy that freedom.

If you’d like to get a copy of Pharaoh’s Gulo Gulo, you can pick it up for about $40.

Final Score: 4 Stars – A strategic decision making finds its way into this dexterity game that gives kids choices rather than relying on randomness.

Hits:
• More than just a dexterity game
• Beautiful art and components
• Adults will struggle to the kids delight

Misses:
• Size of the game box doesn’t make any sense
• Tripping the trap late in the game is quite devastating