We review Paranormal Detectives, an investigation game published by Lucky Duck Games. In this party game, players are competing to be the first player to figure out all the aspects of the crime. 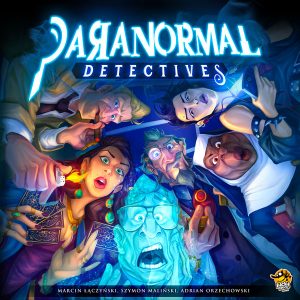 When it comes to mystery-solving and investigative games, Clue used to be all we had to play. What was once a mediocre genre is now thriving with many excellent options (note to self: Do a Top 10 Investigative games list). With that in mind, we are going to set our sights a newcomer to the genre, Paranormal Detectives from Lucky Duck Games. This party game tasks a group of paranormal sleuths with trying to be the first to discover the details of a murder most foul.

The standard gameplay for Paranormal Detectives is semi-cooperative, with one player taking on the role of the ghost and the rest of the players trying to be the first to solve the mystery based on the clues the ghost provides. Note: the rules do have a gameplay variant for fully cooperative play.

Each game starts with a murder in which the ghost provides a very brief description of how the body was found (we are talking like 5 words). Each player is trying to be the first to identify the Who, Why, How, Where, and Weapon of the murder.

To do so, each player takes a turn by asking a question of the ghost (it cannot be a yes/no question). The form the ghost will answer depends on the investigation card played by the player. These cards range from thinky (decipher letters spelled out) to silly (pantomime) but all will have the ghost answering in some abstract way. The answers are also public, so other players can try and glean the same information as the person who asked the question.

If a player thinks they know all 5 keywords, then they can attempt to solve the mystery after asking a question. They say their answer out loud and if they are correct, that player and the ghost wins. If not, the ghost secretly tells that player how many correct words they had (but not which words). Once a player has made two guesses, they are eliminated from the game. If all players have made two guesses and no one was completely correct, then the player with the most correct guesses is the winner.

Paranormal Detectives is a game that’s success will largely depend on the group playing. While this isn’t a full on, goofy party game (ala Happy Salmon), it definitely trends towards the lighter end of the spectrum. The way the ghost can answer questions—drawing on people’s backs, silently mouthing words, arranging ropes—is going to require outgoing players who are looking to relax and have fun. If you want a more serious sleuthing experience, you’d be better off choosing a game like Detective or Chronicles of Crime.

As a party game, Paranormal Detectives is pretty fun. I’ve played this one with both my family and gaming group and everyone was able to get into it. Learning the game is very simple, so this one definitely works well as a gateway game as well.

My only real hang-up with recommending the game is that some of the mysteries can get really specific. There were times when the players were bordering on frustrated as they knew most of the aspects of the crime, except for a few stragglers that were just too specific to figure out from the ghosts’ abstract communication. Given the light nature of the game, I probably would have liked some more general mysteries, or at least divided into different difficulty levels. That way if I were playing with experienced players, I could choose one group and my casual friends another.

That being said, Paranormal Detectives does present a unique take on the genre. It has an almost Treasure Island feel to it. A game where you must listen when other players are taking their turn so you can suck up any information that’s available. And with only a limited set of cards and guesses, you really do have to be strategic about when you take your chances. You don’t want to guess too early and not only be down one of your two guesses but provide too much information to your opponents allowing them to access to information they might not have known. But if you guess too late, you might just get beat to the punch by a sharp-witted player.

Paranormal Detectives is another solid offering from Lucky Duck Games who have really been on fire with their recent releases. As a mystery guessing party game, it works quite well if you can handle the overly specific puzzles. And I appreciated that the game can be played fully cooperative if you just want to work together with all the players. For players wondering how this one might compare to a similar game in the genre, Mysterium, I think it takes the concept to a whole new level. The added interaction and different ways the ghost can communicate in Paranormal Detectives makes the game a lot less repetitive and much more engaging. If you’ve been looking for a replacement for that title, you may have found it here.

Final Score: 3.5 Stars – A unique take on the investigation genre that can be a lot of fun with the right group.

Hits:
• Good amount of interaction between ghost and players
• Can be played semi-cooperative or fully cooperative
• More graphic mysteries are flagged if you want to keep your game family friendly
• Easy to learn, highly accessible

Misses:
• Some of the mysteries get really specific
• Needs the right group to really shine