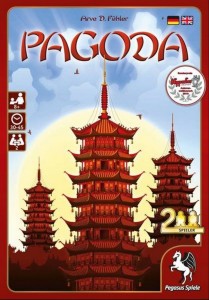 My wife is the most dependable and accessible member of our gaming group, which makes any game that plays with just two players immediately relevant to her interests. She is also drawn to the culture of China, with rich history, traditions, art, and language. It should come as no surprise that Pagoda, by AEG, is a game that scratches both of those itches. Does Pagoda help you on the path to inner peace and nirvana, or does it leave you stuck in a cycle of repetition and sadness? Read on to learn more.

Pagoda is a hand management card game for two players, with a game time of about 30 minutes.

Pagoda puts you in the role of a master architect who is charged with building new pagodas before the arrival of the Emperor, who is coming to visit your province. This is done by building columns, floors, and roofs of the pagodas by playing cards that have been collected over the course of the game. Depending on the color of the floor or roof that is built, a player may earn special powers that can be used in pagoda construction.  Players earn points for each column and level of the pagoda that they construct, with the winner being the player who has the most points after the third pagoda is completed.

The components for the game are of typical quality construction, with colored wooden cylinders serving as the pagoda columns, and thick cardboard tiles serving as the floors and roof. One issue that was noticed is that on the tiles, it was sometimes difficult to differentiate between the blue and purple column spaces.  This could be an issue endemic to our copy and print run of the game, but it should be taken note of.

The artwork on the boards, cards and player boards is typical for an Asian-themed game, but it is merely functional, not adding anything more to the theme or the game. Fortunately, any artwork issues are outshone by the fact that you are physically constructing pagodas, which adds to the quality of the game play experience.

Pagoda is a fairly easy game to learn. On their turn, each player can play cards that correspond to the color of the pagoda component that they wish to build. A player can build up to three columns per turn by playing a card (either from their open hand or from their secret hand) of the matching color of the column they wish to build. A player can also build a pagoda floor in the same manner.  After a pagoda’s fourth set of columns is built, a player builds a roof and spire, finishing the pagoda.

Pagoda construction follows specific rules, which provide much of the strategy of the game. The base of the 6 pagodas on the game board are neutral, which means that all the columns need to be of the same color, but that can be any color of the players’ choice. Once the first four columns are built, a pagoda floor can be built, which has to correspond to the same color as the columns. For example, if there are green columns on the first level, a player must build a green pagoda floor. This player can choose one of the five green floors, each of which has a different color column that will be required to continue construction.

Special powers are awarded to players when they complete a pagoda floor, and are dependent on the color of the floor that is completed. These powers include being able to draw two extra cards into your hand, use two matching cards as a wild card (for building columns or levels), refresh your hand through discarding and drawing, or to build an extra column per turn. Each time you build a pagoda floor, you receive two uses of the special power, which can only be used once per turn.

After each player finishes their construction, they are awarded points based on the level of the pagoda where they built columns, and on pagoda level construction. After the third pagoda is completed, whoever has the highest score is declared the winner.

Pagoda provides a game with very easy rules and quick game play, while at the same time provides a game with subtle strategy that provides a worthwhile experience. For a good part of the game, a balancing act in strategy was taking place in determining what were the optimal moves for you while simultaneously attempting to deny your opponent their own optimal moves (i.e. to prevent them from finishing a floor and getting a special power). Having some knowledge of the opponent’s hand and construction options is a solid means of providing players with just enough information to lend to the strategic thinking required to excel in Pagoda.

There must be some sort of human urge to build things, because physically constructing the pagodas was a very satisfying experience and continues to be. There is a simple elegance to the rules and requirements surrounding the construction, as well as the scoring for each pagoda.

It needs to be mentioned that the theme is 100% pasted on, which was somewhat disappointing to players who were interested in the theme. It could have been rocket ships or skyscrapers or robots or a hundred other things – the Asian theme drew us in but left us wanting.

Much of the strategy in the game dealt with denying your opponent the ability to build a pagoda floor and gain special powers, which became very important when we realized that the powers were unbalanced (at least in our estimation). We felt that the purple power, providing you the ability to draw two more cards into your hand, was a bit overpowered, as more cards available provided more options in construction. We felt that in the games that we played, gaining the purple power was the key to victory.

One of the major points of strategy that was overlooked until the end was that as the pagodas get built, the options for colored floors become more and more narrow, which left an unsuspecting and inattentive player stuck without a move on their turn. This just reinforces the fact that while the game is relatively simple to play, there is quite a bit of strategy that is involved when planning your moves.

Pagoda fulfills its role as a two-player game that can be played quickly, is simple in rules but somewhat deeper in strategy, and is friendly to both gamers and non-gamers of all ages. Physically building the pagodas is a fun aspect to this game, and the strategy with the order of construction and the special abilities gives it some staying power in terms of replay value. Pagoda is recommended for any gamer looking for a solid two-player game to add to their collection.

If you’d like to add a copy of Pagoda to your gaming collection, you can pick it up for about $25.

Final score: 3.5/5 – Good enough in all the right places to add to your shelves.

Hits:
• Actually building the pagodas
• Simple rules and fast game play
• Surprisingly and subtly strategic
• Good for all ages and all game experience

Misses:
• No connection between game play and theme
• Unbalanced special powers in game 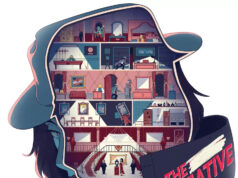