We review Nuked, a card game where players in post-apocalyptic setting are gathering supplies and then trying to obtain enough settlers to win. Nuked is light on mechanics, but has a whimsical approach which should help get it to the table. 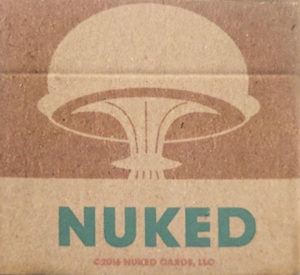 I don’t know what it is about the post-apocalyptic genre, but I’ve always gravitated towards it. Logically, I shouldn’t – it’s the fall of civilization and no one wants that. I mean I like hot water and cold beverages and can do without roving bands of raiding mutants. Maybe it was growing up with movies like the Road Warrior, games like Gamma World, or comics like Judge Dredd. In any case, I’m drawn to this genre for some reason.

Nuked is a card game for 2-8 players, plays between 25–30 minutes and plays best with 4 players.

The goal of the game is to gather supplies and then gather 200 points in Settlers for the win or 400 points if you’re playing teams.

On their turn, players are only able to play one Nuked card and if they have no playable cards, they must discard 3 cards and draw 3 new ones.

If players have a playable hand, they will likely place face up Supply Cards, or when they have enough points in Supply Cards, play a Settler of equal or less Supply Card points.

During play, other player or teams will be playing cards to destroy your supplies and settlers, such as Swarm or Nuke cards, or play cards to protect themselves from these dangers, such as Bunker or Truce cards.

A player also has the option to draw one Fate Card per turn and see if they receive a positive or negative effect.

Play will continue until a player or team gathers enough points in Settlers as noted above.

Let me start off by saying that Nuked is not a serious game. It’s pretty clear when you open the box and see the Settler and Fate card art which is designed after post-apocalyptic street sign pedestrians. This is not a negative, I actually really like this unique art and it helps support the theme.

Nuked is also very portable, almost to a fault. The cards are roughly the size of one-half of a regular playing card. This makes the game easy to carry, but the size does make it challenging to shuffle, especially if you’re like me and born with sausage fingers. The other issue with size is holding the cards. They’re quality made but hard to hold and view given the size. I found myself stacking cards in my hands for comfort and spreading them out when it was my turn.

One big plus is Nuked is easy to learn and could be a nice gateway game for new players (or a filler). I’m somewhat torn by how the rules provided in the box and the ones online compare. The rules in the box are an overview and I get it given the small size of the cards/box. You can get this game to the table with the box rules. I’m torn though as I prefer the online rules because those are so much fuller and detailed.

The Nuked Deck is made up of mostly Settlers and Supplies. In a normal game there will be 4 Specialty each card type: Nuke, Swarm, Truce, and Bunker. The Nuke card, as you can imagine, is very powerful and can destroy an opponent’s face-up Supplies and Settlers. The Truce is excellent and a good balance to the Nuke Card because it can stop a player from being nuked. The other card that adds balance to the game is the Swarm card. These only destroy face-up Supplies, which stops a player from buying high-priced Settlers for a few turns.

The only Specialty Card that seems underpowered is the Bunker card. This card is played pre-emptively and will protect against Nuke/Swarm card for one turn. The next turn, the Bunker is discarded and the player can put one Settler in play for free. Now putting a high value Settler in play can be a game changer, but guessing when players will use Nuke or Swarm cards is very random. In our plays, most players held onto their Specialty cards until one player reached over 100 points in Settlers. The Bunker at best was a one turn delay of being nuked or swarmed. It just didn’t seem worth playing it as your one card for a turn.

The last deck to note is the Fate Deck. This deck definitely has an event card feel to it but what I didn’t like is that it’s up to each player if they want to draw from it each turn. The Fate Deck effects are very random and seem to give a player a 50/50 chance for risk or reward. The randomness seems to only appeal to players who were playing from behind, desperate, or bored.

I think Nuked is a rather easy game to learn and play. It very portable has unique artwork that helps supports the post-apocalyptic theme. The game play is light enough for seasoned gamers as a filler or a gateway for new gamer. Nuked also provides needed level of humor from such a serious subject.

Unfortunately, the card size in Nuked does make handling and shuffling challenging. Most of the Specialty Cards give nice game balance, except the Bunker Card which seems underpowered and has too much guess-work in when best to use it. The Fate Deck is too random in its use and with its effects.

Final Score: 2.5 Stars – An ok card game that’s easy to learn and play but has some flaws that hold it back from regularly getting to the game table.