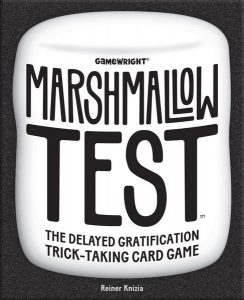 In 1972 researchers at Stanford University conducted the Marshmallow Test. This was an experiment that studied delayed gratification in children. Either take a marshmallow right now or wait 15 minutes and get a better treat. You can browse the results here if you are curious, as there is too much for me to summarize in just a few sentences. What does this have to do with board games? Apparently acclaimed game designer Reiner Knizia was inspired by this experiment and has brought it to our tabletops (kind of) with his trick-taking game Marshmallow Test.

If you’ve ever played a trick-taking game in the past, you can jump right into Marshmallow Test. The goal of the game is to be the first player to collect 20 points. Each round, a player chooses a card to play and the other players must play a card of the same color. The player that played the highest card of the lead color collects the trick. Once a player has won several tricks (depending on the player count) they go out, earning points for the number of tricks all their opponents have currently won.

A round ends when there is only one player left, who earns zero points. A new round then begins with that player starting and gets to choose a trump suit. Play continues in this manner until one player has won.

Marshmallow Test is a hard game to review. It’s essentially a trick-taking game with a slight twist. Chances are, you’ve played a trick-taking game by this point in your life (hearts, spades, euchre, etc…) so you know what you are getting. Whether that twist sets it apart enough for you to pick it up over more unique trick-taking games like The Crew, Diamonds, or Fox in the Forest is up to you.

So, let’s talk about that twist. The delayed gratification aspect of Marshmallow Test is pretty clever. You want to win tricks, but not too many right away. This does create some nice decision making where you must decide when to play your high cards vs low. This is especially true later in the rounds where you’ll need to try and guess what your opponents have left in their hand. Going out second to last is awesome, going out last is really bad.

I’ve also found that Marshmallow Test definitely plays best at the higher player count. While it plays fine with 2, you are better off with something like Fox in the Forest when it’s just a pair of you. The game doesn’t really shine until you get more players at the table, at least 4.

Finally, the components are just OK in Marshmallow Test. The marshmallow tokens are cute and fluffy, but the cards almost seem like an afterthought. The feel fairly generic and I’m not sure that they are the most accessible to colorblind folk.

So where does Marshmallow Test fall in the spectrum of trick taking games? It’s good, but probably not great. It’s worth a play or two every now and then, but I don’t see people rushing out to pick this one up, except for maybe the most diehard of trick-taking fans. It just doesn’t do enough to set itself apart in a very crowded genre of games where designers are shooting off in all kinds of new directions.

Final Score: 3 Stars – A solid offering in the trick-taking genre, but one you’ll probably play a few times before it ultimately languishes on your game shelf.

Misses:
• Card components feel like an afterthought
• Needs at least 4+ to shine