We review Maiden's Quest, an adventure card game published by WizKids Games. In Maiden's Quest, 1-2 players take the damsel in distress trope and turn it on its head as they play the maiden trying to rescue herself. 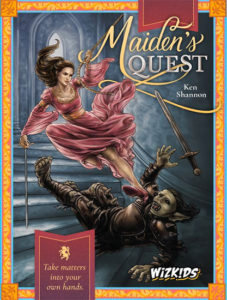 It’s a story as old as the hills: a maiden is kidnapped and hidden away in a tower waiting for rescue from a savior. Sounds familiar and boring. Now imagine instead of sitting around and biding her time, she takes the initiative, breaks down doors, kicks bad guys in the face, and escapes all on her own. This second tale is a story far more interesting and relevant to our more enlightened thinking and is the story that put forward by Maiden’s Quest, the newest card game by WizKids.

Maiden’s Quest is an adventure card game for 1-2 players, which can be increased to 3+ with a second game box. Maiden’s Quest plays best with one player.

Maiden’s Quest begins by constructing the adventure deck which represents the tower that the maiden has to escape. It is filled with personality traits that represent health, obstacles to overcome, enemies to defeat, and items to aid in her journey to flee from her captor. Each card has a set of icons that represent basic powers like magic or melee, or special powers like being able to draw more cards or flee from a monster.

Play begins by cycling cards to the back of the adventure deck until an obstacle is encountered. These obstacles can take the form of monsters, locked doors, and the big bad evil captor, each with their own set of requirements to overcome. When an obstacle is encountered, the next five cards are fanned out, displaying their respective icons. If the icons shown meet the obstacle requirements, it is defeated and players are rewarded by upgrading cards or finding treasure. Otherwise, damage is dealt and cards become downgraded.

Play ends when an escape condition is met (changing with each captor), or when a maiden loses all her health. As a two-player game, play can be cooperative where both maidens work together to overcome obstacles, or as a race to see who can escape first.

On paper, Maiden’s Quest appears to be relevant to many of my interests. An innovative theme with women characters that rely on their strength and resolve to rescue themselves, along with their would-be rescuers? Fighting to escape a fantasy tower filled with magic, monsters and mysteries? A game that can be played just as easily solo as with another player? Check, check, and check. I should love this game!

The problem, sadly, is that I don’t. The game is nothing more than an exercise in flipping cards until you run into an obstacle, deciding whether you want to flee or fight, then hope that you are lucky enough to get the right combination of icons in order to pass. It quickly becomes extremely repetitive and boring. Gameplay is dry as all get-out, even with us doing our best to craft fun narratives around the different powers and items and whatnot. It barely held our attention for a single playthrough.

It really is a shame that the play is so poor because, on the surface, this appears to have great potential. The upgrade/downgrade process, driving health cards to count down and for items to power up progress by changing their icons, is different and novel. This primary mechanic is one we cannot remember having seen in games before, and wish it was implemented in a more engaging game. Maiden’s Quest also packs a ton of potential replay value, with a wide range of maidens, captors, treasure and the like – a huge pool of cards to put together into an adventure deck. Unfortunately, the different combinations end up being variations on the same repetitive gameplay.

Maiden’s Quest attempts to shake things up through rules variants outside of solo play, including co-op, racing, and large team competitions. The 2-player co-op mode provides a scant more interest, with players having to determine how many cards each player will provide to attempt to defeat the obstacle. While this provided more strategy to the game, it does not make up for the fact that in order to play co-op, you have to go through two rounds of solo play.

It really breaks our heart that Maiden’s Quest does not hit the mark because we absolutely love the theme. More games need to be developed with women characters in the lead, and Maiden’s Quest provides a fresh and modern take on the tired damsel-in-distress trope. It gives agency to the maidens in a way that benefits our (hopefully) more enlightened times and we hope that other game designers follow their example.

We had higher hopes for Maiden’s Quest, a game with fails to reach its potential for an innovative game with serious replay value. Unfortunately, the repetitive nature of cycling cards and the baffling luck-based mechanics creates a game that leaves plenty to be desired. Sadly, we recommend giving Maiden’s Quest a pass.

Final Score: 1.5 Stars – A wonderful theme and neat mechanic are only the redeeming factors in a title that is devoid of any fun or engagement.