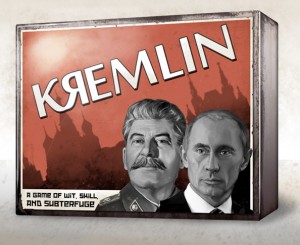 In Soviet Russia, game plays you! OK, now that is out of the way its time to look at this weeks Kickstarter of the Week: Kremlin. Kremlin was originally released in the 1980s and has long been out of print. Jolly Roger Games has decided to breathe some new life into Kremlin and has turned to Kickstarter for its re-release. Jolly Roger Games is promising that every penny of the Kickstarter will go towards better quality components for the new edition.

Kremlin is a game of political intrigue set in the Soviet Politburo. Players will secretly influence politicians all while trying to promote their own deals. The goal for the players is to get their controlled Party Chief to wave 3 times at the May Day parade. Do that and you win the game. If that doesn’t sound too exciting, don’t worry, there are much messier ways to win too. If you like games of backstabbing, wheeling and dealing and sneakiness then Kremlin is worth checking out.

As an added bonus, this new version of Kremlin will be providing three different play options in one box. From the Kickstarter page:

#1: The ‘original’ with fictional politicians, set in a USSR where KGB investigations send those found guilty to Siberia.  This version will have victory conditions based on the original Fata Morgana rules.

#2: A version inspired by the Avalon Hill variant titled ‘Revolution’.  Set in the 1920s, it uses historical politicians as well as fictional politicians.  It’s a more violent game as those arrested by the KGB are shot and removed from the game

#3: A new version, set in the modern USSR and Russia, an era of entrenched bureaucracy and alternatives for escaping KGB persecution.  This version introduces the concept of “Going into Exile” to avoid Siberia.  It also includes modern politicians from the 1960s onwards, whether it is Kosygin or Putin and Gorbachev.

If that sounds interesting to you then head over to the Kickstarter page and check out Kremlin. They have a more comprehensive game summary on their campaign page, as well as stretch goals and backer rewards. One of the best things about the Kickstarter is that backers can get the game for a very affordable $25. The game is expected to be delivered on January 2014 and you have until July 10th to back the project. Head over today and join the revolution!