I love a good martial arts movie. From old classics such as Enter the Dragon to more unique movies like Crouching Tiger, Hidden Dragon, I’m always entertained with some good hand-to-hand fighting. With that in mind, I’m pretty excited to try out our newest Kickstarter of the Week: Dragon Tides.

This tactical minis game featuring Bruce and Brandon Lee (officially licensed) has players bringing a martial arts movie to life (tabletop life that is). If the campaign can hit a number of stretch goals, they’ve also worked to bring in characters from other board game universes. 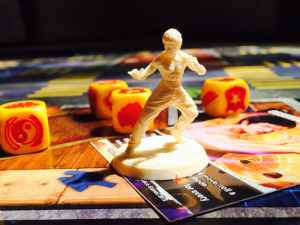 • Characters: Bruce Lee, Brandon Lee, Viktoria Jovavich, Luke Elba, and a cast of Henchmen, Mid-Bosses, and Bosses
• Non-Linear Storyline: Branching paths lead to very different scenarios and battles each time you play
• Change the course of the game: Let your decisions strengthen or weaken the Tiger Organization before the showdown with the final Boss
• Beautiful Minis that capture the Action/Martial Arts feel of the game Custom Dice combinations, unlocking Signature Moves for each character, specific for all heroes and bosses in the game
• Fast-Paced Combat and Interactive Environments in tribute to side-scrolling beat-em-ups and kung fu movies from yesterday and today

If the game plays half as good as it looks, I’m sold. If you’d like to become a backer, a $45 pledge will get you a copy of the game. But if you want the stretch goals and all the goodies, you’ll need to bump it up to a $100 pledge level. Dragon Tides is scheduled to be in backers hands in September of 2015 and you have until Wednesday, November 12th to become a backer. So head over today and give it a look.

Kickstarters of the Week: 3/9