We review Jabuka, a unique take on the word building game. Jabuka plays in real time and lets players build new words and even try and steal words from their opponents. 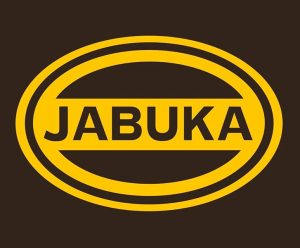 Ever stare at your scrabble rack wishing desperately that you could turn that N into a U to spell out the perfect word? With Jabuka, you can! Use the letter stamped coffee bean tokens to spell out words faster than your opponent or steal their words. It’s a twisted type of word game!

Jabuka is a word game for 2-8 players that plays in about 20 mins. Jabuka plays best with 5 players.

Play begins by each player taking two blank beans to use as wilds over the course of the game. The rest of the beans each have a letter on them, and to start the game they are spilled out of the bag. Some will be face up, some will be face down, but the game begins with the beans wherever they land.

There are no turns in Jabuka. Instead, players simply shout out words they can make and then grab the beans tiles necessary to make the word. If someone cannot see any more words they say “flip”. When everyone has said “flip”, each player flips over two random facedown tiles, and play resumes. This proceeds until the “Final Flip”—when the last tile is revealed—the next player to shout a word and form it ends the game immediately. Each bean in your words counts as one point, and whoever has the most points wins. Ties are resolved by taking ten random beans, then seeing who can make the longest word with what they drew.

Sounds simple, right? There are two major complications in Jabuka. The first is that most of the beans are “twistable”. The letters on them are deliberately written so that the way you turn the tile changes the letter. Is it a “t” or a “x”? Is it a “d” or a “p”? Is it a “w”, an “m”, or an “e”? That’s for you to decide in the moment.

It’s a twist that’s been thought of by anyone that’s played Scrabble or Boggle—why can’t my M be a W? Jabuka delivers that ability FINALLY in a word game, which gives this spelling game an additional shot of pandemonium. And while you’d think this would be a fantastic way to open up the word pool, you’ll find just how fast your brain depends on orientation to determine what a letter and then a word is.

The second complication is that you can steal other people’s words. If you can come up with a word that uses at least all of the beans in another player’s word (you can add more from either your wilds or faceup from the main pile), even if you have to twist the letters to do it, you steal the word from them. You can use this mechanic on yourself to make your words longer and more complex, scoring you more points if you can hold onto your words and, of course, complicating attempts to steal your words by making them longer and harder to lay claim to.

Players must be mindful of gathering letters—it’s very easy, especially in the heat of the moment, to accidentally fling beans across the table. And given the timed nature, you’ll be scattering beans hither and yon as you attempt to grab them from the table and each other.

The font may make it easier to flip some letters (W, M, E) but for folks with reading difficulties, it’ll be a struggle to pick out some letters. Additionally, because of their size, the max player counts may result in some players not being able to reach tiles or read them.

I do love that they’re made from recycled wood and come in a burlap sack. It’s not only thematic, it’s sustainable! And certainly, something this size doesn’t need a big box to sit on your game shelves.

Adding to other player’s words can occasionally be clever (creating compound words, using something small like “lend’ to become ‘blender’) but most of the time players wind up playing suffix shuffle. It doesn’t feel very clever. Also, the rules state that changing the letter applied in the blank bean could be used to change a word (you use it as R in ford, I declare it an O for food). This quickly devolved into some squabbles as it was easy to steal almost any word with a blank as a result.

It’s a cute idea that folks that have played word games for ages have dreamed of, but it’s missing a few things to be a cohesive game. Jabuka is cute and I love the lean towards small footprint and sustainability, but Jabuka is better suited as an educational tool than a hobby game.

Final Score: 2 Stars – Jabuka works fine as a spelling tool with a twist, but fans of other board games might be better served sticking to the classics.

Misses:
• Be prepared to pick up pieces from the floor
• Becomes more a lesson in spelling and vocabulary than actually a game