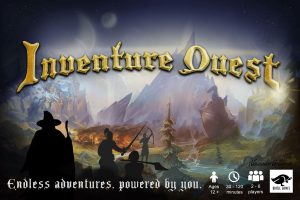 I’ve never been super into role playing games. But I’ve dabbled with them here and there. With the massive success of D&D 5e—thanks in no small part to online RPG shows like Critical Role and countless others—it feels like RPGs are more accessible and popular than ever. But my analytical brain isn’t always suited for storytelling. I certainly could never DM effectively. And my gaming hours are often spent calculating prices in economic euros.

So, cool intro… what does that have to do with Inventure Quest, which is what I’m here today to discuss? Well, in my estimation, it’s the training wheels for board gamers with RPG aspirations. DM-less but story-driven, but never leaves you hanging without something to help you progress the story.

In Inventure Quest, like most RPG campaigns, you’ll start by making a character (or picking one from those included with the game). There aren’t any stats to roll, however, you’ll just describe your character’s backstory and some of their traits, both positive and negative. From there, one character starts by trying to complete the game’s first challenge—uniting everyone to adventure together.

This challenge, like all challenges in the game, plays out through the action and object cards. You’ll make four pairs of these and they will determine the possible ways you can complete the challenge. You could get something like the action “give” and the object “coins”. That would make for a pretty easy story point of, “well, I paid you all to join me.” But some of the ideas will be more abstract things like the action “scout” and object “tree” where you might surmise that you’d try to convince the party to go check out an old magical tree that you believe exists somewhere.

The active player will choose the pair of cards they believe works best for the way their character would overcome the challenge. The others in the party will then vote, based on what they know, on which action/object was chosen. If they correctly vote for the right outcome, the challenge is successfully completed. If they do not, it fails. In either case, the active player will explain their story and how they tried to overcome the challenge and what led to its success (or its massive failure, as the case may be).

Then you’ll draw a new challenge card with an object card and the next player uses them as their prompt on the next task for the group. You’ll have pawns to track your successes and failures and if your success pawn reaches the end of the track before your failures, you win!

Inventure Quest is basically an open-ended storytelling game with a voting system similar to Dixit or Mysterium. The game really relies on your characters being well developed and thoroughly explained as you are counting on your adventuring party knowing how you would approach the challenge, given the possible actions available to you.

I appreciate that Inventure Quest never leaves you completely on your own to create the next story beat. The challenges are developed based on a prompt from cards. The potential solutions are prompted by cards as well. You are free to expand and be as creative as you want, but you always have inspiration of some kind to draw from.

You can even adjust the difficulty as you can add in a fifth pair of action/objects to vote on for each challenge and change the initial setup of the success and failure pawns, giving you less room for error.

Each game is entirely self-contained, so if you are looking for a campaign, this isn’t a system that lends itself to that. Although I suppose you could keep the same characters from game and game and nothing will stop you from continuing the same story, there isn’t really any progression to speak of. Since you don’t have any stats there isn’t a way to level up or anything. It’s pure storytelling.

If the thought of hundreds of pages of rules and campaign guides gives you a bit of pause in trying out roleplaying games, Inventure Quest might be the best option to get your feet wet. Or maybe your group is interested but no one has the time to invest in DM’ing a campaign. Perhaps you are like me and just don’t have the creative juices to keep a story alive without some prompting.

The game trades out a lot of these complications for a quick to play and easy to learn game that will give you the opportunity to go adventuring with your friends.

Inventure Quest launches today onto Kickstarter. If you’d like to become a backer, or find out more information, head over to their campaign page for a look.