We review Holding On: The Troubled Life of Billy Kerr, a story driven, cooperative board game published by Hub Games. In Holding On, players are trying to save the life of Billy, all while trying to find out his story. 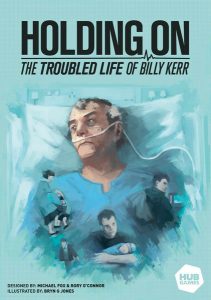 At Origins 2018 I had the opportunity to sit down and play through the first scenario of Holding On: The Troubled Life of Billy Kerr. I was enthralled with the game. Players take the role of nursing staff trying to provide both medical and palliative care their new patient, Billy. Holding On quickly rose to the top of my anticipated list as I was drawn into the story and love the idea of board games exploring more interesting and thought-provoking themes that have traditionally been left to other media.

Holding On is a cooperative resource management and campaign style game for 2-4 players. It plays best with 3 players and each scenario will take about an hour.

Holding On: The Troubled Life of Billy Kerr is a campaign style game which plays out over ten scenarios. In each scenario, players are acting as the nursing staff balancing their time between keeping Billy alive and trying to piece together clues from his past to understand his life. There are two distinct parts to Holding On—the narrative and the mechanical.

We will start with the one that is less interesting. Mechanically, Holding On is a pretty basic cooperative game. Each day in the hospital, player’s will have to assign themselves and their assistants to three different shifts—morning, afternoon, and evening. Throughout the game you’ll be able to easily acquire partial memories, but you’ll have to use your resources and a little luck to get Billy to really explain the context of the memories you are seeing. One player can cover multiple shifts, but will take stress in doing so, eventually limiting their ability to come to work at all.

By providing care to Billy, you’ll earn “care tokens” which can be used for additional medical treatment or to inquire with Billy about his past memories. The inquire action is the key to winning most scenarios, as you’ll pick a timeline you have a partial memory for and hope to draw a random clear memory from the same timeline.

Each scenario will have a different goal, but nearly always focus on some combination of finding clear memories while keeping Billy alive. Complete the scenario and you’ll get an additional piece of Billy’s story and move onto the next chapter. Fail and you’ll be asked to retry that scenario before moving forward.

Narratively, Holding On takes board game campaign-style games in a previously unexplored place. This isn’t a game about saving the world from disease, defeating crazy monsters, or gathering resources in the Italian countryside. It is much more human than that. There is a man in your care that you know nothing about who seemingly has no one who cares about him. He’s lived a long and interesting life and putting the pieces of his past together so he can move on peacefully is a weighty theme that is exciting for a board game to try to tackle.

If you disconnect Holding On from its theme and it’s storytelling, you are going to really not enjoy the experience. The game itself is serviceable, but you’ll find each scenario leads to quite a bit of repetition, and occasionally, frustration.

In the context of trying to have a conversation with an elderly and dying man, this makes sense. Conversations won’t necessarily flow logically. You’ll revisit topics you’ve already heard about over and over again. Getting past that to the new information can be a struggle. As a fact of life, it’s apropos. As a game mechanism, does it make the experience fun? Not really. If you are hoping to find a clear memory to match a partial one you’ve discovered, you’ll have a 1-in-7 chance based on the number of memories in each timeline. Action cards can further get in the way and mess that up as well. The result is the scenarios, and Billy, will live and die by something completely outside of the control of the players.

This makes Holding On a very difficult game to review. It isn’t fun, necessarily. As a would-be board game purchaser, I can only assume you are looking for a game that will be fun to play. But fun isn’t the only metric we should use to judge games, especially this one.

As a thought-provoking exploration of life, death, and regret, Holding On asks more of its players. The game experience is really what you make of it. As you succeed in scenarios, find more clear memories, and piece together Billy’s life, you and your fellow players will be able to discuss more than just the luck that swung the game in your direction. Holding On is most enjoyable when you dive into the narrative and then discuss the broader context with other players. Unfortunately, the story really only gets told between scenarios. The gameplay itself has a few quotes from Billy, but those are essentially the same throughout the entire campaign.

While I can excuse a lot of what Holding On does wrong in terms of luck and repetitiveness, there is one problem that does nearly ruin the entire experience. If you fail a scenario, you get nothing. No progression, no bits of story, no changes to the game state. Billy died on your watch and you must reload from your last save. It pulls players completely out of the narrative. And that frustration inducing game you just had that didn’t go your way… you must do it all over again. Holding On is a tough game to get through because the losses give you nothing. I would much preferred a way for the story to progress, win or lose, each time.

Holding On: The Troubled Life of Billy Kerr is a wonderful pushing of the proverbial envelope. The idea of board games as something other than fun is often only discussed in terms of historical recreations. The possibility of a board game acting as an interactive piece of fiction that discusses larger themes is an exciting one.

For me, the ultimate execution was just a little bit off. The gameplay itself isn’t particularly interesting and the story is slow to unfold itself. This is exacerbated by the fact that when a scenario is failed you must repeat it continually until you succeed. When the story and the narrative in Holding On is the only thing that will keep players’ interests there needs to be more material and it needs to be explored not just between scenarios but as part of gameplay as well.

Final Score: 3 Stars – Lots of great ideas and barely good-enough mechanisms that just become too much of a slog to want to push through.

Hits:
• A unique attempt at integrating real-life themes with gameplay.
• Most of the gameplay aspects can be explained and fit with the theme.

Misses:
• Story largely told between gameplay.
• Must restart without any progression if you lose a scenario.
• Game mechanics are very luck driven.