We review Head Hackers, published by Big Potato Games. Head Hackers is a team based party game where players are trying to be the most clever as they write out clues to the secret word. 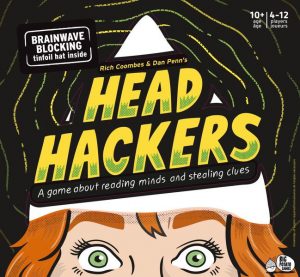 I don’t review party games very often here on BGQ. It’s not something my weekly gaming group gravitates to, but party games are nice to have when you are with a large group of people. So I still like to keep my eyes open for one that might work when the mood strikes.

Recently Big Potato Games (Blockbuster, The Chameleon) sent a copy of Head Hackers for us to check out. The large tinfoil hat looked ridiculously stupid, of course, my interest was immediately piqued. So prepare your brain wave blocking device of choice as we set our sights on Head Hackers, a secret word party game for 4-12 players.

In head hackers, players split up into an even number of teams of two. The goal in the game is to earn enough points to get your piece around the board. Each round, one team will be the active team, with one player on the team being the reader, and the other the guesser.

When it’s your team’s turn to be active, the writer puts on the tinfoil hat and the guesser closes their eyes. The writer then draws a card and rolls a colored die which chooses the word on the card they must use. The writer then shows the card to everyone but the guesser and writes down three clues for the secret word (with the usual word game rules you’d expect). Each other team does the same.

The writer then reads the three clues to the guesser who gets one shot at guessing the secret word. If correct, the team scores two points. Each clue that other teams guessed of the writer earns that team 1 point, while each clue they failed to hack earns the writer’s team 1 point. Then the hat is passed to the next team and play continues until one team makes it back to their home space.

So let’s talk about this tin foil hat. This is one of those things that you need to know if your group will tolerate or not. It borders on Happy Salmon’s level of silliness (although not that cool), and while it’s not really needed in the game, it can be quite humorous seeing it in action (I’m going to assume that everyone at your table uses proper scalpal hygiene, so hopefully there won’t be any issues there).

For the gameplay… eh, it’s fine I guess. It’s nothing groundbreaking that you haven’t seen before. In most of our games, other teams would routinely hack at least one word, if not two. Points stayed fairly close until one team starts getting so obscure that the guesser fails to figure it out and they fall behind. The words are all generic and this game feels wholly overproduced for what it is as most components are completely unnecessary. The hat, the game board, and even the die… you could play this game by randomly pointing at a word in the dictionary and having every one type three words out on their phone’s notepad.

Other than that, there isn’t really much to say about Head Hackers. It feels like a mass-market game (and not in a good way… if there is one) that is fun for a few moments but otherwise forgettable. I’d also suggest playing with at least 6 people, as two teams of two can quickly turn into a zero-sum game and get stale pretty quickly.

Every now and then there is a party game that comes out of nowhere and surprises people with its cleverness and fun. One Night Ultimate Werewolf, Codenames, Just One, and Letter Jam just to name a few. Head Hackers is unfortunately not one of those games. This is a game you’d expect to find on the shelf at Walmart or Target next to Pictionary, Uno, and Scattergories. That’s not saying it’s a bad game, but it’s also not going to excite anyone who has been playing modern board games for more than 10 minutes. But hey, at least you can use the tinfoil hate to protect your brain from your electromagnetic hypersensitivity condition… right Chuck?

Final Score: 2 Stars – The game plays fine, but there is nothing revolutionary here that’s going to have you excited to get it back to the table.

Misses:
• Nothing unique or interesting about the gameplay
• Most components are fairly unnecessary
• Needs at least 6 players to be fun