We review Hammer Time, a dexterity game published by HABA Games. In Hammer Time, players are banging on the side of the box trying to knock specific colored gems off it. 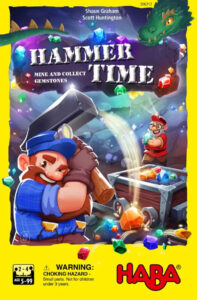 When it comes to games for kids and families, HABA is pretty much the leader in the market. And one look at Hammer Time will tell you why. Bright colored gems, quick easy to learn gameplay, and you get to hit stuff with a hammer. What kid isn’t going to love that?

So is there more going on here than just whacking at cardboard? Of course. Is it going to keep your kid’s interest and still be fun for you to play? Well, I can’t spoil the ending yet… read on!

Playing Hammer Time couldn’t be more simple. Before your first game, there is a neoprene sticker of sorts you stick to the bottom of the box. Then you flip the box on the table and dump all the gems on the bottom. Each player gets a set of four wagon cards and shuffled them and flips the top one face up.

On each turn, you’ll take the hammer and hit the box however you’d like until at least one gem falls off. If 8 or less gems fell off the box, you are in luck! You managed to extract some gems without waking the dragon and you can add them to your wagon. If more than that fall off, the dragon scares you away and you put all gems back on the box.

Now you may not be able to use every gem that falls off. Your wagon card will require certain colored gems and if you have things that your current wagon doesn’t require they go back on the box. There are also clear gems that can substitute for any color.

You must also keep an eye on task cards which give you a bonus clear gem if you manage to fulfill its goal. These include things like collecting an even number of gems, 6-8 gems, or exactly two black gems (which are otherwise useless).

As soon as one player has filled their fourth wagon the game ends when all players have had the same number of turns. Whoever filled all their wagons wins and if multiple players have the most task cards acts as a tiebreaker.

I mean, let’s be real… hitting things with a hammer is fun. Hammer Time, luckily for its box, incentivizes you to swing at least somewhat carefully. And it’s quite a good time.

Each turn takes a pretty similar tract. Look at which color of gems you need, try to find an area of the box where those colors are close to the end, and start swinging.

Heavy on strategy this isn’t. But if you are a parent who is looking for something educational in your kids games I’d actually argue there is a lot to learn here. Let’s say there is a blue gem you need right by the edge… do you hit next to the gem? On the opposite side? How hard? What if you try to tap the box with the pointy-er side of the hammer? Heck, Hammer Time could be a high school level demonstration of inertia. (Maybe not, but it’s not far off.)

The task cards are the biggest miss for me. They actually play an important role on the turns where you maybe only need one more gem to complete a wagon. If you get the gem you need all the extras go back, even if they could be used on the next wagon. But you can hold onto the task cards until you need them. It just felt a little more random and trying to aim for things like odd or even seemed like a crapshoot, although admittedly help increase the educational value of the game.

There is an optional rule to roll a die before your turn that gives you some disadvantage. Maybe you have to hit with the handle of the hammer or swing with your eyes closed. This can be a bit more chaotic but adds a little bit more fun after you’ve got the base game down. I do wish there was some reminder other than the rulebook of what each result of the die means. The art on the side of the box supposedly clues you in to what you have to do but it’s not entirely clear on your first few plays with the die added.

For my son in particular, Hammer Time was… a hit. With a hammer… get it? Anyway, he really enjoyed it. And I enjoyed it. And in the end, I felt like he actually used his brain and didn’t really feel like he was learning. Using the die was a fun alternative and we often played a few games back to back and added what we called the “hard mode” die for our final game of the evening.

The fact you can set it up and play in about 10 minutes makes it perfect to keep around in the collection. And it doesn’t feel like the type of game most kids will grow out of very quickly because hitting stuff with a hammer is always fun—even in your 30s.

Final Score: 4 Stars – Who doesn’t like hitting things with a hammer? And you might learn something about Newton’s first law accidentally.

Hits:
• Colorful gems and a hammer makes it easy to get your kids excited to play.
• Die adds a new challenge once you’ve played a few times.
• Sneaky bit of practical science is happening here.

Misses:
• Task cards were good for the educational aspect at times but felt too random to specifically try for.
• Wish there was a good reminder card for the die results.