We review Gut Check, an educational board game that seeks to inform players on how microbes work in their body. With some take-that mechanics, Gut Check is a game that will appeal to players who love interaction and attacking their opponents. 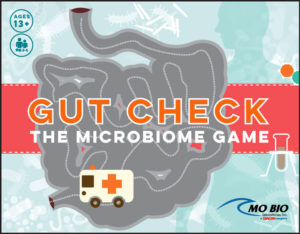 Here at Board Game Quest, we’re all about hard-hitting tough reviews that expose gamers to every niche boardgames have to offer. We vigorously crawl the innards of board gaming sites to find those games which deserve your attention. Just kidding, this reviewer came across a mention of this game in an academic paper and curiosity piqued.

This is a game about players managing their colon, hoping to have the healthiest microbiome this side of the duodenum. Yes, players are literally playing cards to increase their count of microbes while playing unhealthy microbes and antibiotics on their opponents. Along the way, the game’s primary purpose is to teach players about these concepts and what they should be doing to keep their gut healthy.

The rules for Gut Check are pretty straightforward. Each turn, players can take a few different actions based on the cards in their hand and what they have on their player board. The player board shows which healthy and unhealthy microbes, also known as pathogens, they have. Additionally, if a player has any infections, these cards live here. The main board mostly serves as a score track and organizer for cards.

The main action that players will want to accomplish is playing Microbe cards. Microbes that allow the digestion of wheat, milk, or veggies are called “Beneficial” microbes. These will earn the player positive Health points whenever a “Gut Check” card is drawn. Pathogens, as expected, give negative points.

In addition, there are Event cards that players can use to boost their points or drag other players down. Playing an antibiotic on someone will kill all their harmful microbes, but also take out half their beneficial microbes. There’s a basic level of strategy that players should understand that is directly linked to learning how the various microbes work in the human biome.

Other actions provide some twists to enhance the strategic experience. Players may have to deal with Infections which deliver more ongoing penalties until a player resolves the steps needed to remove the card. It’s also possible to cycle through the card choices laid out on the main board.

At the end of a turn, a player draws back up to five cards in hand. When the deck runs out or a player reaches 50 Health, the game ends. Either the player with the most points or the first player to gain 50 Health is the winner.

Generally, people who buy a board game are doing so to add that particular game to their collection for long-term future play. Gut Check is a game designed with a particular customer base already in mind, patients who need help managing their intestinal health immediately after a diagnosis. The designer is also a researcher interested in seeing if a board game could be designed that would accomplish this while at the same time being a game that people would play for fun as well. The degree to which this is successful is highly dependent on what players enjoy in a board game.

First off, the main issue that can be seen is that microbes don’t just sit still. The human biome is very often a battleground of tiny things trying to stay alive against an onslaught of negative events. Players certainly have the opportunity to play positive events, but the impact of these is minor compared to giving someone else an infection or destroying half their microbes with an antibiotic.

The above results in a game which is very chaotic and full of take-that moments. This is the play style which benefits from beer and pretzels (word is still out on these added as an expansion). With the right crowd, this can be fun, but, again, with attack-averse players, a big negative.

The other issue is that the game has a mechanism by which only certain negative events can be resolved by specific cards. Players may have to go card hunting, which is the equivalent of lost turns. This can also turn off players to a large degree.

Finally, the other complaint, which is easily rectified with a house rule, is that the Gut Check scoring cards are not spaced out evenly. To the game’s huge detriment, a random shuffle could move all of these to be drawn early game, which ruins the whole experience.

So, if players can handle the above issues, mostly the game is light and fun, with moments for humor as cards both try to educate and tease players. What happens in the human large intestine is not always pretty, and the game recognizes that just as it tries to educate. Given the level of reading on the cards and the interest of helping players make good choices for themselves, the 13+ age range on the box is appropriate.

Gut Check is far from a great game. Overall it can be random and mean, but on the flip side, it feels like that’s the point with the hope that players learn about the human biome and how individual choices affect it. Gut Check definitely succeeds in that respect, but it just barely keeps pace with some other take-that style card games.

Final Score: 3 Stars – While Gut Check works as an educational tool for learning about all the different kinds of bacteria that live inside us, it’s a rather average, if somewhat enjoyable only once, kind of game.

Misses:
• Very random
• Gut Checks are not spaced out
• Some over-punishing cards