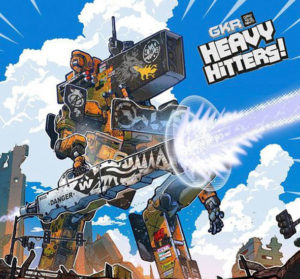 When a game gets published called Giant Killer Robots, my silly inner child sits up and takes notice. And when I find out that it’s published by Weta Workshop, the special effects house behind movies such as Lord of the Rings, District 9, and Blade Runner: 2049, the component addict in me begins to drool. GKR: Heavy Hitters is a game about mega corporations using massive robots to fight for lucrative salvage rights and advertising dominance in Earth’s abandoned cities. Theme. Check. Components. Check. Gameplay? Let’s find out.

GKR Heavy Hitters is a skirmish game for 2-4 players that takes about 60-120 minutes to play. The game plays best with 2 or 4 players.

Each player in GKR: Heavy Hitters controls a giant robot and 3 drones (combat, repair, and recon). Before the game, each player will build a deck of 25 cards consisting of primary and secondary weapons, deploy, movement, reaction, and orbital strike cards. Players also get to choose a unique pilot card that will grant them a special ability.

Players battle on a board filled with 3D buildings and a round in GKR: Heavy Hitters takes place over 5 phases:

1. Deploy – Players can deploy their support drones for 4 energy (a heavy hitter gets 5 energy to spend in a turn) or 2 energy if they have a deploy card.
2. Movement – Heavy hitters can move 1 hex per point of energy spent, while drones can move their movement speed at no cost.
3. Combat – Each player selects the weapon cards from their hand that they want to fire. Each weapon has an energy cost, range, and damage value (and sometimes special abilities). Once each player is ready, cards are revealed and each heavy hitter weapon and drone are resolved according to their weapon speed value (highest to lowest).

Attacks are handled via die rolls. The attacker rolls 2 dice and needs a 5 to hit a heavy hitter or a 7 to hit a drone (with modifications for facing or cover). If a hit is scored, the defender rolls a die for each point of damage the weapon inflicts, with each 6 rolled avoiding a point of damage.

Drones can take up to 3 points of damage, depending on the type, and can be redeployed in future rounds if destroyed. For each point of damage a heavy hitter suffers, the owner takes a card from their hand or draw deck and places it in the damage pile. If a heavy hitter ever runs out of cards, they are destroyed.

4. Tagging – Each heavy hitter or drone next to a building can tag it with a marker. If a building has 4 tags from one player, it’s destroyed. Players then draw one sponsor card per tag placed.

The game ends when either one player has destroyed 4 buildings (and wins) or when one heavy hitter is destroyed. The winner is then the player with the most undamaged cards and achievement spaces earned (if playing with more than 2 players).

There is no question that the components in GKR: Heavy Hitters look phenomenal. The four giant heavy hitters tower above the game board and are fully painted. The player drones, while not really painted, still look good and each have their own unique sculpture. Even the artwork, which has a cel shading type of look, fits perfectly with the game and is very well done. So yes, the bits and pieces look amazing and I expected no less from Weta Workshop on that front. It’s probably what will first draw most people to the game.

For the actual gameplay, I’d tag GKR: Heavy Hitters as a light, almost entry level, skirmish game. The rules are smooth and easy to learn, and I found the rulebook to be fairly intuitive. The only time the rules get a little clunky is when forming the battle line, having to sort each card every round by its weapon speed. Although we usually just call out numbers and fire weapons that way, which seems to work fine.

At it’s heart, GKR: Heavy Hitters could almost be considered a game of energy management. Players only get 5 energy points a round (although you can go negative and take damage for it), and those points will go by very quickly. Everything you want to do costs energy. This means that unlike most skirmish games, there won’t be much jockeying for position with the heavy hitters. Usually they will get into place early on, and then use their energy to blast the bits out of their opponents (or deploy drones), only moving a little bit to line up shots.

I really enjoyed the variety in GKR: Heavy Hitters. Each heavy hitter has their own deck and all the weapons are different. This gives the game some nice replay value, as players will want to try out different combinations of primary and secondary weapons for each of the heavy hitters. Add this to the stack of diverse pilot cards and you have a game that you can play quite and still be trying out new combos.

However not all is roses with GKR. One issue I had was with the sponsorship cards. While I liked the chaotic nature of them and how they can change up the game play, I felt like they were a bit too easy to earn. Most rounds you will be tagging 2-4 buildings and drawing 3+ cards every round feels unnecessary (as you have a hand limit of 5). We were churning through them fairly rapidly and half the time I was dumping them or just playing them to get them out of my hand. Personally I would have much rather they come out a bit more slowly, especially because some can be quite powerful.

Finally, when it comes to player scaling, I’d only recommend GKR: Heavy Hitters with 2 OR 4 players. The game falls into the same trap as many others with three players. Two players will end up pummeling each other while the third sits around and tagging buildings, or, two players will gang up on the third until they are out of the contest. The game could have really used a 3 player balancing mechanic, something like found in the new edition of Neuroshima Hex. However, I was glad the game ended when one robot was killed, as it avoids player elimination issues.

Overall I think GKR: Heavy Hitters is a great offering from Weta Workshop. The components are beautiful and really make playing the game a lot of fun. For the gameplay itself, it’s a solid ruleset that while not perfect, still works well for a skirmish game. Once players get a feel for the ruleset, turns should go by fairly quickly (and with lots of carnage).

I think GKR: Heavy Hitters is a great choice for players looking to get into the skirmish genre, but are intimidated by having to assemble and paint armies of miniatures. Everything looks amazing, the rules are easy to pick up, and there is a lot of variety in the box. However I’d recommend only playing this one with an even amount of players.

Final Score: 4 Stars – A great, light skirmish game that will look amazing on your tabletop.