We review Ghoul Island – Act I: Voyage to Farzeen, the first act of a four part set of Mythos-inspired DnD 5e campaign. An excellent, well written and organized adventure for 1st level players. 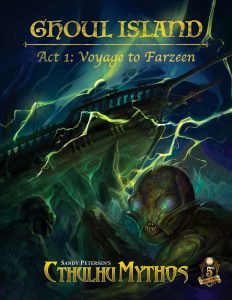 It was almost a year ago when Petersen Games launched their Kickstarter for Sandy Petersen’s Cthulhu Mythos for 5e (SPCM). This highly anticipated merging of Call of Cthulhu and Dungeons and Dragons 5e was a much-needed compendium combing these two RPG systems. I was lucky enough to do the SPCM review in the early part of 2019 and I loved it.

This brings us to the follow-up of Petersen Games SPCM and their Kickstarter launching on September 9, Ghoul Island – Act I: Voyage to Farzeen. (Ghoul Island). This stand-alone campaign adventure is the first of four installments for fans looking for a module set that incorporates the SPCM in adventure form.

Ghoul Island allows DMs and players to run or play in a mythos inspired campaign. I’ll highlight what’s included (trying not to give away too many spoilers), what I like, and my final thoughts on the overall Ghoul Island book.

As I noted above, Ghoul Island is the 1st campaign adventure of a set of four. What readers should know is that Ghoul Island will launch as a Kickstarter on September 9, 2019, but the remaining 3 remaining adventure books will be released direct to retail. Readers should also know (and like) is that the Ghoul Island is printing as of today and will deliver to backers in October 2019. The 3 remaining adventures will release one each about a month after October. So, by January 2020, all adventure books will be available to purchase and play. I don’t know about you, but I love the fact that there will be no long wait to get the first or to have all the parts in your hands and to your table.

The intro focuses on how to use the book and incorporating the Mythos into this 5e campaign setting. The one big thing to note is that you do not need the SPCM to use all Ghoul Island adventures—there will be rules included as well as select monsters, NPCs, items, and rules for dread so it’s a stand-alone set. But there will be many references to the SPCM which will help DMs and players make the most of Ghoul Island.

The intro also goes into further detail of a Greater One that is found in the SPCM and part of Ghoul Island. Plus, it gives excellent detail as to what a Mythos ghoul is and how it differs from the classic DnD ghoul. These are vital for DM and players to understand because these elements are key pieces to all the Ghoul Island adventures.

Lastly, the intro gives a high-level synopsis of what to expect in each act of Ghoul Island. It’s an adventure designed for characters starting at level 1, and at the end of this act, they should be level 5 in preparation for Act II coming in November. The level progression by act starts and ends as follows: Act II: level 5 through 7, Act III: level 8 through 10, and Act IV: 11 through 14.

Now, you might be thinking that’s a huge level jump but Ghoul Island has been designed around milestone leveling for players. This means that each chapter of Ghoul Island Acts I-IV are designed to be one session and at the end of each session players should progress to the next level. DMs are welcome to run Ghoul Island based on XP but will need to add more encounters and challenges for players to level up. Some DnD 5e rule purists may not like milestone leveling because of the rapid leveling, but for those with limited gaming time or wanting to see a campaign through to the end may not mind at all.

Act I: Voyage to Farzeen

I’m not going to give you a blow by blow of each chapter of Act I but let me hit some non-spoiler points that won’t give too much away to DMs or players. Each Act is broken into chapters and each chapter is further broken down into several different scenes giving the DM a nice outline to follow. All levels of Ghoul Island have excellent level of detail for the DM and are very well-organized.

The two big points that I think DMs will love who run Ghoul Island are the following: great plot hooks and variable options at the scene and chapter level. Now, any DM or player who has played a published campaign set have sometimes blindly followed the printed plot hooks because what else are players to do even if they are not very believable. Well, Ghoul Island provides some not only believable but logical plot hooks that do not make bad leaps to the next scene and chapter. All are well thought out, well written, and make sense as part of the larger story.

The other details that should also appeal to DMs are the variable options if the players take a certain path or depending on the outcome of encounters or challenges. Many adventure modules assume a specific path or outcome and it pigeon-holes DMs and players to take that path no matter what. Within most scenes of Ghoul Island there are possible options that might occur and divergent paths that can be taken. Of course, each will have a conclusion that will take the party to the next scene or chapter but again, it’s not a set or fixed path to get there. Players and DMs should like this level of flexibility.

DMs will find highly detailed information on the NPCs, monsters, and items found within Ghoul Island. There’s plenty of great background information and NPC motivations that should help any narrative elements, or what might be shared or not during PC interactions. There are also specific monster encounter stats and backgrounds that are not found in the SPCM and that are Ghoul Island specific. Lastly, are items of interest that PCs might encounter or find while adventuring above and below Farzeen. All the information listed in the appendix makes Ghoul Island a stand-alone adventure.

I’m sure most readers will not be shocked that I can’t wait to have my DnD group play Ghoul Island – Act I: Voyage to Farzeen. I hope most readers are relieved that they don’t need to wait long to get their backer copy of Ghoul Island and that Acts II-IV will soon be hitting retailers this fall and winter.

I do own the SPCM but I like that it’s not a must-have to run Ghoul Island. This is a standalone campaign set but having the SPCM will make the most of it. As a DM I like the excellent plot hooks and flexible options that Ghoul Island offers. Some 5e rule purists might not like that Ghoul Island was designed around milestone leveling but DMs can offset with additional encounters and challenges if they prefer XP base rewards.

If you’d like to get a soft or hardcopy, Ghoul Island – Act I: Voyage to Farzeen pledges are available starting at $15.

Hits:
• Quick to backers and to retail
• SPCM is not required to use
• Well-written plot hooks
• Flexible adventure options

Disclosure: An employee for Petersen Games also writes for Board Game Quest. He did not influence the opinions expressed in this review.