We review the game of negotiation and area control Fief: France 1429, published by Academy Games. In Fief, players are working to become the new King of France through a combination of area control and back room deals. 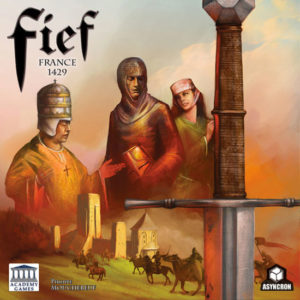 Have you ever wanted to be the King of France or just a Duke, Countess, or Baroness? Maybe your ambitions lie in the Church and you want to become the Pope? Fief: France 1429 gives you all of these options and more.

Fief is an area control game where players will fight for territory throughout 15th century France. Elections will be held for positions of power and players can make deals to try creating the most powerful new dynasty in France.

In Fief: France 1429 players control noble families attempting to garner ecclesiastical titles and political influence. You can exert this influence by building massive armies or partaking in some cunning diplomacy. Various titles will award you victory points and if you have 3 victory points at the end of the turn, you win. You can also share the victory with an ally, but you’ll need 4 VPs between you…and you’ll have to be married.

The components in Fief: France 1429 consist of the game board, some mini-sized cards, and a lot of cardboard tokens. There are cardboard pieces with unique art and plastic standees for each Lord card in the game. All of troops are also cardboard tokens in each of the 6 available player colors.

While the cardboard pieces are serviceable, if not spectacular, I have a real problem with the game board itself. The board separates France into various fiefdoms based on the color of the map in that particular area. However, there are also bishoprics that are delineated by thick lines on the map that cross over multiple fiefdoms. This is essential to the gameplay but makes for quite a busy looking board.

The real problem here is the colors they chose to use. The green fiefdom is right next to the dark blue one. It’s hard to tell what village falls exactly where. The lines for bishoprics are drawn in similarly dark and muted colors. You really have to spend a lot of energy making sure you know exactly what fiefdom and bishopric each village is in, because the board is just a mess.

Each turn in Fief consists of seven phases. In the first phase, you are given the opportunity to have a quick wedding and announce the marriage of one of your Lords or Ladies to that of another player. Once married, that player becomes your ally and it’s very difficult to get out of a marriage.

The rest of phase 1 consists of elections of various offices. When certain conditions are met, you will elect bishops, cardinals, the Pope, and the King of France. You only get to vote in the election if you meet the requirements, and you may get more votes than other families depending on your influence thus far.

Next, players can discard any cards they wish to and draw up to 2 cards. There are two separate decks: the fortune deck and the lords deck. Lords deck generally gives you a new lord or lady to add to your noble family. The fortune deck cards give you special abilities that can help you earn money or succeed in battle. Some of these cards can only be played during this phase, but some are events that you can play any time throughout the turn.

After all players have chosen to play cards, they earn income. You earn 1 coin for each village you control and 2 coins for every mill in that city. If you’ve been fortunate enough to play a tax card you can also collect tallage from villages in fiefdoms you control or tithe from bishoprics under your influence. Then, players have the opportunity to purchase additional troops, mills, strongholds, or fief lord titles.

Lords can then move troops around the map. Troops can never move without a lord commanding them, but you can pick up and drop off troops around the board. You need permission to move through a village controlled by another player or you can wait outside their village and then start a battle. The battles feel a little bit like Risk. You calculate your strength based on the number of troops you have and both players roll and kill off some folks.

If, at the seventh phase of the turn, you have three victory points, you will in the game. You can enter a marriage and you and your ally will need a total of four victory points to win. There are basically three ways to earn a victory points:

First off, I love what Fief: France 1429 promises. It’s a game on a grand scale where you can gain influence, either through the Church or the monarchy. There are a ton of small rules that make the game’s theme really come through. If the King gets married, his wife becomes Queen. If that family adds a new male lord, then that lord becomes the Crown Prince and the future King if he somehow gets killed off. Cardinals can tithe ungoverned bishoprics. The Pope can tithe all of France. Want a divorce? You can ask the Pope for an annulment, or you can try to kill your spouse. Fief gets all of these details right and it really makes the game a thematically great time.

Unfortunately, it seems like any of the game’s big moments just don’t have the impact and suspense they should. Almost all of the elections are a foregone conclusion when they are held. One player often controls the majority of the votes and can unilaterally choose the bishop, Pope, or King. This happens a little less as you increase the player count, so I recommend never playing with less than 5 if you can help it.

At its heart, the game is basically an area control game, and the mills you control are the most important asset you have. They provide income that can be very hard to come by, but the game limits the number of mills that can be built. It seems that to be successful, you should always be building mills until they just no longer exist. Players can also attack your villages and pillage your mills.

The combat, as noted before, plays out a bit like Risk. You can fortify yourself in a stronghold or fortified city and slow down your attackers. However, as they put your city under siege, their penalty for attacking your fortified position diminishes. If you kill all of the enemy troops and you have additional hits rolled, you will also kill opposing lords. If not, you will take those unprotected lords captive and hold them for ransom later. This felt a little strange that you couldn’t simply choose to kill off the opposing lords if you wanted, but I suppose in the name of nobility this was the way it has to be.

The combat, in addition to the fortune cards, add a lot of randomness to how a game of Fief plays out. Some of the fortune cards are disasters that prevent you from moving through a bishopric or famine that causes your mills to not produce. If you are lucky enough to draw a taxation card, you can get a huge boost in income that will leave your opponents in the dust.

Alliances and negotiation can play as much or as little as part of Fief as you want them to. Formal alliances can make it slightly easier to win, but require a marriage and aren’t easy to get out of. You can ask for money or cards or make any kind of backroom deals you’d like throughout the game, even without marrying off a member of your family. The downside is this can lead to some king-making in the game. It’s way too easy for a player to be in a position where they cannot win but clearly get to make the choice who will win like electing another Lord as King.

The game box shows the play time as 2+ hours and it’s incredibly accurate. With some lucky rolls, draws and a couple well negotiated deals, you may be able to pull off a victory in a couple of hours or even less. However, the game can also reach a point where there is just a giant stalemate and troops continue to battle, die off, and get purchased again without much changing hands. And that can really drag some of those games out.

Fief: France 1429 is an interesting game to play, but it clearly isn’t a strategy game. At its best, it’s a fierce negotiation game with some random elements. At its worst, the game turns into a slog of combat and dice-rolling and stalemates.

Fief: France 1429 has a lot to offer with its theme and if you have a group that loves to negotiate I wouldn’t hesitate to give it a try with 5 or 6 players.

Final Score: 2.5 Stars – Fief has some interesting elements going for it, however it’s held back by its randomness and length.

Hits:
• Thematic elements bring the game to life.
• Gives a lot of room to negotiate and make alliances

Misses:
• Too much random for a long game
• Board art is hard to decipher
• Very hard to play with less than 5