I recently had a chance to chat with legendary game designer Eric Lang. I reached out to him during his highly successfully Kaosball Kickstarter campaign that has since funded (hitting an amazing 1427% of its goal). Eric has been the brains behind some incredibly successful and fun games over the past 15 years. His bio includes games such as: Chaos in the Old World, Quarriors, Warhammer: Invasion and A Game of Thrones.

Eric has been incredibly busy lately with Kickstarter, game design and jet-setting around the globe, but he was kind enough to take some time to answer a few questions about being a designing board games. I would have loved to ask him a ton more questions and really pick his brain, but since I knew how busy he was, I limited myself to just 12 questions. I hope you enjoy his answers as much as I did.

BGQ: We’ll start with the obvious question most people probably want to know about. Can you walk us through how you design a game. How do you start, what is your process?

Eric: The full answer could easily fill a book, and one that isn’t nearly finished. In short, I try not to repeat formula from game to game.

Generally I spend a lot of time absorbing a lot of knowledge and associate with smart people. After that, I go with my gut and see what happens. The only times I get bored is if the design process starts to feel like a checklist. If I’m not taking chances, I’m not particularly interested.

I find that once you’ve been doing this long enough, you internalize the basics good design, and game balance (however necessary) comes with time if your team is good enough. The hard and necessarily stressful part comes in choosing which of a dozen correct solutions to apply to your game in any stage, be it initial brainstorm, concept refinement, or playtesting. 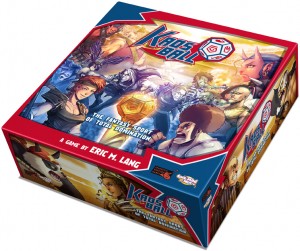 BGQ: Do you follow the design philosophy of starting with a theme and building game mechanics around it or do you find it better to think of some great mechanics and find a theme to fit?

Eric: Depends on the game, but most often I am inspired first by theme or metaphor. Lately I have taken to designing entire intellectual properties (like Kaosball) with the central idea that they would be a game.

I rarely design a game simply because of a mechanic, and even the games that start that way often end up losing that very mechanic.

BGQ: While you’ve designed a number of amazing games, I’m guessing they don’t all make it to our tabletop. What is your ratio of games you’ve started designing to finished games that have hit the retail market? Can you tells us about one game you started designed that just didn’t make it?

Eric: I’ve designed what I call “the easy 80%” (or “up to the first prototype”) of literally hundreds of games. Often I will build a prototype just to explore an idea, and then throw the prototype away without playing it, knowing it will be mediocre at best. I also throw away games that playtesters don’t get particularly attached to. If people don’t come back to me asking to play a game without prompting, I know it’s probably nothing special and doesn’t deserve to be published.  By ratio, I’d say about one in five designs I truly work on makes it to the tabletop.

A recent game I worked on that didn’t make it was another deckbuilding game design I was really excited about (based on giant Kaiju monsters destroying Tokyo, where your deck was almost literally the contents of your monster’s stomach). It sounded much cooler on paper than it actually played. 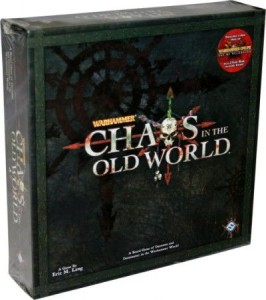 BGQ: That’s a good way to look at things. Better to develop one great game than 100 mediocre ones. You’ve developed a number of fantasy themed games (Warhammer: Invasion, Game of Thrones, Chaos in the Old World) as well as some SciFi offerings (Star Wars, Mutant Chronicles). What is one theme that you’d love to design around but haven’t been able to yet?

Eric: I am very fortunate in that design is my full time job, so if I really want to work on a theme, I’ll just go do it. The only things that get in the way are deadlines for other games, and that’s a great problem to have.

Lately, I’ve been inspired by my travels and spending time with locals in other countries. I’ve got some backburner game designs based on my experiences in Thailand (tourism), Malaysia (corrupt politics), Singapore (Orwellian utopia) and Brazil (not quite sure what the hook is yet).

BGQ: Those sound pretty interesting, some unexplored themes there for sure. On a similar note, is there a certain board game theme or mechanic that you feel is really overdone and perhaps should go on hiatus for a while?

Eric: I think there are several overdone themes and mechanics, but dare not presume to make any such declaration. That’s for the market, not me, to decide.

I’m a huge fan of the Cthulhu mythos, for example, arguably one of the most overdone themes in gaming. But I’ll make a Cthulhu game in a heartbeat if inspiration strikes.

BGQ: Your Call of Cthulhu card game was really well done so I’d be curious to see what else you could do with the mythos. Now with your extensive resume for great games, you probably don’t have a favorite, but if you did, which would it be? When you retire from game designing what do you want your legacy to be?

Eric: My favorite game of my own changes almost daily, and is heavily weighted toward the new thing(s) I’m currently working on. That’s just the nature of game design, I think.

As far as legacy, I do think about this more in recent years. Ultimately I’d like to offer a transformative experience to gamers in the same way that D&D or Magic: the Gathering changed my life. It’s lofty and possibly unattainable in today’s crowded marketplace, but I’ll keep at it.

BGQ: It is a lofty goal, but I hope you attain it. What about other designer’s games? What’s one game that you love that you wish you designed?

Eric:Lord of the Rings: The Confrontation. I’ve been messing around with Stratego variants since I was a kid, but never anything as evocative and elegant as this game.

BGQ: The crowd funding site Kickstarter has changed the landscape for getting games published. There are more games coming to the market now then we’ve ever seen. Do you think this is a good thing? How do you see Kickstarter affecting board gaming going forward?

Eric: As with any maturing creative space, I find there are positives and negatives. Gamers are spoiled for choice now, which is awesome, and the minimum bar for “good game” is so high that nobody can afford to rest on their laurels.

On the other hand, I find the gaming hobby to moving towards breadth over depth. Playing tons of games once or twice rather than a few games often. As a fan of lifestyle games like MMORPGS, trading card games and epic board games, this is a bit disappointing. However, the positives far outweigh the negatives at this time. At least in my view. 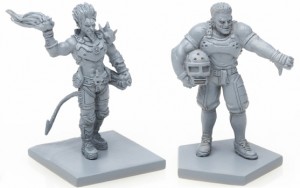 BGQ: Speaking of Kickstarter, you just finished up funding for Kaosball. Despite the short campaign, you raised over $350,000. How did this campaign live up to your expectations? What are you most excited for with Kaosball going forward?

Eric: I am thrilled at the success of the campaign. The thing that excites me most is the passion and dedication of our nascent fan base … all this for a game that hasn’t yet been released!

I think we’re going to have an awesome community, and I’ll admit this was one of my goals with the game design (why the teams are so geared towards particular play patterns). I’m looking forward to seeing how league play evolves once it comes into contact with the general public. I’ve left that aspect of the game as a living rules set, so we can evolve with player expectations over time.

BGQ: I’m really looking forward to trying out Kaosball, so hopefully you can get it to us soon. Moving forward, any hints as to what might be your next Kickstarter game?

Eric: It will be another game with Cool Mini or Not (and my studio Spaghetti Western Games). I can’t give any details, but it will be completely different from Kaosball, or any other game I’ve ever designed actually. I think the game’s target audience could be pleasantly surprised.

BGQ: Can’t wait to see it, you’ve piqued my curiosity now. You have been a professional board game designer for a over a decade now. Do you have any advice for budding designers that would love to follow in your footsteps?

Eric: Before everything else, examine your motivation for game design. Are you a creative person that wants to entertain your friends? Are you looking to become a “name?” Or do you want to make a lot of money? Are you an artist at heart with the need to challenge and captivate an audience with your message? All of these paths are, to varying degrees, valid. And everyone has a unique combination of them.

Don’t listen to anyone who says “don’t quit your day job.” Sure, it’s always wise to understand an industry before you leap in, but happiness is the key. If you fully understand your motivations, you can align your career on a path that best suits you.

Everything else is process.

BGQ: We’ll finish up with a fun questions. If you could set up your ultimate gaming session and play a tabletop game with anyone in the history, living or dead, what game would you choose and who would you play it with?

Eric: I think I’d enjoy playing a game with trivial decision-making like Candyland or Snakes & Ladders for money with Sun Tzu. As ridiculous as it sounds, I think the experience (one of history’s greatest strategists outside his comfort zone in a completely scripted, random game) would be fascinating. And enlightening.

That about wraps it up for our time with Eric. I wish I could have ask him many more things, but I really appreciate him taking time to answer the ones he did. I look forward to what’s coming down the pipeline for his next game and I’m really looking forward to getting my hands on Kaosball. I hope you enjoyed his answers as much as I did.

If you’d like to pick up a copy of one of his past games, here are some of our favorite Eric Lang games: 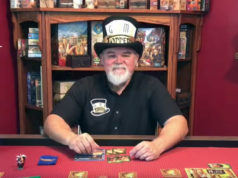 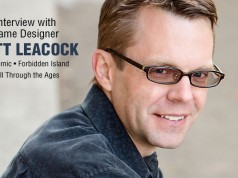 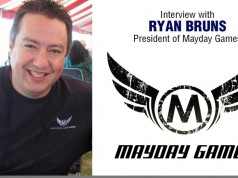