We review Drop Squad, a dexterity and physics board game published by The Drop Squad. In Drop Squad, players are trying to get marbles to drop into their scoring baskets at the bottom of the track. 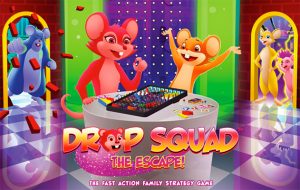 There’s something gratifying about the anticipation of things falling down from high places, and the title of this game is fairly accurate in describing the thrill. When this game first appeared, it only took the keywords “marble” and “drop” for me to jump on it. Paired with the idea of mice scurrying out of a laboratory, it was too cute to pass up.

Drop Squad is a dexterity and hand management game for 2 to 5 players that takes about 30 minutes to play. The best experience is with five players for maximum crowding, chaos, and confusion.

Once you’ve taken out the massive game board from the box, decided on the fate of the angle of this board and where everyone’s goal is, you’re all ready to begin! Cards in the deck determine what type of ramp piece you can place on the board: short (1), medium (2), or long (3). There are also other cards that can help you navigate around a bad hand or give you opportunities to score more since there are no chances to get new cards. Not all placement options for the ramps are possible for all lengths, so both the options in your hand and the order in which you play them are important.

After that phase, known as the Card Play Round, we proceed to the Drop Round where we start dishing out all of the points by releasing marble balls from the top row. This is also the part where you squirm, wondering if any of the assumptions you made about physics during the Card Play Round were correct.

Marble ball colors do not need to match the goal they land in, so redirecting opponent pieces down the ramp to your goal still gains you points. Each goal has a place to keep point pegs throughout the game so no one forgets who is in the lead. Actions and scoring continue until a specific number of rounds have passed based on the number of players. Then whoever has the most points wins!

First off, the rulebook for this game is very messy and disorganized. It’s almost better to just skim it, figure out how many cards everyone gets, and start playing while making mistakes along the way. The placement restrictions are wordy and scoring descriptions were not easy to locate. We were convinced that there should be some kind of reward for making it into your own goal and it took several reads before we concluded that the game didn’t care.

Now that the rulebook is out of the way I wanted to specifically note that I’m an adult. I may not act like it all the time, but this game is clearly made to be played with younger children which I did not have the chance to do. That being said, if I put on my child-like glasses, I can see how it would be fun to try and guess where the best placement of my goal would be and the construction of ramps going forward. I have to admit that it was at least a little fun to try and talk others out of the co-creation process on the board, convincing them to take their turns differently for their “best interest”. Features for ramps and ramp placements such as whether the ball would bounce versus roll down, obstacles that existed on its path towards a goal, and other forms of experimentation with speed was interesting.

But as an adult, it was incredibly frustrating to try and look all smart, thinking I knew anything about how the marble balls would behave once released during the Drop Round. I almost wish I had the level of wonder and abandon that a child would have playing this game than I had when I did end up playing the game. I even tried things haphazardly and got more points than I did when I was actively thinking! There’s even a card in the game called “Pivot” which allows you to try and update a ramp placement, so there was yet another opportunity to try and be smart that failed miserably. It quickly became more about creating situations in which you effectively redirect everyone to your goal and not theirs rather than creating ways for you to always score on your turn. Scoring on other’s turns was crucial and I didn’t realize that until later.

Everything leading up to the Drop Round felt mechanical. At times, it felt clunky gauging how to assemble things. The first turn wasn’t like this due to novelty but after failed rounds of not scoring, it felt like a complete chore and equally futile.

Despite my complaints, I was surprised to find that I really want to like Drop Squad and will definitely be trying this out with children next time. At a minimum, I’d really like to see how kids try and think about some of the more simple physics elements that the game has to offer with regards to the length of the ramps and the placement restrictions. In the end though, the scoring in Drop Squad is boring and the only rewarding segment is during the game when the marbles are falling down the board.

Final Score: 2 Stars – If you have children in your life or you personally are child-like, then witnessing the organized rolling chaos in this game will be perfect for you.

Misses:
• Doesn’t quite teach physics as it claims
• Haphazard and unfair scoring
• Unintuitive construction on assembly