We review Dizzle, a roll and write board game published by Stronghold Games. In Dizzle, players will be drafting dice each round trying to X off spaces on their player sheet. 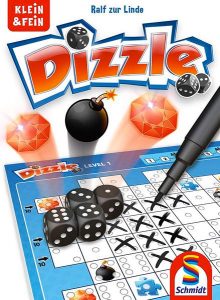 Dizzle is a new roll and write game. I’ve written lots of introductions to roll and write games. About how they remind me of playing Yahtzee with my grandma. And about how hot the mechanism is. The increasing amount of depth in games that make use of just some dice and a pen-and-paper.

Well, Dizzle is all those things. And it was on the Spiel des Jahres recommended list this year. So time to jump back into the world of roll and writes and see what makes this one different.

In Dizzle, you’ll be given a sheet of paper with a couple of pre-printed X’s and a lot of square boxes showing both a die value and, potentially, an icon that will score points. Each round you’ll roll a set number of dice—varies by player count—and draft around the table. The first die you place each round must be adjacent to an X and every subsequent die must be adjacent to an already placed die.

When it gets around to you, if you don’t like any of the options in the current pool you can reroll all of the available dice. If you can legally place any after rerolling, you must pick one and place it. Otherwise, you have to take a die you previously drafted and put it back in the pool. Alternatively, you can just play it a bit safer and pass, but you will be out of the round.

It is possible to place your dice during a round in such a way that it is surrounded by already X-ed off squares. When this happens, you can jump your next placement anywhere adjacent to an X, similar to the initial placement of the round.

When all players have passed, the round ends and players get to X out any space where they have placed a die. Some spaces score points based on the icon, while some rows and columns on the sheet will score if the entire thing is X-ed off by the end of the game.

Dizzle comes with four different levels. The first is pretty basic with gems to aim for and a few bombs that reward you for getting to them before other players. As you try harder levels, you’ll encounter locks that can only be open if you’ve previously crossed off the key and checkered flags that give points based on the order players cross it off. The final couple of levels even add rocket ships that allow you to cross off planet squares on unconnected islands.

After a predetermined number of rounds the game ends. Players score points based on when they were able to successfully complete and the player with the highest score is the winner.

What makes Dizzle so interesting is the amount of thought that went into designing these levels. Each die you draft throughout the game is a meaningful decision. As you approach the icons that score significant points, you’ll find there are only a few values of dice that will work and can quickly find yourself stuck. Placing dice in the middle of the level is often less risky, as there are more adjacent values to expand into, but you won’t be scoring a ton of points.

You should also be thinking about what dice are going to be left in the pool when you make your selection. Maybe the path you want to take requires a 5, then a 3, and a 2. But there aren’t any 2s or 3s in the pool. Taking the 5 means you’ll likely be rerolling and leaving it in the hands of the dice gods.

As you work through the levels it becomes even more difficult. The final level includes an island that can only be reached by a rocket that then counts down in a single column—4, 3, 2, 1. If you place a die on that 4-square your only legal placement for the round is a 3, then a 2, then a 1—in that exact order. Other players are very unlikely to let you accomplish that easily, but it is worth a significant number of points if you can make it happen.

This is where the “jump” rule really becomes a thing of beauty. Ideally, you’ll make a few safer placements early on in the round but wall yourself off so that you can jump one of your final dice. Completing that column slowly over multiple rounds is a much safer, but harder to pull off, option.

You aren’t just stuck when the dice don’t come up with what you want either, you always have the option to reroll all of the available dice at the start of your turn. Even if there is a die you could place, if you prefer a different value that isn’t currently available, you can try your luck. You are stuck placing a die after the reroll if able, or losing one if you can’t. But the reward doesn’t come without some amount of risk.

There is a reason Dizzle was recommended by the Spiel jury. It’s not just another roll and write game. It feels fresh and, although it’s quite simple to teach, it has a surprising amount of strategic decisions to make. The increasingly difficult levels make for a fun challenge and the drafting around the table can be cutthroat.

For fans of roll and writes or just drafting games in general, Dizzle is a can’t miss. The biggest downside is that after you’ve played all of the levels several times you lose a bit of the discovery element. But more levels are coming later this year and for $20 you will certainly get your money’s worth.

Final Score: 4.5 Stars – A unique drafting game that feels like a press your luck game and includes 4 completely different experiences.

Hits:
• Drafting from a shared pool with the ability to reroll anytime makes for lots of player interaction.
• Each level gives a unique experience.
• The rule allowing you to jump when your selected dice are completely locked in allows for clever plays.

Misses:
• You’ll wish there were more levels to experience.